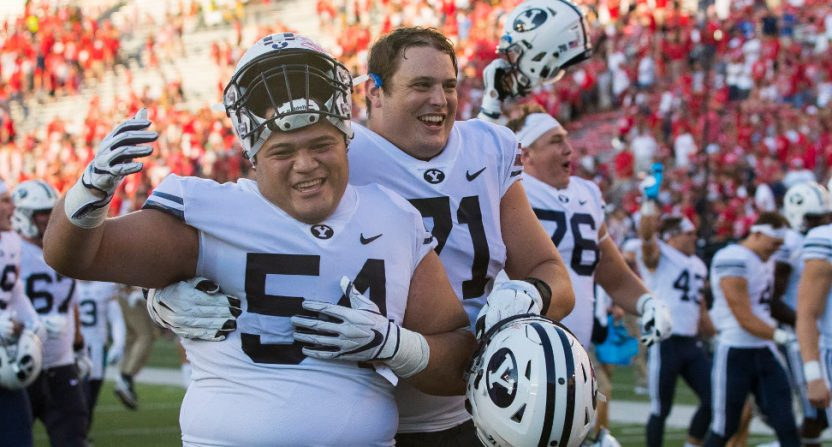 BYU’s upset of No. 6 Wisconsin will certainly send some shockwaves throughout the college football nation. An upset at home by one of the Big Ten’s top contenders before conference play even opens throws a bit of a wrench in the plans for Wisconsin (and potentially the Big Ten). This is a big win for BYU, and with more challenging games still to come in Big Ten play, Wisconsin will have to dig deep to avoid a second loss the rest of the year.

It almost didn’t have to be that way either, but the football gods were in a good mood for BYU, not punishing the Cougars for some questionable timeout usage in the final minute of play in Madison.

BYU head coach Kalani Sitake even gave the Badgers a chance to stay alive until the football gods ruled in his favor after a questionable decision to freeze senior Wisconsin kicker Rafael Gaglianone.

BYU had three timeouts with 41 seconds to play before Wisconsin could attempt the potential game-tying field goal. Considering the situation and the possibility BYU would have some time to move their offense into position for their own field goal as time expired, Kalani Sitake chose to burn a timeout to try freezing Gaglianone. Not content to use just one of his three timeouts, Sitake showed he was OK playing for overtime if necessary by burning a second timeout.

As it became visible Sitake was OK going to overtime if the situation called for it, I felt the need to share my frustration with what seemed to be some questionable coaching in my mind.n

This is stupid, BYU. There’s 41 seconds left! You’re going to get the football again. You just wasted one timeout, arguably two timeouts.

This was not the final two or three seconds of the game. BYU was going to get the ball back one way or the other after the Wisconsin field goal. And with Tanner Mangum at quarterback, you just never know. Remember, this is the same quarterback who stunned Nebraska on the final play of the game with his arm in the 2015 season opener.

Of course, Mangum isn’t quite the same player he was a few years ago, and expecting him to throw a Hail Mary once again for a big win would be unwise. Mangum only passed for 89 yards in the game. But BYU wouldn’t be in need of a Mangum miracle. They just would have needed to get into field goal range.

Naturally, it all worked out for BYU and Sitake, and he gets to have the last laugh. But having the result fall in your favor doesn’t necessarily mean Sitake made the right call. How much the upperclassman kicker was affected by the two timeouts is anyone’s guess. Gaglianone was the nation’s fourth-best field goal kicker in 2017, converting 16 of 18 tries. Sitake playing for overtime as a safe play worked out, but it may have put his team in a difficult spot.

BYU’s defense was showing signs of getting tired and running out of gas. When Alex Hornibrook breaks loose for a 16-yard run on a defense, there is a loss of energy on display. Had the kick gone good and BYU failed to get into position for a field goal of their own, the odds may have favored Wisconsin in overtime. Jonathan Taylor was held scoreless for four quarters, but would he have scored in overtime?

Fortunately for BYU, this is all a bunch of “What if” speculation that has no impact at this point. BYU won the game and will now move on. And if the situation presented itself again, Sitake may very well feel inclined to burn a couple of timeouts even if it is not the best possible decision to make.