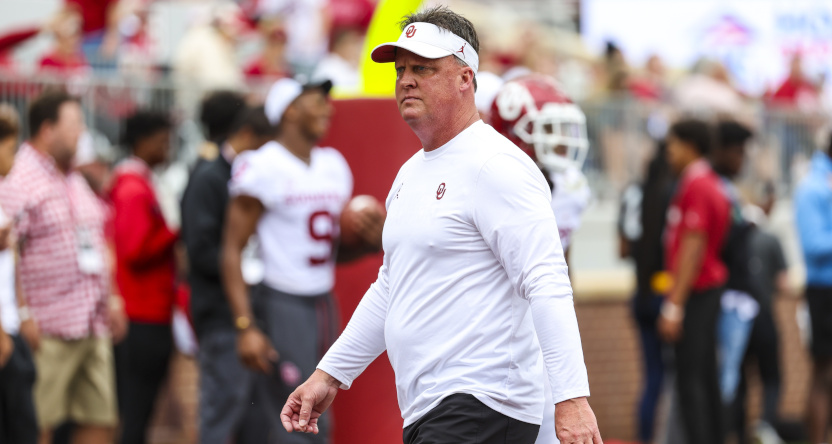 Less than a month before the Oklahoma Sooners‘ first game of the 2022 season, their wide receivers coach has resigned. That would be Cale Gundy (brother of Oklahoma State head coach Mike Gundy), who played quarterback for the Sooners from 1990-93, started his coaching career there the next year as a graduate assistant, and had been an assistant there since 1999. On Sunday night, Gundy (seen above during the Sooners’ spring game in April) announced his resignation, saying he did so not to be a distraction after reading a “shameful and hurtful” word aloud off a player’s iPad during a film session this past week:

Here’s the key part of that statement:

“Today, with great anguish, I announce my resignation. I apologize to those who are disappointed by this news.

I owe it to Sooner Nation to be transparent about what led to this decision: Last week, during a film session, I instructed my players to take notes. I noticed a player was distracted and picked up his iPad and read aloud the words that were written on the screen. The words displayed had nothing to do with football.

One particular word that I should never — under any circumstance — have uttered was displayed on that screen. In the moment, I did not even realize what I was reading and, as soon as I did, I was horrified. I want to be very clear: the words I read aloud from that screen were not my words. What I said was not malicious; it wasn’t even intentional. Still, I am mature enough to know that the word I said was shameful and hurtful, no matter my intentions.

The unfortunate reality is that someone in my position can cause harm without ever meaning to do so. In that circumstance, a man of character accepts accountability. I take responsibility for my mistake. I apologize.

…I recognize this is a critical moment for Oklahoma football. This team—its coaches, players, administrators, and fans—do not deserve to be distracted by off the field matters while working to continue the tradition of excellence that makes me so proud to be a Sooner. I won’t do the program I love the disservice of distracting from this mission. Effective immediately, I am stepping down.”

It’s unusual to see a coaching change made this soon before a team’s season under any circumstances, and even more so when it’s under these particular circumstances. The Sooners will begin their 2022 campaign against the UTEP Miners on Sept. 3.