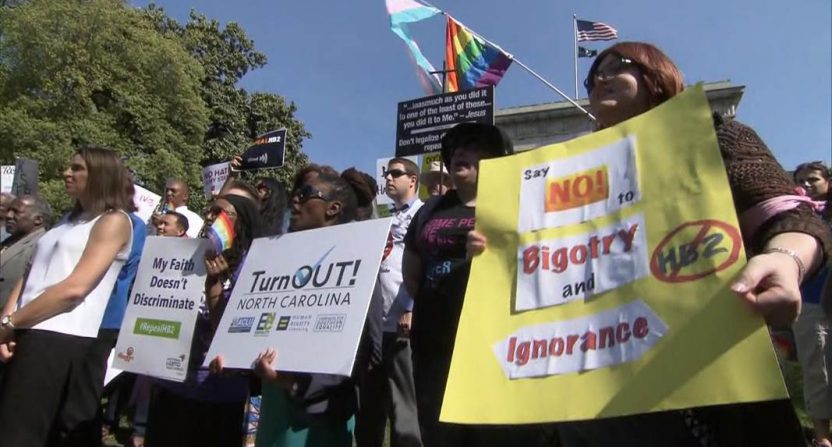 The NCAA’s stance against holding championships in states with laws seen as anti-LGBT, such as North Carolina’s HB2, has been well-publicized. There was even a report Monday that the NCAA may ban North Carolina from consideration for championships for five more years if the bill is not repealed.

The impacts on college sports go well beyond championships and well beyond North Carolina, though. The most recent example is a report from Daniel Mano of The San Jose Mercury News on how a newly-implemented California law prevents state-funded schools (including Cal, UCLA and other schools in the UC and CSU systems) from scheduling further games against schools from four states:

The new California law, which went into effect Jan. 1, prohibits state-funded or state-sponsored travel to states with laws deemed discriminatory against the LGBT community.

California Attorney General Xavier Becerra reportedly determined it applies to Kansas as well as Mississippi, North Carolina and Tennessee — which stops Cal or other state schools from scheduling road games in those states in the future.

As per Peter Hancock of the Lawrence Journal-World in Kansas, that’s already led to Cal and Kansas having to break off discussions of a future home-and-home series in women’s basketball:

University of Kansas officials confirmed Friday that athletic teams from public colleges and universities in California are no longer allowed to travel to schools in Kansas because of a “religious freedom” law in Kansas that says campus student groups here can discriminate in their membership against people who do not share the group’s religious beliefs or practices.

That includes religious groups that ban gay students from joining due to the group’s religious beliefs.

KU Athletics spokesman Jim Marchiony said KU had been in preliminary talks with the University of California-Berkeley to schedule a series of “home-and-home” games. But a new law in California that took effect Jan. 1 now prohibits that.

“Cal said they couldn’t do it,” Marchiony said.

There’s a good overview of the California law (AB 1887) and the specific laws at issue in Kansas, North Carolina, Tennessee and Mississippi from Avinash Kunnath at California Golden Blogs.  It’s also important to note that this doesn’t currently affect games that were scheduled before January 1, so, for example, Cal football will still play at North Carolina later this year and at Ole Miss in 2019 (for the moment at least).

Tthis could have major implications for collegiate scheduling in general, though. This isn’t just about Cal and UCLA, but is also about four other Division I UC athletics programs and nine Division I Cal State programs (to say nothing of the Division II and NAIA programs in both systems). It looks like all of those schools will no longer be able to schedule games against schools from these four states (which is a significant number in its own right). These moves can also impact championship hosting; the NCAA cited five (non-California) states’ laws banning state-funded travel to North Carolina as part of its September decision to pull championships from that state. The college scheduling dance is already a complicated one, and now it’s going to get even tougher.