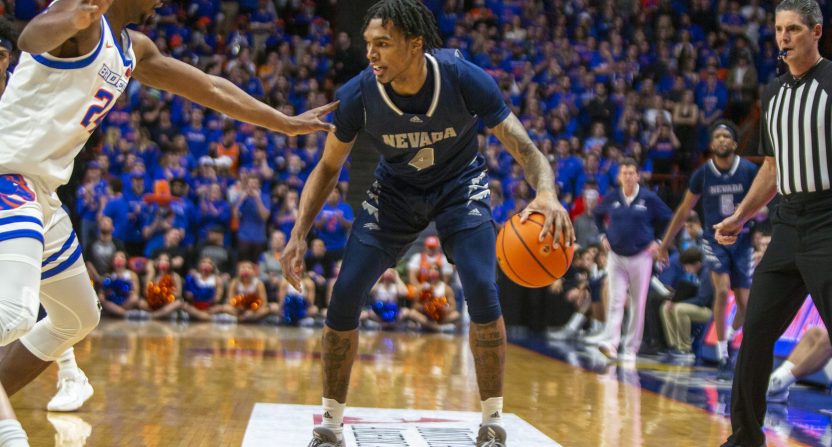 The Cambridge brothers announced on Thursday night that they’re transferring to Arizona State as a package deal.

“The only time we probably got to play together was pick up or an AAU game here and there so this will be insane.” || Story: https://t.co/uXVrrIywLW pic.twitter.com/Nc5Mt7pclF

Brothers Desmond and Devan Cambridge have committed to Arizona State, they tell @On3sports.

Desmond, a Nevada transfer, and Devan, an Auburn transfer, will team up in Tempe.

When asked why they picked the Sun Devils, Desmond said that ASU’s style of play is “a great fit” and added that he wants to show he can “excel in a Power 5 program.” Via On3:

“ASU is a great fit for me and my brother’s playstyle,” Desmond Cambridge said. “They really push the tempo on offense and love scoring the ball. In this high octane type of system, we will be able to really showcase our athleticism and offensive capabilities. Coach Hurley is a hands-on type of coach who works with you personally on skill development & other aspects of the game to help you reach your full potential. Not to mention, he has played at the highest level of the sport and has a prestigious record within the basketball world. Learning from a guy like that is priceless and rare. Although my brother has already played in the SEC, I want to show that I excel in a Power 5 program. I think we will be able to compete for a championship in the Pac-12, and be a NCAA tournament team. I love the coaching staff, city of Tempe, and needed to be in a place that’s warm (laughs). This is the right fit for him and myself.”

“Coach Hurley is a hall of fame coach,” Devan said of why they chose Arizona State. “He knows how to develop his players personally and from what I’ve seen, he’s a great person.”

Desmond averaged 16.2 points (and has averaged 16.4 points over his four-year college career), 5.1 rebounds, 1.8 assists, 1.7 steals, and 1.1 blocks at Nevada in the 2021-22 season. The 6’4″ shooting guard is known to be a lethal scorer in spurts, as shown with a 36-point effort vs Colorado State (a 6-seed in the NCAA Tournament) in February. He ranks 26th on Evan Miya’s list of players that have been available in this year’s (loaded) transfer portal.

Devan — the younger brother — averaged 5.3 points and 3.6 rebounds this season for an Auburn team that was a 2-seed in the NCAA Tournament. The 6’6″ guard/forward started 14 games and averaged 19.6 minutes per game. As a sophomore in the 2020-21 season at Auburn, he averaged 8.9 points and 25.3 minutes per game. He ranks 45th on Evan Miya’s list of transfers in this cycle.

So, these are two big-time additions for Hurley’s Arizona State squad. Additionally, they have a four-star high school recruit on the way in point guard Austin Nunez.