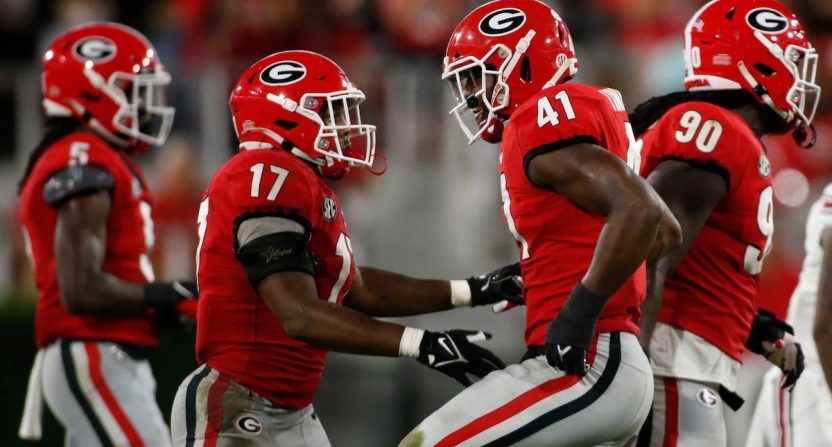 In college football — and in particular, the Southeastern Conference — there is a pecking order. Georgia routinely has carved out this identity for itself in the modern age of the sport. Always good, but never quite good enough.

A loss here. A loss there. Suddenly, the dream of a national championship is over. But this could finally be the year.

Holy Herschel Walker. The top-ranked Bulldogs (10-0, 8-0 SEC) have their best shot at ending the decades-old drought in Athens. This tradition-rich program hasn’t won it all since the 1980 season when Walker was running wild. Considering how much the landscape has changed, that might as well be the Stone Age. That was long before there was any semblance of a playoff or even a title game.

Sports Illustrated‘s Pat Forde said that the national title is the Bulldogs’ to lose.

“(They) are the best team. The deepest team. The most physical team,” Forde wrote. “The team with the most experienced talent, having stacked monster recruiting classes on top of one another for years. The most buttoned-up team, in terms of adhering to assignments. And seemingly the hungriest team.”

Georgia is the betting favorite to win the College Football Playoff national championship. With last weekend’s 41-17 mauling of Tennessee, Georgia won the SEC East division, clinching a berth in the SEC Championship Game. The Bulldogs’ regular-season conference schedule is already over.

“You know what I love?” coach Kirby Smart said (via the Forsyth County News) after winning the East for the fourth time in four years. “It’s the men in that locker room beside me. They all know that.

“Nobody thinks they’ve arrived. There are things we can work on to get better at and they’ll continue to do it. Tonight, they went through a tough gauntlet in our league and played well.”

.@GeorgiaFootball continues to be the Allstate Playoff Predictor's most likely team to win the national championship.

Georgia’s remaining regular-season games are non-conference matchups against FCS Charleston Southern (4-5) and Georgia Tech (3-7). After that, there will most likely be a clash of the titans against No. 2 Alabama (9-1, 5-1) in the SEC Championship Game.

The Crimson Tide only needs to beat Arkansas next week to clinch the West. After that, the Iron Bowl against Auburn remains.

Smart is in his sixth season at Georgia. He was hired from the Alabama staff specifically to beat Nick Saban. He’s come close to winning a championship before. In the 2017 national title game, the Bulldogs dropped a heartbreaker, squandering a 20-7 third-quarter lead before falling 26-23 in overtime against Alabama.

Smart, a former defensive coordinator, has built the nation’s most overwhelming unit. The Bulldogs haven’t played a close game since its 10-3 season-opener against Clemson. They have allowed a grand total of 76 points, the fewest in the country. The 17 points scored by Tennessee is the most Georgia has given up, and the Volunteers were still crushed.

As Forde pointed out this week, Georgia’s defense is on pace to set an FBS record for performance against the national scoring average (28.7 points per game). The differential of 21.1 points would break the record for 20.1 set by Alabama in 2011.

The defense has a motto: Nobody In Our End Zone.

“We say nobody in our end zone, that means nobody,” linebacker Nolan Smith told reporters (via the AJC). “I don’t care if we’re playing the New England Patriots. They don’t go in our endzone. That’s just as a defensive mindset.”

Junior inside linebacker Nakobe Dean leads the way. He’s first on the team in tackles for a loss (seven), and second in total tackles (49) and sacks (4.5). According to ESPN analyst Mel Kiper Jr., Dean is a future first-round pick and Georgia’s top NFL prospect for the 2022 draft.

It’s past time to put Nakobe Dean in the Heisman conversation. Been saying it for weeks but his performance against the Vols should prove it.

Georgia looks like the closest to a sure thing we’ve seen in a while. Of course, we’ve also seen this movie before.

Prior to Smart, the program was under the steady leadership of Mark Richt. He spent 15 years in Athens consistently finishing in the top 25, even reaching No. 2 in the final Associated Press poll. But that wasn’t good enough. Not in the SEC.

Eventually, that catches up with you. Richt was forced out in 2015, leading to the hiring of Smart.

Smart has dominated recruiting to rule the SEC East. There’s just the little matter of winning the national championship. And that might mean playing Alabama. Possibly twice.

If Georgia is upset in the SEC Championship by Alabama, the Crimson Tide would leap to No. 1 in the CFP rankings. That could lead to the Bulldogs facing Alabama again in the playoffs. Fun — unless, of course, you’re a Georgia fan.

That’s why Georgia should be rooting hard for Arkansas this week and Auburn next. Because if the Crimson Tide is eliminated from playoff consideration, there’s probably no stopping Georgia’s march to glory.