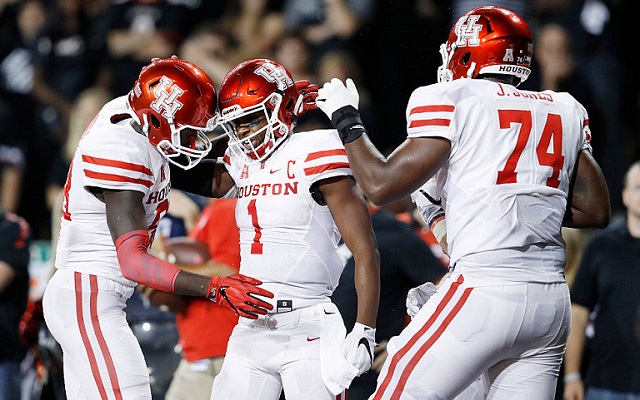 Success is nothing new for the Houston Cougars. The one-time Southwest Conference power was a national title contender in the 1960s and 70s, and briefly jumped back into the fray in the late 1980s as well.

But in the years since the SWC dissolved and Houston headed “down” to Conference USA, that level of success has been far more fleeting. UH went unranked from 1992 through 2008, with just a handful of winning seasons to count in that stretch. Former coach Art Briles started figuring things out, going 10-4 and then 8-4 before departing for Baylor. Then Kevin Sumlin vaulted the team back into the polls in 2009. They were as high as seventh in 2011.

Tony Levine’s tenure was not as successful, but it didn’t wreck the foundation. And that’s how Tom Herman stepped into his first head coaching gig, and proceeded to turn Houston into what they were always meant to be. The Cougars ended that season as a top-10 team, and reached as high as sixth in 2016 before eventually dropping out of the polls.

Despite a home in the Group of Five’s American Athletic Conference, UH has tradition, boosters and support. It also has the resources to spend on athletics, as it’s proved in recent years. The school transferred more than $100 million from academics to sports, with the hopes of earning a “call-up” to the Big 12.

It never came, but now with an re-energized fan base, engaged donors and access to the always-fertile recruiting grounds of the greater Houston area, this is a program well equipped to keep succeeding — and maybe even improve — in the coming years.

Under Herman, the blueprint was established far more than it ever was during the notable tenures of Briles and Sumlin. The #HTownTakeover had Herman picking off top local recruits left and right. Houston attracted the best recruit in Group of Five history, defensive tackle Ed Oliver. They had the best recruiting class in Group of Five history, too. Oliver’s now on the short list of the best players in America as a sophomore.

No, you can’t bank on a top-10 recruit every year if you’re not among college football’s ruling class. But you can find ways to make your program more attractive than its supposed station in life.

Boise State’s done this for well over a decade, using a blue field to attract attention, then quality coaches and an exciting system to win games and bring in more talent. Others like Western Kentucky, Arkansas State and others have found similar niches. Syracuse could be on the cusp of something as another non-traditional power, using its indoor stadium and high-paced offense to create an advantage with Northeast recruits.

So can Major Applewhite take over the Cougars program and push them to continue overachieving in 2017? He’ll have his work cut out for him.

Despite a roster full of talented players recruited by Herman and himself, there are still factors that prevent UH from just winning nine or 10 games every year from here on out. Houston loses a ton on both sides of the ball, including quarterback Greg Ward Jr., who headed to the NFL. The coaching staff was reworked in the offseason as Applewhite took over, too. While Applewhite was on last year’s staff, he still had to find replacements just about everywhere else. The former Texas QB has also jumped relatively quickly from a grad assistant in 2003 to head coach this year.

There’s also the matter of the American Athletic Conference being the country’s sixth-best league, with a slew of recent and exciting coaching hires and a lot of rising programs. Houston’s flush with talent, but plenty of that skill has been on the roster for the last couple seasons. It was plenty to win the conference in 2015, but it wasn’t even enough to win the AAC’s West division in 2016.

Another consideration is the fan base’s renewed expectations — and what happens if and when Applewhite falls short of them. Though the team finished 9-4 last year after a top-15 preseason ranking, the Cougars also beat Oklahoma and Louisville in impressive fashion. That solidified their place as darlings of the college football media, but also put a target on their backs for both opposing teams and the fans, who surely readjusted expectations as high as they would go.

Applewhite will now be battling those expectations each and every week, though at least he’ll still have the pieces to try and contend with them. The 2017 class was ranked 71st overall by 247Sports, and the lauded 2016 class was a record-setting 35th. Oliver’s still on the team. Former blue-chip QB Kyle Allen comes in to replace Ward. Linell Bonner is one of the conference’s top returning receivers after catching 98 passes for 1,118 yards last year.

Houston football can continue to overachieve in the Major Applewhite era, but this year is critical to that process. Easier non-conference games (at UTSA, at Arizona, Rice, Texas Tech) should mean the Cougars can ease into this new regime and the expectations that will come later. But November dates at USF and hosting Navy could derail it all once again.

A nine- or 10-win season is far from a failure, and should have UH trending exactly where it needs to following Herman’s departure. However, if the Cougs exhibit any major signs of regression, their assured success with Applewhite could very well be put in doubt after just a year. The Group of Five’s power structure ebbs and flows. No program’s guaranteed long-term stability. Houston just happens to be the team best situated to buck that trend — if it chooses to.