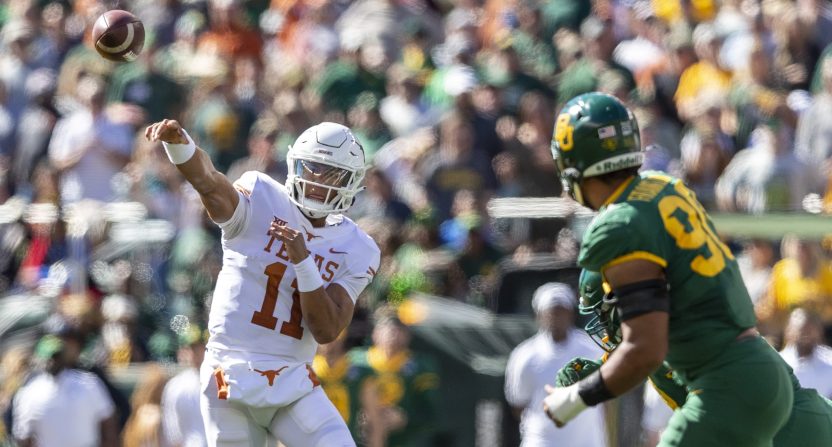 With the news last week that Quinn Ewers was transferring to Texas (the place he originally committed to play), it seemed likely that we might see some of the current Longhorns quarterbacks decide to leave. And that’s what happened on Friday.

Casey Anderson has decided to enter the transfer portal, according to The Athletic.

Texas starting QB Casey Thompson has entered the portal as a grad transfer, @TheAthletic has learned.

Thompson was the starting quarterback for the 5-7 Longhorns this past season after serving as the backup in his first two years. He finished the season going 165-of-261 for 2,113 yards, 24 touchdowns, and nine interceptions. He also ran for 157 yards and four rushing scores. He became the first quarterback in Texas history to throw for five touchdowns three times in a season and the first Big 12 quarterback to throw for five touchdowns and score a running touchdown in a game since Kyler Murray did it in 2018.

As a grad transfer, Thompson will likely be looking to play somewhere where there is an immediate quarterback need. Virginia Tech, TCU, and Houston stand out as potential opportunities.

In the meantime, the announcement brought with it certain reactions from the college football world on social media.

Not a surprise at all with Ewers there, but Thompson had a low key very good season.

8.1 yards/attempt + 28 TD’s and that’s including a couple games he didn’t even start.

Some program is going to pick up a nice starting caliber quarterback. https://t.co/3kPoxjUeDZ

Casey Thompson is in the transfer portal.

Not a complete surprise. He will likely be headed somewhere with a little less crowded QB room. It’s hard to ask someone with limited eligibility left to go through a QB competition for two straight years. #HookEm

Oregon and Arkansas offered before he signed with Texas. Tim Beck (now at NC State) landed it for the Horns https://t.co/khzhlSWfDR

But who is going to start the bowl ga—, wait, I’m getting something in my earpiece https://t.co/eMr4kFZ6sT

Yeah whoever ended up with Ewers was going to blow up their QB room. That’s just how the game works when you go for an immediate starter at a spot. https://t.co/G3CbJcBWPe

Steve Sarkisian might be banking his job on Quinn Ewers next season so it will be very interesting to see how this all plays out for them and for Thompson, wherever he ends up.