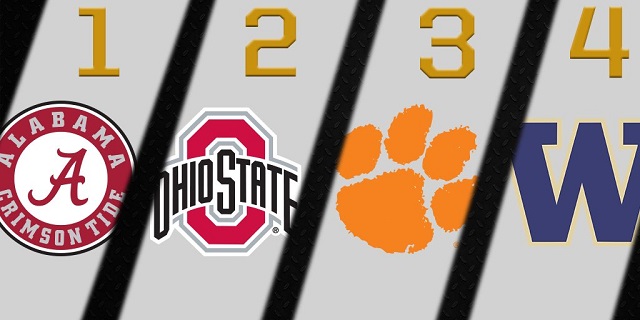 There were several burning questions heading into the committee’s rankings this week. How safe is Ohio State in its No. 2 spot? Is Michigan still alive? Does Oklahoma or Oklahoma State have any chance at all? Is there a possible chance of the Big Ten putting three teams in the Playoff? Committee chair Kirby Hocutt answered some of those questions resoundingly.

Hocutt emphasized that being a “conference champion” only comes into play if the two teams being discussed have very close résumés. This should be a major sigh of relief for Buckeye fans. I have pointed out several times that the committee is in an awkward situation due to the fact that the only teams really in the CFP conversation the past two years were all conference champions. The mandate is to pick the best four teams, and Hocutt emphasized that’s what the committee will do, conference champion or not. Hocutt also added that the gap between Ohio State and Penn State isn’t close.

Hocutt also hinted — though not as strongly — that Michigan is still in play. He said the most discussion came about whether Washington or Michigan should be No. 4. This — especially the way Hocutt said it — has led many to react and think that Michigan might be able to jump Washington if the Huskies win over Colorado in unimpressive fashion.

Quite frankly, this is absurd. No matter how close it was or how much debate it took, the committee eventually decided to stick with Washington at No. 4. Picking up a win over No. 8 Colorado won’t hurt the résumé in any way. If Washington jumped ahead of Michigan this week, the Huskies will stay ahead again next week week as long as they beat Colorado.

Speaking of Colorado, the Buffaloes are in a bit of a sticky situation within the committee. They are currently behind Michigan, who beat Colorado early in the season. Michigan is barely behind Washington. If Colorado beats Washington this Friday night, it’s hard to see how the committee would jump Colorado over the Wolverines. It’s possible, but Colorado’s résumé — which would include three wins — would not stack up well against Michigan and its three wins over Top-10 teams, including a head-to-head victory over Colorado.

The real question as to who can jump Michigan comes from the two teams that will play in the Big Ten Championship Game. Right now, Wisconsin and Penn State sit immediately behind Michigan. There is no real way to know how close that gap is in the eyes of committee members, though, and whether another quality win will be enough to jump Michigan. There was no hint there, as the committee does not “look ahead” to potential future results, but that gap may be the biggest question on Selection Sunday if Clemson or Washington loses. Finally, if both Clemson and Washington lose, it does seem very likely that we will see three Big Ten teams in the Playoff. Nothing in these rankings hints otherwise, and it would be hard to see Colorado or the Bedlam winner jumping that high.

As we move down the rankings, there are some interesting notes. Florida State jumped Louisville, even though the Cardinals have a lopsided head-to-head win. Hocutt explained that Florida State has a much tougher SOS, and Louisville has only beaten one team with a winning record (Florida State). On the other hand, that makes me wonder why Louisville is still so high at No. 13.

The bottom of the rankings really interested me, though, as a whopping nine of the teams ranked 11-15 lost last week. What would the committee do with all of those teams? Unfortunately, with a few exceptions, the committee essentially defaulted to a “poll mentality” for the last 11 ranking spots or so. The few teams that won slid up into spots vacated by teams ahead of them. The teams that lost dropped — sometimes more, sometimes less — depending on how bad the loss was. This is not entirely unexpected, though. One thing that the committee has been very consistent about is that it clearly puts less thought into the bottom of the poll than the top.

There are a few important points of interest, though. Utah, after a close loss to No. 8 Colorado, became the first team in the three years of committee rankings to move up after losing. The Utes jumped two spots. But makes perfect sense. Utah’s loss was much better than several teams ahead of it, so more teams from ahead (Nebraska, Boise State, Tennessee, Houston) fell behind the Utes than jumped them from behind (only Stanford and Navy).

There are a few questionable rankings at the bottom. LSU, with just three wins over teams with records of .500 or better, jumped all the way to No. 20, ahead of both Houston and Pittsburgh (two Top-15 wins each, Top-10 in Pitt’s case, though both do have worse losses). The omission of South Florida, sitting at 10-2 with no bad losses, a ranked win over Navy, and a decent win over Memphis (who the committee obviously respects enough to not drop Houston out completely for losing to), is not too glaring, but seems a bit questionable.

Speaking of Navy, Hocutt mentioned that Navy is close behind Western Michigan right now and has two more games remaining, both against bowl teams. Conventional wisdom is that Western Michigan is pretty safe for the Cotton Bowl with a win over Ohio this week, but Navy could make it interesting if it impresses against Temple (not to mention that Navy’s loss to Air Force doesn’t look nearly so bad anymore).