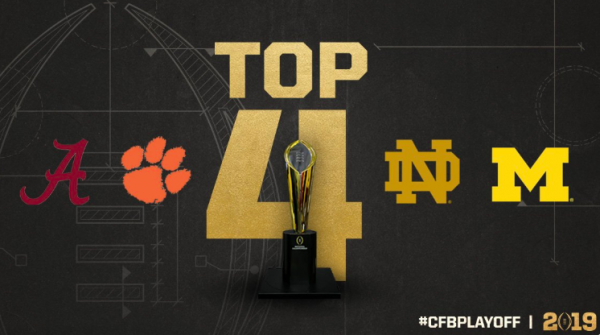 There was no change in the entire Top 10 of the College Football Playoff selection committee’s rankings this week. That might seem obvious to college football fans. After all, no teams in the Top 10 lost. So why should the Top 10 change at all?

Of course, that goes against the selection committee’s entire premise–that it re-evaluates every team every week. The classic polls never used to do that. The selection committee is not supposed to be like those polls. You should expect to see some movement in any given week. Resumes are constantly changing.

Is your team in? 👀 pic.twitter.com/wBq7fDvI8Q

For example, Washington State’s resume got better this week, with Utah moving into the rankings. LSU’s got a bit worse. Is there enough to flip those teams? Georgia picked up a much better win than Michigan, and the overall resume got better. Maybe UCF’s improving resume is enough to overcome one of the one-loss P5 teams in front of it?

There wasn’t necessarily reason to move any teams, but the total lack of movement says that the committee essentially took this week off. Especially when you look at the total lack of movement at the bottom of the rankings–the only team to jump another team that didn’t lose was Penn State over Texas–it tells us the selection committee didn’t really do much re-evaluating this week.

We have seen weeks like this in the past few seasons. It’s not really much of a big deal. The selection committee absolutely missed a chance to send some messages, but that’s about it. As long as they’re actually re-evaluating resumes at the end of the season, taking a lazy week this week doesn’t matter much.

Rest of the rankings

UCF appeared at No. 11, the highest a Group of 5 team has ever been. As I said two weeks ago, UCF’s ranking is completely baffling. UCF has a weaker strength of schedule and overall resume than other Group of 5 teams in the past. The Knights haven’t blown out bad teams the way that, say, Utah State has this year, or Marshall did back in 2014. UCF is absolutely receiving preferential treatment from the committee this year, almost certainly due to last season’s undefeated record. That’s not what the selection committee is supposed to do, and the least it can do is admit that.

Other than that, teams are just sliding into place. It seems like committee members finally ran out of Power 5 teams to rank, so they stacked the back with Group of 5 teams. Utah State and Cincinnati certainly deserve their rankings–they deserved to be ranked last week also. Boise State probably doesn’t–that loss to Oklahoma State was really ugly–but the committee seems to be giving the Broncos some name recognition.

The only noteworthy flips in ranking are Penn State jumping Texas. That actually makes sense. Not only has Texas struggled recently, but Penn State had a better resume coming into this week anyway. The other flip was Mississippi State falling behind Boston College, after each suffered a (relatively) close loss to a Top 2 team. Maybe the committee liked how Boston College looked a little better, or maybe they actually did compare resumes this week. Or maybe they just didn’t want any four-loss teams ahead of any three-loss teams.