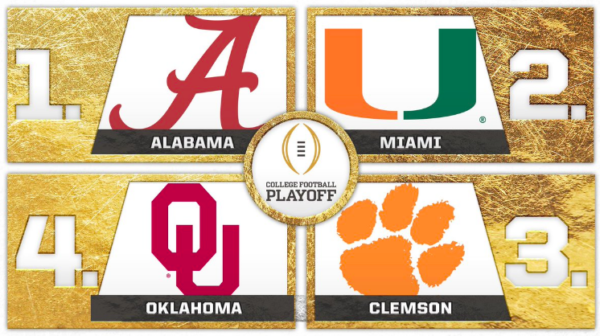 After a lackluster week of college football, the CFP selection committee’s rankings didn’t change much. There was slight movement at the top, a change in the middle that defies understanding, and an odd decision at the bottom.

The first big–yet meaningless–change in the rankings is Miami’s jump over Clemson. On the one hand, it certainly makes sense if the teams were close last week. Miami picked up a win over a solid team (6-5 Virginia), while Clemson beat an FCS team. However, last week Kirby Hocutt mentioned that Clemson was ahead because of its nation-leading six wins over teams with winning records, in addition to the fact that Kelly Bryant was injured during its loss to Syracuse. Well, Clemson still has a nation-leading six wins over teams with winning records, and Kelly Bryant was still injured during the loss to Syracuse.

This week, Hocutt said that Miami has strengthened its resume over the past three weeks. Rece Davis specifically asked about why Miami jumped Clemson, and Hocutt didn’t give a specific answer. All of what he said basically amounted do, “That’s what we think this week.” It didn’t explain much, but maybe there is not much to explain. He did say that the entire top five are close together, though, so maybe little things just changed people’s minds.

Every single other change in the poll was a “poll mentality” change. No resumes were re-evaluated, because there were no shifts in the middle of the rankings. Well, except one change. The committee made one mind-boggling decision that really only served to belie the idea that Group of 5 teams are treated at all equally in this system.

Mississippi State, somehow, jumped UCF. The Bulldogs beat a bad Arkansas team this week. Arkansas, if you remember from a few weeks ago, almost lost to Coastal Carolina, one of the worst teams in the country. Mississippi State needed a late touchdown to escape Fayetteville with a win. UCF, meanwhile, destroyed Temple. Temple isn’t great–the Owls are 5-6–but it’s not significantly worse than Arkansas, if at all.

Why would Mississippi State jump UCF? I honestly can’t explain it. None of Mississippi State’s earlier wins on the season got better. None of UCF’s wins got much worse (FIU and Navy both lost to good teams), but the difference between the two can’t have been limited to that. If the committee isn’t going to honestly rank Group of 5 teams, it should give up the pretense. UCF certainly deserved to be higher in every ranking so far, but Mississippi State jumping the Knights is inexcusable. If Mississippi State’s resume is better this week, then it was much better last week. And if it wasn’t better last week, then there’s no explanation possible for this week’s decision.

Hocutt says the problem for UCF is the schedule. They put it side by side with Mississippi State's this week. Bulldogs' 3 losses were to top 7 teams.

Why is South Carolina in

Two teams at the back of the rankings lost this week, and both dropped out. N.C. State was upset by Wake Forest, and the Wolfpack tumbled out of the rankings with their fourth loss. That’s pretty reasonable. Michigan lost to Wisconsin, and the Wolverines fell behind (at least) South Carolina and Virginia Tech. That decision is not reasonable.

If the committee is honestly evaluating resumes, then the number of losses doesn’t really matter. At some point it does, but it’s not the major sticking point. The committee utilizes this–Mississippi State is so high because its losses are all to top teams, and Auburn is ahead of Georgia even though the Tigers have more losses. So why does that matter with Michigan?

Michigan lost to the No. 5 team by 14 points. It was a close game, and the Wolverines were definitely in it until their quarterback got hurt. Such a loss is expected, and it shouldn’t hurt a resume much, if at all. The No. 24 team should lose to the No. 5 team.

South Carolina, meanwhile, beat an FCS team this week. Such a win should not improve a resume in the slightest. The Gamecocks’ biggest win this season is over N.C. State, which just got worst this week also.

Of course, the biggest proof for this is the total lack of movement this week. If you’re honestly evaluating every resume from 1-25, then there should be some shifting in the middle. Wins get better or worse every week. The “blank slate” is never the same from one week to the next. So why did the committee spend this entire weekend acting like it just did?