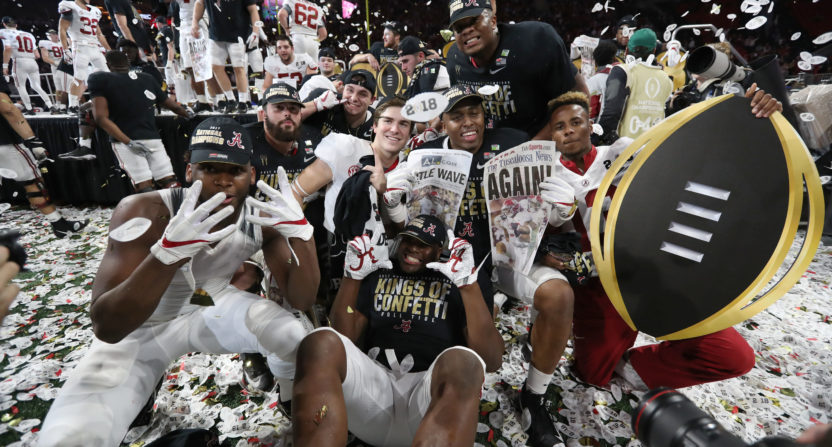 The seasons will continue to go by and teams will rise and fall. There are very few consistent trends in college football, but Nick Saban having his Alabama team equipped to compete for a national championship is one of them.

On Monday night, Saban wrapped up his fifth national title at Alabama, and his sixth overall to move into a tie for first place for the most national championships in the AP poll era. He tied none other than Paul “Bear” Bryant, another iconic Alabama head coach who, until Saban came along in Tuscaloosa, was widely considered to be the best coach college football has ever seen.

Move over Bryant, because Saban ain’t done yet.

Nick Saban: wins 6th national title, tying Bear Bryant for the most by a head coach in Poll Era (since 1936) pic.twitter.com/2tnTZj2YbM

You didn’t need to see Alabama win an overtime classic against Georgia in the College Football Playoff national championship game to know Saban is already one of today’s top college football coaches. Many would argue he is the best. With six national titles to his name, there is little room for arguing otherwise at this point, even if we know how good contemporaries like Urban Meyer and Dabo Swinney are. Saban has won each of his last meetings against those coaches and continues to dominate the competition with unparalleled regularity.

Alabama is 41-3 over the past three seasons with two national titles to show for it. The Crimson Tide haven’t lost more than two games in a season since 2010, Saban’s fourth season at Alabama. At the time, there was just one national championship to show off in the football building’s trophy case. My, how far Alabama has come in a relatively short period of time.

Saban has coached Alabama to four more national titles since then, bouncing back from back-to-back losses in the Sugar Bowl to win two of three national titles. Every time there is a slight ounce of doubt about Alabama, Saban proves otherwise.

Alabama is not a program without flaws and the Crimson Tide are not invincible. We have seen that in the brief College Football Playoff era. Sometimes, Alabama will lose, as they did a season ago against Deshaun Watson and Clemson. Saban knows how to handle losing, though, and learns from the mistakes to make his program even better in the long run. What’s scary is that this Alabama team didn’t lose and may find ways to be even better next season.

Saban’s latest national championship was his most unique yet in that he made a quarterback switch to a true freshman at the start of the second half and had a freshman lead the team in rushing and receiving. This time, Saban’s Crimson Tide was blanked and overpowered in the first half. This time, Alabama had to work their way back from 13-0 and 20-7 deficits. Everything about this national title run was different for Alabama, who didn’t even win their own division this season.

Alabama now returns to a familiar position in 2018 by trying to become the first team of the College Football Playoff era to win back-to-back national championships. It might happen. It might not.

Whatever happens a year from now, however, Alabama will continue to be the gold standard in college football. In order to be the best, you’re going to have to beat the Crimson Tide. Alabama has won two College Football Playoff national championships. The other two programs with a national title in the playoff era, Ohio State and Clemson, had to beat Alabama to get there.

Good luck, college football world, because Alabama is not about to fade away any time soon.