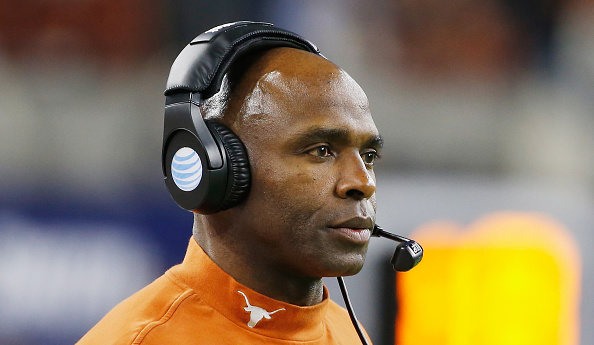 Remember when Charlie Strong was off the hot seat thanks to a big win against Notre Dame? Oh, how quickly things have swung back the other way.

Following a 49-31 loss at Oklahoma State this past weekend, Strong’s Texas Longhorns have dropped to 2-2 on the season and the vultures are allegedly circling overhead. Yes, in just a matter of three weeks following an opening weekend win on the national stage against Notre Dame, Strong’s future at UT hangs in the balance.

Why else do we wake up on Monday morning and hear that Strong has decided to take over defensive play-calling duties from defensive coordinator Vance Bedford?

Then again, what does Strong have to lose? His back is clearly against the wall heading in to a critical matchup with another struggling college football power — Oklahoma. Both come in to the rivalry game with two losses and a third is likely the end of the road for Strong at Texas.

Or so the national media narrative goes.

There is also the matter of the fact that Texas’ defense has given up at least 47 points in three of its first four games of the year. Giving up those kind of numbers make it difficult to win football games, and Texas fans along with plenty in the national media have grown tired of hearing about young talent needing to grow up.

UT’s young defense has been embarrassing for a head coach who built his reputation off of building very good defenses at Florida as defensive coordinator and as Louisville Cardinals head coach. Yet, the defense this year at Texas ranks No. 87 in total defense and No. 91 in yards per play allowed in the nation.

Strong taking over defensive play-calling duties is the last card that he can play in order to salvage his job and this season at Texas. Either the defense stiffens up and makes some immediate strides against its arch-rival in the Red River Showdown this upcoming weekend or Strong’s fate is likely sealed. If there is a sign of optimism for Strong, a victory over Oklahoma last year took him off the hot seat, but that may have turned out to postpone the inevitable. Even if Strong beats Oklahoma, he would still be two games under .500 in two and a half seasons in charge of the Longhorns. That record simply isn’t good enough.

The only question seems to be if the Texas administration would wait until the end of the season or go the route of multiple schools already this season and fire its head coach in the middle of the season.