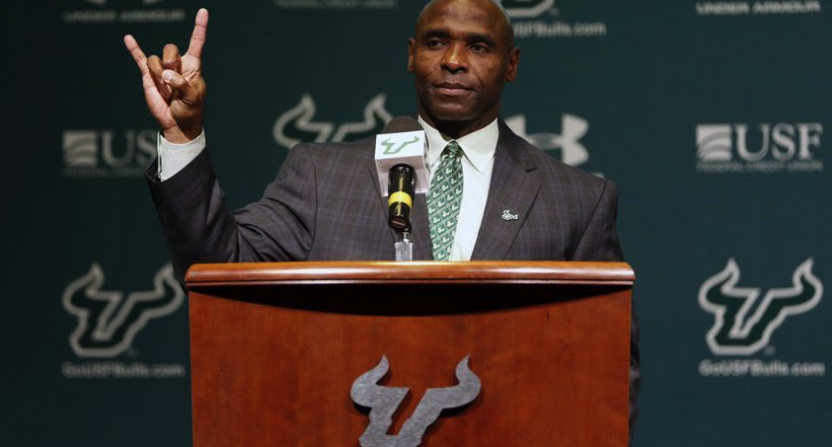 On Wednesday morning in Tampa, Florida, USF defensive end Ladarrius Jackson appeared in court after he was arrested on Monday. Jackson, 22, was charged with sexual battery and false imprisonment. Jackson has since been removed from team activity, but that didn’t stop Strong from getting an earful from the judge hearing the case.

According to to WTSP, during Jackson’s court appearance, Judge Margaret Taylor took the opportunity to blast Strong for the arrests of his players. While one could argue Strong didn’t recruit these players and may not be an advocate for their personalities, they are still his responsibility.

Judge attempts to "send a message" to Charlie Strong and asks if he has control over football players after recent arrests.

The judge also went after Jackson.

“I graduated from USF, I’m an alumni, graduated from USF in 1989, long before there was a football team,” Taylor said to Jackson.  “And while USF may not be the top-ranked school in the nation, I was never ashamed of being an alum until now.

“Embarrassed and ashamed, Mr. Jackson. Let’s just say that my USF diploma is not proudly hanging in my office right now.

Ouch…I would not want to be in her court room.

The defensive end is the second USF player to be arrested in the last two months. Back in March, defensive back Hassan Childs was charged with aggravated assault and possession of marijuana. Strong subsequently kicked him off the team.

Here are more of the judge’s quotes directed towards Strong, transcribed for your reading pleasure:

“I would implore you to think long and hard about whether being head coach at USF is a good fit for you before any other members of this community have to suffer at the hands of one of your players.

“Mr. Jackson, again assuming the facts surrounding your charges are true, your behavior is reprehensible.”