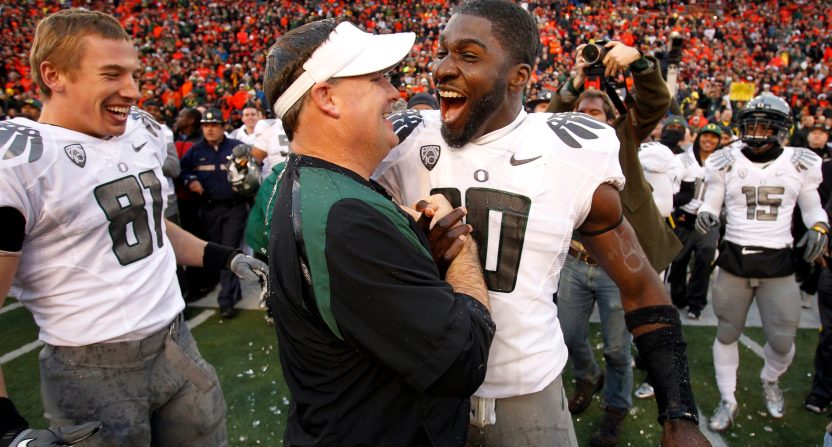 The Oregon Ducks find themselves in need of a new head coach now that Mario Cristobal all but appears to have taken the Miami Hurricanes job.

SOURCES: Oregon’s Mario Cristobal did a players-only meeting to tell them that he’s leaving to become the new head coach at Miami. Most of his staff is on the road and learned of it after. AD Rob Mullens has scheduled a staff meeting for 9 AM: https://t.co/NMexj5sY90

As far as what Oregon does next, a lot of people in the college football world immediately turned their attention to the best head coach in Oregon football history, who also happens to be right there in the Pac-12, too.

And while there are no official reports that Kelly would leave UCLA to return to Oregon, where he oversaw a 46-7 run in four seasons that included two Rose Bowls, a Fiesta Bowl, and a National Championship Game appearance, a lot of people seem to be thinking it makes too much sense for it not to happen.

If Mario Cristobal leaves Oregon for Miami… I expect UCLA coach Chip Kelly to be a target for Ducks.

the first domino in chip kelly to oregon has fallen https://t.co/V3RNgZUHpp

While Kelly’s run at Oregon was absolutely dominating, things have been a little less thrilling since. He found some success in his first two seasons as head coach of the Philadelphia Eagles but things regressed in his third season and he was fired. Kelly was then the head coach of the San Francisco 49ers for one year, a dreadful 2-14 finish. Following a very rough start, Kelly has resurrected his coaching career with the UCLA Bruins, where he’s got the school back on track this year, going 8-4 and headed to the Holiday Bowl.

If Oregon re-hired Kelly now, would they be getting the Kelly of old? Hard to say, but clearly, he’s still got fuel in the tank. And if the Ducks don’t pursue him, it’s hard to know who the right person might be for the job.