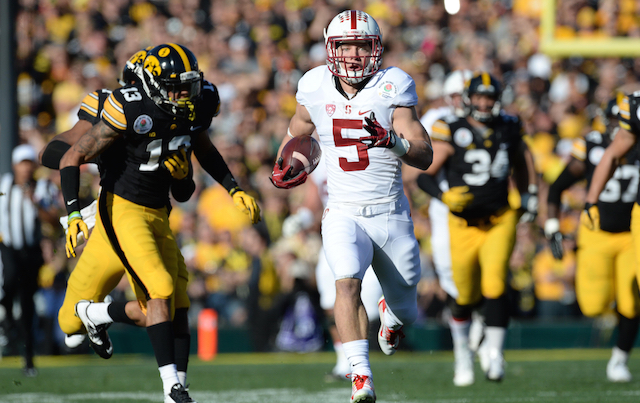 Another mid-tier bowl game will be without one of its star attractions. Stanford running back Christian McCaffrey has announced, via Twitter, he will sit out of Stanford’s appearance in the Sun Bowl in order to get on the fast track with his preparation for the NFL Draft.

McCaffrey is the second high-profile running back to announce he will skip the bowl season, joining LSU’s Leonard Fournette. Fournette previously decided to sit out of LSU’s Citrus Bowl matchup with Louisville. Both running backs have battled through various injury concerns this season, thus taking them from being preseason Heisman favorites to not even getting an invite to New York to watch Lamar Jackson give his acceptance speech.

Running backs tend to have a relatively short lifespan in the NFL, so McCaffrey and Fournette declaring for the NFL early was not a shock. Choosing to sit out of the bowl games to focus on NFL Draft prep is not exactly surprising either, especially as the draft logic evolves. The injury to Notre Dame linebacker Jaylon Smith last bowl season is most certainly causing a shift in how top-rated draft prospects focus on their future.

Smith won the Butkus Award as the nation’s top linebacker but tore his ACL and LCL in the first quarter of the Fiesta Bowl against Ohio State. Soon after undergoing surgery to repair his knee, Smith announced he was turning pro and declaring for the NFL Draft that spring. The Dallas Cowboys took a chance on him in the second round, even though he ended up having to miss the entire 2016 season.

For a few years now, the suggestion that potential high draft picks should just sit out their potentially final season of college football to focus on training or the NFL has ramped up to some degree. Is this the first crack in the system that will eventually lead to players going from sitting out meaningless bowl games to entire seasons? Probably not, although it is bound to happen someday. Of course, it is highly unlikely McCaffrey and Fournette would be sitting out if their postseason game really did mean anything. For example, you don’t see Clemson quarterback Deshaun Watson or Alabama defensive lineman Jonathan Allen choosing to sit out of the College Football Playoff, right?

This decision by McCaffrey and Fournette just strengthens the argument that bowl games like the Sun Bowl and Citrus Bowl may be nice, but they really are pretty pointless in the grand scheme of things.

Key players voluntarily choosing to sit out of mid-tier bowl games at best to focus on their NFL future is going to become the new norm, and there is nothing that can be done to prevent it. It makes sense, given these players are not paid to play in college. It is especially true for running backs, who can seriously hurt their knees and ruin their pro potential in a bowl game (see Willis McGahee, although he was injured playing for the national championship). In the end, nobody is really being hurt by these business decisions other than the bowl game itself.

Now, the Sun Bowl will have a game between Stanford and North Carolina, which should still be interesting to watch, but McCaffrey would have been the biggest reason to watch. Now? It’s the Mitch Trubisky show, I guess.