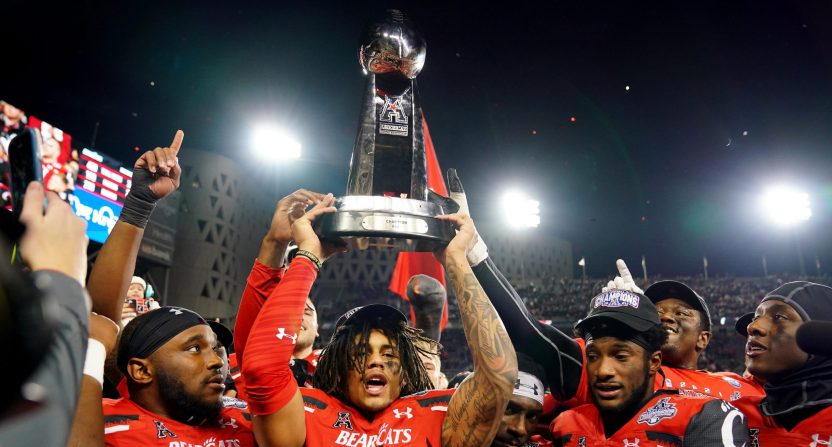 After a wild Saturday that saw Alabama take down previously unbeaten Georgia for another SEC crown, Utah top Oregon for the Pac-12 title, and Baylor upend Oklahoma State to win the Big 12, the College Football Playoff teams have been revealed. While the seeding might be a little different than what we expected to see last week, it’s essentially the four teams most people expected to see.

For all the pushback they received this season, the Alabama Crimson Tide still end up entering the CFP as the No. 1 seed. Just below them are the Michigan Wolverines, who have reasserted themselves into the national spotlight. The Georgia Bulldogs are now the No. 3 seed following their first loss of the year. And the undefeated Cincinnati Bearcats have entered the CFP as the No. 4 seed.

Alabama will face Cincinnati on New Year’s Eve in the Cotton Bowl, and Michigan will face Georgia in the Capital One Orange Bowl. The winners of those games will then play on Jan. 10 in the national championship game in Indianapolis.

Cincinnati became the second team in AAC history to finish their season 13-0 and the first Group of Five school to make the College Football Playoff since it was introduced in 2015.

There was certainly a lot of discussions leading up to the playoff about whether not Cincy deserved the spot over a P5 school like Notre Dame, Oklahoma State, Ohio State, or Baylor, but at the end of the day, the Bearcats did everything they were supposed to do and got a little luck from seeing their biggest threat to the No. 4 seed, OK State, lose this weekend.

When the news came down that the Bearcats were in the field, there were a lot of strong thoughts about it on Twitter from the college football world.

For the first time ever, a G5 team is officially in the College Football Playoff. Congratulations Cincinnati!!

Cincinnati made it! Anyone who acts like there was not a persistent lockout attempt until now is being disingenuous

Cincinnati establishing the blueprint for G5 teams to get in:

1. Win all your games
2. Predict (perhaps years in advance) which team will be No. 5, then schedule that team and beat them.

I think last year’s decision to put in Notre Dame after they lost by 24 to another playoff team over undefeated Cincinnati is the worst the Playoff committee has ever made.
this year Cincinnati got to play Notre Dame, won, and they’ll be last in and ND will be first out. Poetic

Cincinnati making the College Football Playoff is such a big moment for this sports town. The Reds won the World Series in 1990. But there’s a whole generation of Cincinnati sports fans that finally get to see their team play for a championship for the first time in their life.

It’s a huge day for college football and, specificially, for Cincinnati fans and other AAC, MWC, MAC, and CUSA fans who dream of seeing their team in the College Football Playoff one day. It takes a lot of things to go your way, as the Bearcats showed, but it’s possible.