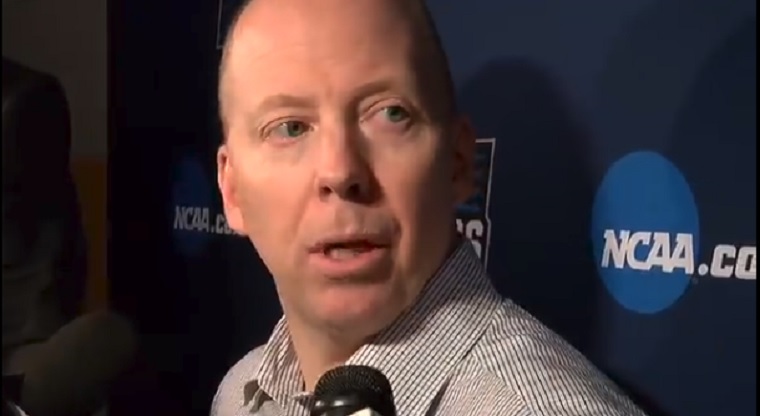 Cincinnati was hardly the only top seed that was shockingly eliminated from the NCAA Tournament on Sunday. The Bearcats can get in line with cross-town rival Xavier (a No. 1 seed in the West region), Michigan State and defending champion North Carolina, all of whom suffered upset losses. Those teams need to line up behind Virginia, however, which provided history as the very first No. 1 seed in the history of the NCAA Men’s Tournament to lose to a No. 16 seed on Friday.

But Cincinnati coach Mick Cronin was the one who got a bit testy with the media after his team’s unexpected loss. As The Comeback’s Michael Grant wrote following the Bearcats’ first-round win over Georgia State on Friday, Cronin is one of six coaches to take his team to the NCAA Tournament in each of the past eight years. Unfortunately, he’s the only one of that group who hasn’t coached his team to the Final Four during that stretch. (For that matter, he hasn’t advanced to the Elite Eight.)

Naturally, Cincinnati’s failure to advance to the Sweet 16 was a topic of discussion for reporters after Sunday’s surprising loss to Nevada. Adding just a bit more sting to the defeat is that the Bearcats’ squandered a 22-point lead to the Wolf Pack, which closed out the game with a 32-8 run. Initially, Cronin was defiant, saying not getting to the Sweet 16 didn’t bother him, also attempting to add perspective by mentioning real-life concerns that are on his mind off the court these days.

Mick Cronin asked about coming up short of a Sweet 16. “Doesn’t matter to me. You care about the Sweet 16, I don’t. I care about winning a national championship.” pic.twitter.com/nmsK2ydtJR

But when Jeremy Rauch from Cincinnati’s FOX19 followed up, reminding Cronin that big things were expected from this year’s Bearcats team — probably the best he’s had in his 12 seasons coaching the Bearcats — that touched a nerve.

“Like you said that wasn’t the goal. The goal was the championship,” Rauch said. “How disappointing was it for you, how hard is it for you to walk away when you know that you didn’t get that this year?”

Unhappy Mick Cronin when I asked if a loss like this would keep him awake at night:

“You come up with that question by yourself? You kidding me?” #Bearcats @fox19 pic.twitter.com/LGoQQUSty8

“I didn’t go to sleep yet. Did you come up with that question by yourself?” said Cronin. “Call me tomorrow. I’ll tell you if it keeps me awake at night. I answered the question. You asked if it kept me awake. I hadn’t been asleep yet. Come on, man. You kidding me?”

Some might point out that Cronin is exactly right. He can’t say whether or not the loss to Nevada made it difficult for him to sleep because he hadn’t tried at that point. But Rauch’s question was looking at the bigger picture and Cronin’s failure to advance as far as expected in the NCAA Tournament. After Friday’s game, Cronin told reporters (as quoted by Michael Grant) that the goal was to win the tournament, not get to a certain stage or milestone.

“We don’t worry about what other people might say our goals are,” Cronin said. “We’re just trying to win today, and we don’t believe in entering a tournament to get to the second round or the fourth round. If you’re in the tournament, you’re trying to win the tournament. That might be the Tiger Woods in me. I don’t believe in Elite Eights and all that stuff. If we win three more in a row, I won’t be celebrating.”

Obviously, Cronin’s not going to be celebrating now. (He said such occasions should be saved for the end of the year and team banquets.) Though he maintains he wouldn’t have celebrated had the Bearcats reached the Final Four, we won’t know if that would’ve occurred. Not during this season, anyway.

Understandably, to be continually reminded of that after a tough loss is grating and Cronin let that show. It was just one question too much for him. But it is worth noting how Cronin acted in comparison to Virginia coach Tony Bennett, who carried the weight of a historic, embarrassing loss on Friday and earned praise for how gracefully he handled himself afterwards. Many, including Cronin, would likely say these are different teams, different situations and each coach handles that in his or her own way.

Cronin surely doesn’t care, but it’s a bad look to be snippy and irritable after his team didn’t live up to expectations once again.