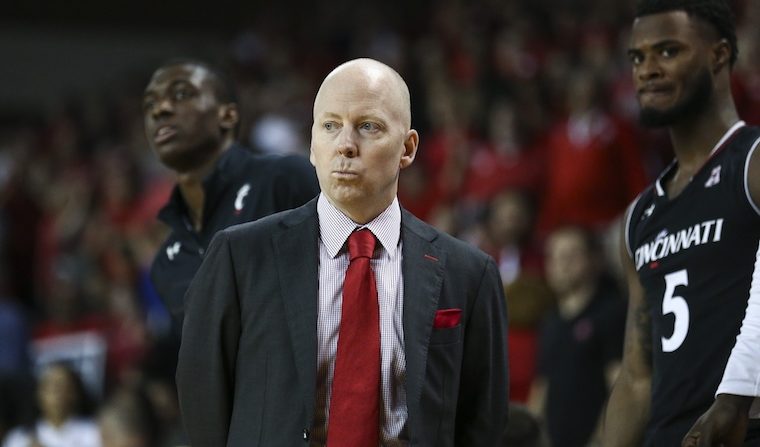 Nashville, Tennessee has always held a special place in Mick Cronin’s heart. When he started his head coaching career, he guided Murray State to a pair of Ohio Valley Conference tournament championships (2004, 2006) by winning in Nashville. The pressure was different then, but still stressful. Getting to the NCAA Tournament was the goal at Murray State.

Cronin’s mid-major success led to his current occupation, coach of Cincinnati. It has been a long and sometimes difficult job to move the Bearcats past the Bob Huggins era. The conference shuffle from the powerhouse Big East to the merely OK American Athletic Conference hasn’t helped.

Now Cronin has the Bearcats on the precipice of greatness. This Cincinnati team represents the team’s best shot to reach the Final Four in decades. The No. 2-seeded Bearcats (31-4) took a step forward with Friday’s 68-53 victory over No. 15 Georgia State. They didn’t play their best, trailing 16-7, but dominated most of the second half to advance to the second round of the NCAA Tournament.

Cincinnati has a proud basketball tradition. The program also hasn’t reached the Elite Eight since 1996 and hasn’t been a Final Four participant since 1992. The Bearcats are two more victories away from the former and three from the latter.

“We don’t worry about what other people might say our goals are,” Cronin said. “We’re just trying to win today, and we don’t believe in entering a tournament to get to the second round or the fourth round. If you’re in the tournament, you’re trying to win the tournament. That might be the Tiger Woods in me. I don’t believe in Elite Eights and all that stuff. If we win three more in a row, I won’t be celebrating.”

This has been a landmark year. Cincinnati won the regular season – its first outright conference title since 2002 – and tournament championship of the AAC. Still, Cincinnati might not be the best basketball program in its own city.

But Cronin has bigger goals.

“I do things differently than other people,” he said. “We’ve already had a great season. No matter what happens, we’ve had an unbelievable season. We’re in a tournament right now. There’s five games left to win it. And I think that’s always been my mindset, no matter what our seed has been.”

Friday was a bad day for the AAC. No. 4 Wichita State was stunned by No. 13 Marshall. Imagine how apoplectic conference commissioner Michael Aresco would have been if Cincinnati stumbled. For a while, it looked like the Bearcats might be in trouble. Georgia State guard D’Marcus Simonds, the Sun Belt Conference player of the year and an NBA prospect, outscored Cincinnati by himself, 16-7, to start the game.

“He played with a chip on his shoulder, made tough shots,” Bearcats forward Kyle Washington said. “The whole team played extremely hard. We have to commend them for that. We’re just happy to get out of here with a win.”

When all else fails, Cincinnati relies on its defense. The Bearcats are second in the nation in Ken Pomeroy’s defensive efficiency ratings. Only top overall seed Virginia was better. That defense began to wear on Georgia State. Simonds scored 16 points in the game’s first seven minutes. He tallied eight the rest of the game.

The Bearcats smothered (39.6 percent shooting) and out-muscled (20 offensive rebounds and 24 second-chance points) their way to victory. Bigger, stronger, more athletic has been the description of the Bearcats since the Huggins Days. Cronin, a Huggins disciple, continues to preach the same formula.

Huggins got the Bearcats to the 1992 Final Four and might have won the 2000 national championship, if not for Kenyon Martin breaking his leg. He was a controversial figure, but mostly beloved in Cincinnati until his ouster in 2005.

The man who succeeded Huggins seems to still be fighting for respect.

There are only six coaches to take their teams to the NCAA Tournament in each of the past eight years: Mark Few (Gonzaga), Tom Izzo (Michigan State), Roy Williams (North Carolina), Bill Self (Kansas) and Mike Krzyzewski (Duke). The sixth? It’s Cronin. He is the only member in that group who hasn’t taken his school to the Final Four.

Therein lies the rub. It’s hard to be called an elite coach if you’ve never even made the Elite Eight. But there are signs that Cronin is gaining appreciation.

The Sporting News named Cronin its national coach of the year. Also, he has done something Huggins never did, winning 30 games in back-to-back seasons. One more victory and the Bearcats will return to the Sweet 16 for the first time since 2012 when it started its NCAA journey in Nashville.

These are things worth celebrating. But Cronin doesn’t have time for that now.