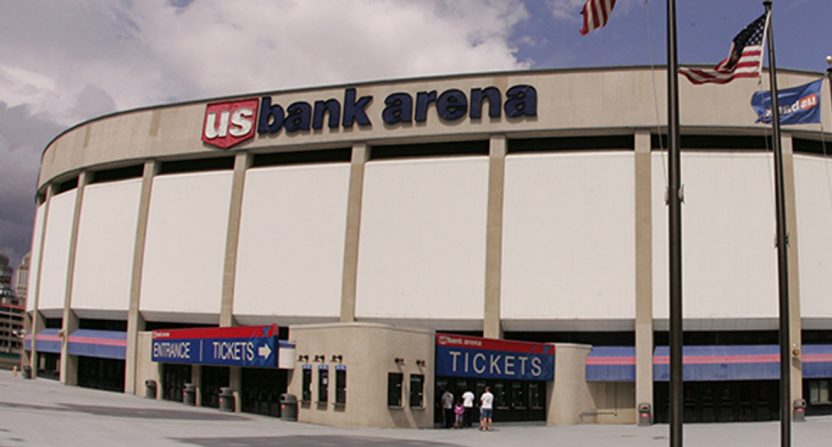 Cincinnati successfully bid to host first- and second-round games for the 2022 NCAA Tournament at US Bank Arena with the condition that the arena’s owners, Nederlander Entertainment, promised to upgrade the stadium by that time.

The NCAA’s required upgrades? Better locker rooms and an expanded media space, according to the Cincinnati Business Courier.

However, Nederlander Entertainment says that the upgrades will cost a whopping $350 million, and will need to be done with public money.

The bid for the tournament is contingent on Cincinnati and Hamilton County taxpayers coming up with at least some of the money for a reconstruction of 40-year-old U.S. Bank Arena, which could cost as much as $350 million. How much public money isn’t clear, since the arena’s owners haven’t said what they’re willing to invest and how much help they’d need.

Taxpayers funding $350 million for locker room upgrades and expanded media space? Well, if that seems like an impossible number, that’s because it is. The owners want an entirely new arena, and they want Cincinnati taxpayers to be on the hook for it.

A part-owner of U.S. Bank Arena said Wednesday that the current plan to prepare for the 2022 NCAA men’s basketball championship includes tearing down the arena and building a new, larger arena in its place.

Have we ever told you that publicly-funded stadiums are a bad idea? Well, they’re a bad idea. They’re pitched as economic boons to the community, but that’s almost never the case. Real economists almost unanimously say they’re a bad idea. One of the biggest proponents of them is a fake economist who was revealed to have doctored numbers.

Cincinnatians already know how bad of any idea this is, as they are currently on the hook for two stadiums, and according to Cincinnati.com, they’re not really looking for another one. Politicians from both parties agree.

“We already own two stadiums. We are full-up on stadiums,” said County Commissioner Chris Monzel, a Republican. “There’s got to be another way. To me, it rests with the owners and whether they want to make an investment.”

Commissioner Todd Portune, a Democrat, said his message to the arena’s owner, Nederlander Entertainment, has been consistent since the company first floated the idea of using some public money for a $200 million renovation in 2015.

“Go do it. It’s your arena,” Portune said Wednesday. “We’ll be happy to help with permits and zoning, but don’t think that the county has a pot of money over here that we’re waiting to make available.”

That last quote just about sums it up: “Go do it. It’s your arena.” Taxpayers shouldn’t be expected to pay for an arena that’s used to enrich a corporation. That’s especially true when the corporation is trying to trick the public into thinking a full-scale rebuilding project is needed to bring the NCAA Tournament to Cincinnati, when the NCAA only requested a few minor changes.