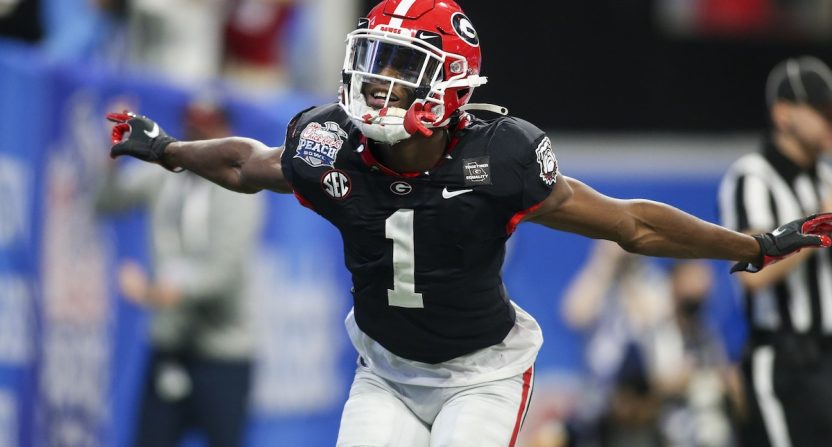 For 59 minutes and 57 seconds of the 2021 Peach Bowl, the University of Cincinnati football team made a strong argument for being considered one of the four best teams in the country to the College Football Playoff selection committee, fans, and media.

But Georgia’s Jack Podlesny kicked a 53-yard field goal to give the Bulldogs a 22-21 lead with three seconds remaining. And Cincinnati’s undefeated season ended with quarterback Desmond Ridder being sacked for a safety and a 24-21 loss.

The Bearcats beating a top SEC team like Georgia would’ve made a powerful statement for Group of 5 programs excluded from College Football Playoff competition in favor of more acclaimed Power 5 schools. Representing the American Athletic Conference, Cincinnati appeared poised to do just that, building a 21-10 lead after a 74-yard touchdown by Jerome Ford early in the third quarter.

Cincinnati taking out frustration from being kept out of the College Football Playoff on Georgia. Jerome Ford goes 74 yards for the score 🚀 pic.twitter.com/zQyyRFMvAs

Cincinnati took a 14-10 lead into halftime after an 11-yard touchdown pass from Desmond Ridder to tight end Josh Whyle. But an unsportsmanlike conduct penalty committed by offensive lineman James Hudson two plays before that score turned out to be costly for the Bearcats.

The junior left tackle was flagged for hitting Georgia’s Tyson Campbell while he was out of bounds, but officials also perceived Hudson leading with his helmet and penalized him for targeting. As a result, he was ejected from the game.

Cincinnati's James Hudson overzealous with his downfield blocking. The Bearcats still scored a touchdown, however, and lead Georgia at halftime, 14-10 🐾 pic.twitter.com/hOjfFdGnh4

Losing Hudson turned out to be significant for Cincinnati as the Georgia defense overmatched reserve tackle Lorenz Metz. The sophomore tackle committed two costly false start penalties and was beaten for key sacks that killed offensive drives in the fourth quarter while the Bulldogs rallied to within two points. (Georgia notched a season-high seven sacks for the game.)

Georgia’s game-winning drive took seven plays, highlighted by a 15-yard pass from JT Daniels to George Pickens (who finished with seven catches for 135 yards and a touchdown). The Bulldogs couldn’t get any closer than the Cincinnati 36-yard line after two incompletions. But that was still close enough for Podlesny to kick the go-ahead field goal.

Cincinnati finishes with an excellent 9-1 record (6-0 in the AAC) for the 2020-21 season. But going undefeated would’ve been especially impressive and helped make a case for a Group of 5 program to warrant more consideration for the College Football Playoff.

Unfortunately, losing to a Power 5 school — and an SEC team (Georgia finishes 8-2) — probably helps the selection committee feel like they made the right choice.