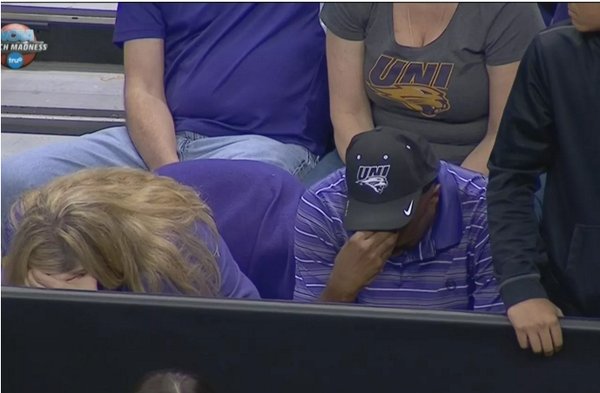 The Northern Iowa Panthers saw both sides of life in the 2016 NCAA Tournament.

Friday night against Texas, they won on a halfcourt bank shot at the buzzer.

Sunday evening against Texas A&M, they suffered one of the most unforgettable meltdowns in NCAA tournament history.

Friday night, UNI advanced to the round of 32. 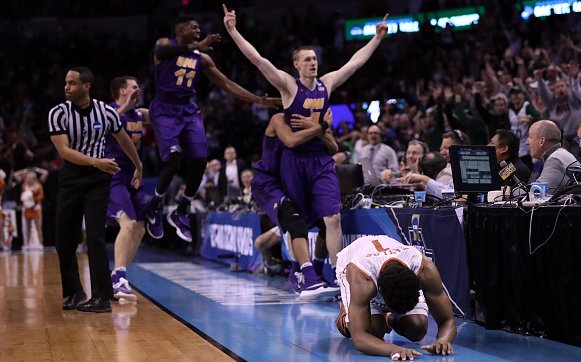 Sunday evening, the Panthers — who most famously advanced to the Sweet 16 on Ali Farokhmanesh’s three-pointer against Kansas six years ago — were denied re-entry to college basketball’s second weekend. Texas A&M will face Oklahoma in the West Regional semifinals in Anaheim.

Friday. Sunday. Two polarities cannot be more distinct for Northern Iowa — in terms of the severity of plot twists involved, or the depth of feeling at each end of life’s spectrum.

Friday, the Panthers kissed in some onions from long distance, and earned this remarkable distinction on the sunny side of the street:

The Panthers carried the good energy from that game into Sunday’s contest in Oklahoma City against Texas A&M. They were rattled by an 11-0 A&M run early in the second half, but they answered that push with a 13-6 burst of their own. They established a 54-42 lead with 7:20 left, and while A&M got as close as six in the next several minutes, Northern Iowa fended off every subsequent attempt at a rally by the No. 3 seed. The 11th-seeded Panthers built their lead in the final minutes, as A&M’s season slowly slipped away…

Northern Iowa was up 69-57 with 34 seconds left and now they're in overtime. Four turnovers in 34 seconds does not seem possible.

What happened to the Panthers in those next 34 seconds was a parade of pure paralysis, several split-second decisions that all went wrong.

A brief explanation will not only describe the final half-minute, but especially the final play of regulation which gave Texas A&M its portal to one of the all-time great NCAA tournament escapes.

UNI’s central failure in the final 34 seconds — more specifically, the final 25 seconds, in which the Panthers had no timeouts — could be partially attributed to the loss of guard Matt Bohannon, who was injured just before that chaotic half-minute began. The Panthers lacked an extra ball-handler who might not have been able to break A&M’s pressure, but certainly would have made sound decisions with the ball. It is this latter aspect of ball control which UNI neglected, ultimately leading to the Panthers’ downfall in double overtime.

Twice in the final minute, as you’ll see in the video below, UNI players tried to spike the ball off an A&M player’s leg and out of bounds. Naturally, missing was not hoped for, but the bigger issue is that a miss enabled A&M to immediately collect the ball and put it in. If UNI was going to throw the ball away — some live-ball turnovers are better than others — chucking the ball to the other end of the court would have at least had the effect of making the Aggies work for points.

Here’s the video of the end of regulation, as Northern Iowa’s lead melted away, one turnover at a time:

One note about the last turnover which led to A&M’s tying (saving) basket with under two seconds left: In the backcourt, there is no 5-second count once a player picks up his dribble. The only count the officials use is the 10-second count to cross halfcourt. UNI’s Wes Washpun could have held that ball for 10 seconds. It would have been a turnover, but A&M would have had under two seconds left. UNI inbounded the ball with just under 12 seconds left. A&M didn’t foul — smart? Not really. The Aggies risked 10 seconds draining from the clock. Moreover, Washpun — had he chosen to give up the ball — could have turned around and launched the ball down the court. A 50-foot fling would have forced A&M to resort to the same desperation heave UNI needed to beat Texas on Friday.

Nope. Washpun gave up the ball, and he gave it up in such a way that A&M scored quickly.

Here’s how the first overtime unfolded. There was no collapse this time — A&M’s Danuel House and Alex Caruso simply hit money shots in the last minute, while UNI missed one free throw:

The rally, part 2… in overtime.

In double overtime, a sense of anticlimax entered the building in Oklahoma City. Washpun fouled out in the first overtime, forcing the limited Bohannon to re-enter the game. Northern Iowa didn’t lose faith — it lost its legs. A&M was fresher. The Aggies were quicker to loose balls, and they didn’t allow a single made field goal by the Panthers. With A&M leading by four in the final seconds, a Northern Iowa jumper fell multiple feet short of the basket, a reflection of the extent to which the Panthers had been worn down by attrition.

Even Harry Houdini has to admit that he never escaped a situation as dire as the one Texas A&M eluded on Sunday in the NCAA tournament.