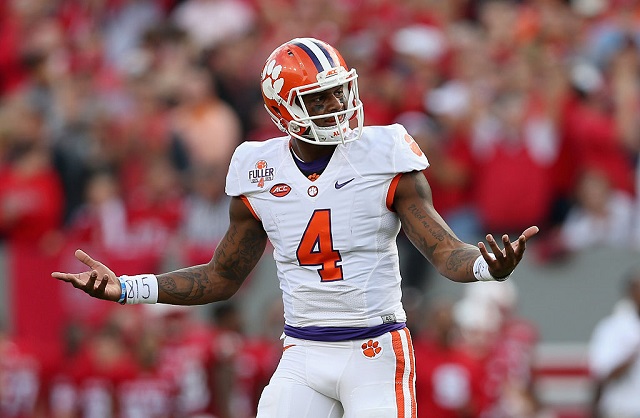 The College Football Playoff has been an interesting experiment in its early history so far. However, Tuesday’s latest rankings saw no movement among the top four teams, which apparently gives us a clear path to the CFB Playoff on New Year’s Eve.

Or is it all that clear?

Lots and lots of chaos.

About the only thing that FiveThirtyEight is certain of is that Oklahoma is in and the winner of the Big Ten championship game between Iowa and Michigan State is in as well.

So where does the possible chaos come from? Specifically speaking, should Clemson and/or Alabama lose, it could throw everything we all thought we knew about the College Football Playoff into complete chaos.

Would a 12-1 Clemson squad be good enough to keep a place in the playoff? What about Ohio State or Stanford? Or that North Carolina team that just beat Clemson?

Ohio State’s odds of getting in as the second Big Ten team have been steadily declining, according to the site, and currently sit at just 16 percent (down from 22 percent the week before). However, there is Stanford right below the Buckeyes in the standings and a win by the Cardinal over USC in the Pac-12 title game once again throws a monkey wrench in to how to analyze and mathematically prove who gets in.

FiveThirtyEight also points out how difficult it would be to prove and come up with the math of what would happen to UNC should it beat the No. 1 team in the country at this point. The Tar Heels come in to this weekend at No. 10 in the College Football Playoff rankings, but knocking off the only undefeated team in major college football could be earth-shattering.

Will it be enough to launch UNC six spots upward given its 11-1 record and weak schedule this season?

The scenarios are endless and even math like FiveThirtyEight is so good with seems unable to predict with any measure of certainty exactly what will happen.

For some, that is the beauty of it all — the human factor and the anticipation, chatter and discussion created by the sport and its rankings during the season. Controversy creates eyeballs, compelling people to tune in for the weekly announcement shows and the final College Football Playoff pairings.

Will chaos reign in the College Football Playoff or will Alabama and Clemson hold serve and make all of this pointless?

Tune in Saturday to find out on the field, where it is supposed to matter most.