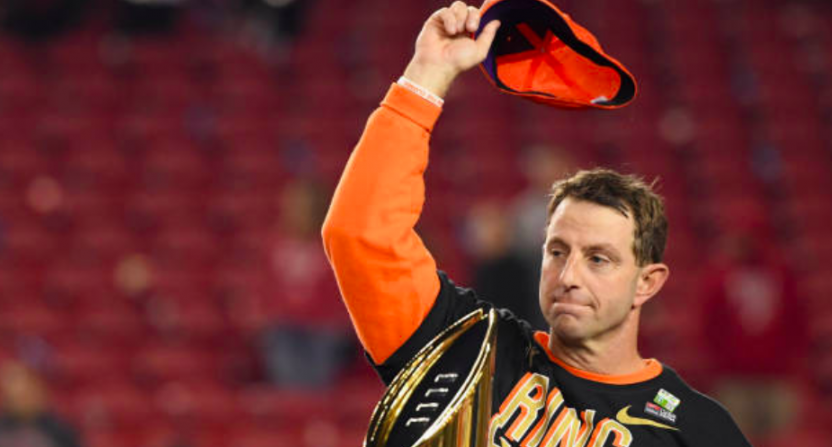 Nick Saban has lost 21 games in his illustrious, 12-year Alabama career. Six of those losses came in his opening season, back in 2007. That means that, over the last 11 years, Nick Saban has lost just 11 games. Most college football fans can recall those games, if not list them offhand. That’s how rare and noteworthy every loss by Saban has been. He lost back-to-back games to end the seasons in 2008 and 2013. Three losses in 2010 marks his worst season in Tuscaloosa. Johnny Manziel beat him, and Ole Miss knocked Saban off twice. None of those — not the kick-six, not the Utah beatdown, not the Johnny Football magic — came anywhere close to what Clemson did in the National Championship Game.

If we look at this game fairly, Clemson was not necessarily the better team. Alabama may have more talent, and that showed on the field. It’s the little things — all the little things — that added together and went almost entirely Clemson’s way. If this game was played again, it might be hard to pick Clemson. But the game is only played once, and the Tigers did absolutely everything right to lay the wood against Alabama.

The Tide defense started out strong, forcing a three-and-out on Clemson’s opening possession. It might feel weird to look back on the game and think that Alabama’s defense was strong, but it was. The Tide forced three three-and-outs, including on two of Clemson’s opening three drives. The Tigers got a huge pick-six on an errant throw by Tua Tagovailoa on Alabama’s first drive, but Tagovailoa responded with a deep touchdown pass three plays later. The Tigers responded with a three-play touchdown drive next, but they couldn’t stop Alabama, who marched down the field to cut the lead to 14-13 (Joseph Bulovas missed the extra point).

That last paragraph was the first quarter, and it was dominated by Alabama, scoreboard notwithstanding. The Tide controlled the time of possession and the line of scrimmage on both sides of the ball. A coverage bust set up Clemson’s offensive touchdown, and a pick-six was the other score. After forcing another three-and-out, Alabama took a 16-14 lead, and looked to be heading towards a record seventh National Championship for Nick Saban. Then, quite suddenly, everything flipped.

Maybe it was how Clemson held Alabama to that field goal (including a false start by Alabama from the one-yard line). Maybe it was the interception on the next drive. It could’ve been something said on the sidelines. We may never know, but the game absolutely turned on its head after that point. The Tigers went on a quick touchdown drive, and Alabama looked hard to stop on its ensuing drive. Tagovailoa made a poor throw, though — misreading the coverage — and threw an interception deep in Clemson territory. The Tigers responded with another touchdown, and had to settle for a field goal to end the first half with a 31-16 lead.

From that point onwards, the Alabama offense just couldn’t do anything. It moved the ball, certainly –the offensive line got good pushes, and the running game was stout — but Alabama just couldn’t put up points in the red zone. The Crimson Tide had three second-half drives penetrate inside the Clemson 25-yard line during the second half. Every single one of those drives ended in a turnover on downs, including a terrible fake field goal decision. Alabama was shut out in a half for the first and only time this year.

Clemson added two second-half touchdowns, including a long touchdown pass to Justyn Ross, who raced for 74 yards after the corner fell down in press coverage. The second touchdown came on a long drive, sustained by multiple tremendous catches by Ross, an Alabama native.

The most emphatic — and memorable — drive of the game was the final one. Clemson took over at its own one-yard line with 10:02 on the clock. The Tigers ran the ball down Alabama’s throat- something we’ve never seen anyone do. 14 runs (well, 13 runs and one screen pass) later, the Tigers still had the ball, and the game was over. Not only was Alabama beaten down on that final drive, but the Tide’s spirit was clearly broken. We’ve never before seen that from a Saban-coached team.

Trevor Lawrence is a true freshman, so he has at least two more years in college football (unless the NFL and NFLPA change their rules, because he could play in the NFL right now). The receiving corps returns mostly intact — Ross is also a freshman — as does a strong backfield. The offensive line loses a lot of experience, but there are some strong seniors coming up to replace them. The defense will have some work next year, but it also returns a lot of talent, and Brent Venables is the best coordinator in the country, hands down. As long as he’s still on the sideline next year, Clemson will have one of the best defenses in the country.

This loss hurts for Alabama and Saban. There’s no question about that. Saban has some upsides for next year, though. He returns Tagovailoa, along with the best receiving corps in college football. The Crimson Tide are also stacked with talent on both lines, as well as seemingly never-ending a stable of running backs. Alabama also has a relatively weak schedule next year- the “premier” nonconference opponent is Duke, and the Tide face South Carolina in cross-division SEC play.

The night belongs to Clemson, though. The Tigers dominated the big plays, and Swinney and Venables thoroughly out-coached Saban and his staff. If we’ve learned anything, it’s that Alabama will be back. Right now, though, it’s hard to see that. Dabo Swinney just handed Nick Saban the worst loss of his career, and he’s only getting started.