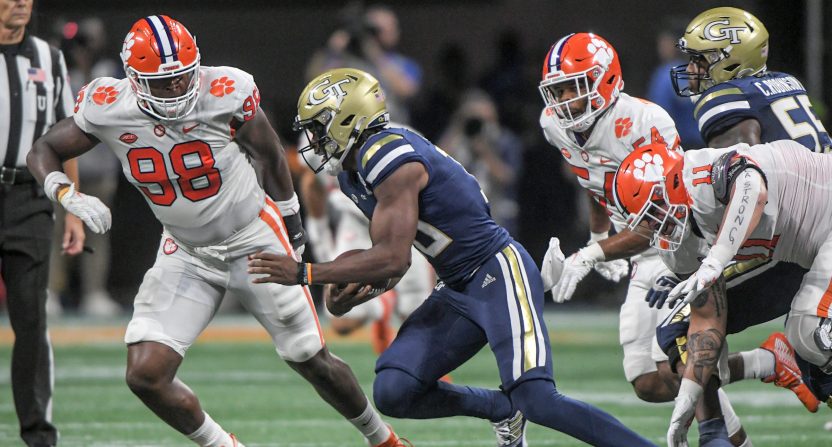 After reaching the College Football Playoff for six straight seasons, Clemson had a shockingly ordinary season in 2021, going 10-3. Monday night’s game against Georgia Tech was an opportunity for everyone to see if the Tigers are indeed ready to compete for another National Championship. The results were decidedly inconclusive.

On the positive side of things, Clemson won 41-10. But that final score may give an inaccurate view of how the Tigers played. For much of the game, Clemson seemed vulnerable to an upset. A touchdown moved the Yellow Jackets to within four in the third quarter. After that, though, the Tigers offense broke out of a prolonged slumber. Clemson answered Georgia Tech’s touchdown with a field goal. Then, on its next possession, Clemson was in the end zone and took a 24-10 lead.

DJ Uiagalelei puts Clemson back up by 14 with a 9-yard TD run! #ClemsonvsGT pic.twitter.com/I8i8AZbo2u

From there, it was all downhill, as Clemson cruised to a victory.

Offensively, the Tigers were not pretty. Quarterback DJ Uiagalelei was inconsistent. He finished the day 19-for-32 for 209 yards passing with one touchdown. He ran for 28 yards on 13 carries, with one passing and rushing touchdown. On the ground, the Tigers gained 127 yards on 40 carries.

Defensively, though, Clemson was dominant. The Tigers allowed only 237 total yards. Georgia Tech ran for just 73 yards on 30 attempts, or 2.4 yards per carry.

The performance of the Tigers left several observers commenting on the Dr. Jekyll and Mr. Hyde nature of the team.

Can you imagine how badly the Clemson DEF beats up this OL in 1s vs 1s?

look at the push clemson gets by the time the handoff happens lol. full yard in the backfield across the entire line. pic.twitter.com/cZ1E3iJ8LC

This Clemson defense is something else. All these dudes just fly around & swarm to the ball

Clemson’s defense is College Football Playoff-worthy, but their offense might be one of the worst in the entire country.

The offense has a long way to go. But as long as it doesn’t make too many big mistakes, the goal will be to just avoid mistakes that put the defense in a hole. Because if that defense stays healthy and is given a fair shot, it’s good enough to keep the Tigers in every game they play.