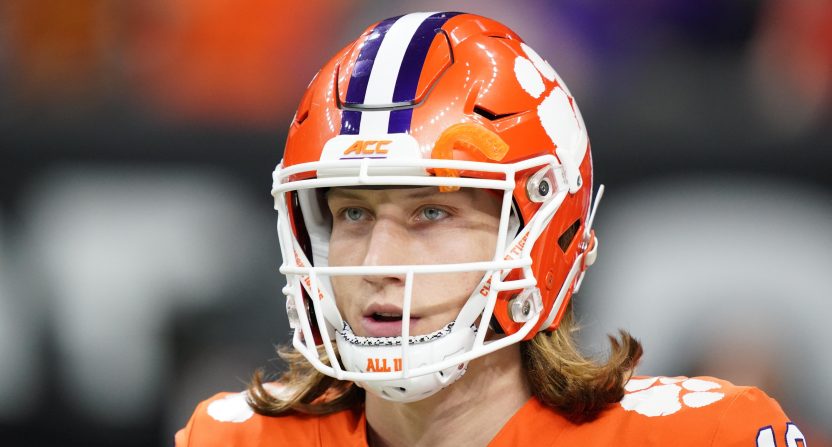 College football saw perhaps its most notable COVID-19 test result yet Thursday when the No. 1  Clemson Tigers announced that quarterback Trevor Lawrence (the presumed No. 1 pick in the 2021 NFL Draft) has tested positive for COVID-19. However, that announcement comes with some questions, as it didn’t specify when Lawrence tested positive. And while he’s certainly out for this week’s game against unranked Boston College, it’s unclear if he’ll be out for the Tigers’ game a week from Saturday against No. 4 Notre Dame:

Clemson coach Dabo Swinney confirms his starting QB Trevor Lawrence tested positive for COVID-19. Will miss Saturday's game. Uncertain is his status for the Nov. 7 game at Notre Dame. Depends on if he tested positive today (ineligible), or prior to today (eligible) pic.twitter.com/ZmQ9LgLKUC

As for this week, Lawrence’s positive test likely means that true freshman D.J. Uiagalelei will get the start against Boston College. Uiagalelei, the top QB recruit in the country this year, has completed 12 of 19 passes for 102 yards with two rushing touchdowns so far.

This also fits into the overall story of COVID-19 amongst the Tigers. As of July 10, there had been 53 positive tests in Clemson athletics, compromising 47 student-athletes and six staff members. As of June 26, there had been 37 positive tests amongst Clemson football players. That all came after head coach Dabo Swinney said in April he had no doubts their season would start on time, saying “We’re going to kick this thing right in the teeth.”

At any rate, it’s what’s going to happen with Lawrence for the Notre Dame game that’s perhaps most notable in terms of the story of the 2020 college football season. Yes, going from Lawrence (a likely Heisman Trophy candidate) to Uiagalelei is a drop-off, but there’s been no indication that Boston College can compete with Clemson regardless of who’s under center for the Tigers. But the No. 4 Fighting Irish certainly look like a more formidable opponent at this point in time. So we’ll see what the news is on that front.