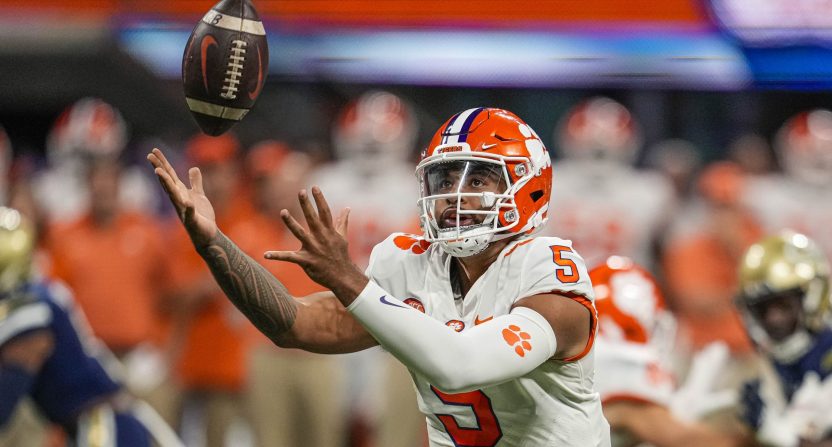 Although Clemson Tigers quarterback DJ Uiagalelei had an abysmal season last year, many expected the junior quarterback to take the next step forward in leading the Tigers back to the National Championship game.

During their season opener against Georgia Tech at Mercedes Benz Stadium Monday, the Tigers came in as the fourth-ranked team in the country with all the hype in the world.

However, Uiagalelei put a damper on some of those expectations, having about as poor of first half as you can have — throwing for only 108 yards and a touchdown.

Being the only game on TV during Labor Day, all eyes were on fixed on Monday’s game, with many calling out the Heisman hopeful’s weak showing against a rebuilding Yellow Jackets squad.

I don’t know who DJ Uiagalelei will play QB for next year, but it ain’t gonna be Clemson.

Find you someone as loyal to you, as Dabo Swinney is to DJ Uiagalelei

DJ Uiagalelei is the worst Clemson QB I've ever seen in my lifetime.

Is DJ Uiagalelei the worst Big Time Big Team QB of all time?

The rope for Uiagalelei maybe running out with Dabo Swinney having the option of bringing out highly touted five-star freshman Cade Klubnik to provide the offense with a spark.

The Samoan gunslinger showed signs of promise in 2020 after taking over for Trevor Lawrence who was sidelined with COVID. He even set a Clemson rookie record by throwing for 439 yards against Notre Dame.

Uiagalelei also finished the season with the fifth-best passing efficiency rating by a freshman in ACC history. However, that promise was soon squandered after he ranked 15th among ACC quarterbacks in that same category the following season. Keep in mind, there are only 14 teams in the conference.