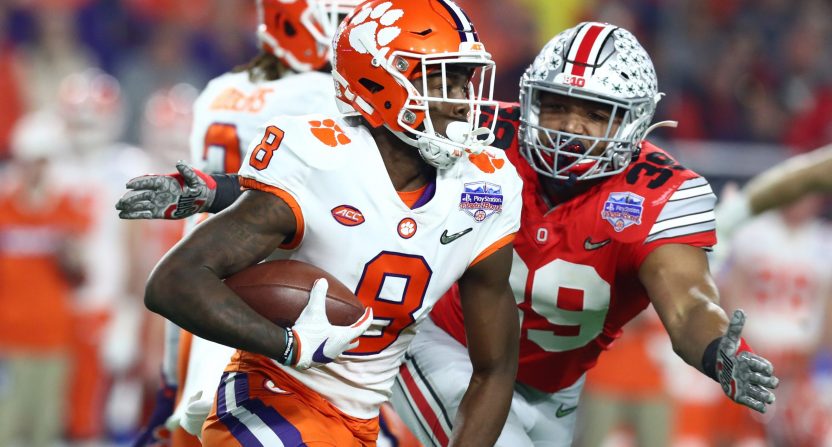 Clemson head football coach Dabo Swinney told reporters on Monday that wide receiver Justyn Ross will miss the 2020 college football season (if there is one). There were recent reports that Ross would need surgery to relieve what Swinney had referred to as “stinger symptoms,” but an X-ray showed that Ross was born with congenital fusion in his neck and spine.

Swinney told reporters that doctors are very concerned, and there’s no guarantee Ross will be able to play football again.

Breaking injury update from Clemson: Justyn Ross is going to have surgery Friday. When he had an X-ray after the spring injury, he learned he was born with something called congenital fusion. He will not play this season.

Dabo Swinney on WR Justyn Ross. Surgery scheduled for Friday. Ross has what Swinney called a "congenital fusion in his neck/spine. Doctors are very concerned.

Dabo Swinney just said Justyn Ross will not play this season. Said there's no guarantee he can play football again. Has a congenital fusion that he was born with. It showed up in an X-ray this spring. Will have surgery this Friday.

Ross has put together two terrific seasons for Clemson, with 1,000 yards receiving (21.7 AVG) and nine touchdowns as a freshman, followed by a 66/865/8 line as a sophomore.

While this situation will surely be treated with extreme caution, Swinney said there’s hope — if everything goes well — that Ross can return to football by January, and choose between returning to Clemson or entering the NFL Draft.

Swinney said the hope is Ross will be able to return to football and that in January he will choose to between the the NFL combine or a return to Clemson.

Hopefully Ross is indeed healthy enough to be able to make such a decision by then, but his long-term well-being should be the priority here.