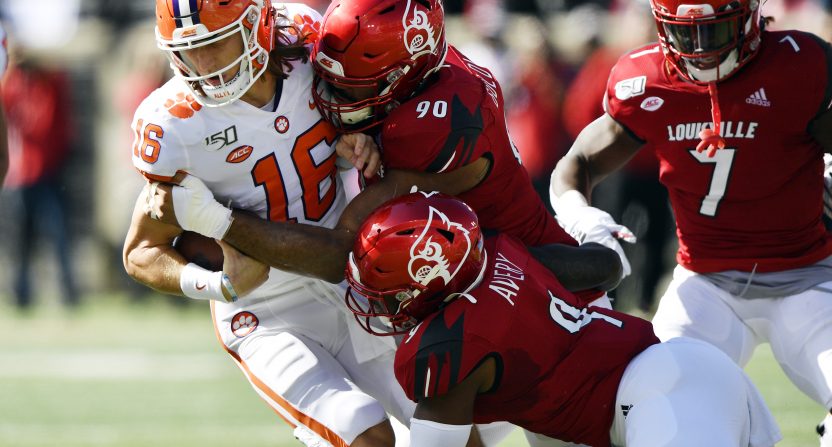 Last season, Clemson’s freshman phenom quarterback Trevor Lawrence put up some gaudy numbers en route to their national championship. He not only threw for 30 touchdowns and 3,280 yards but Lawrence also only threw four picks the entire season. It was the kind of stat line that had many people thinking the 2019 Heisman was his to lose.

Barely seven games into the 2019 season, it all but appears that he had lost it. Clemson is still undefeated and No. 2 in the nation (even if there is a lot of chatter about their strength of schedule), but Lawrence’s play has taken a dip, especially when it comes to accuracy and interceptions. While his completion percentage is just a few points off from last season, Lawrence already had six interceptions on the season (coupled with 11 touchdowns, which is nowhere near his previous pace as well).

As of yet, Dabo Swinney doesn’t seem too concerned about his quarterback and even seems to like that Trevor is dealing with adversity.

.@ClemsonFB Trevor Lawrence has already thrown more interceptions this season than he did all of last year but Dabo Swinney says, "I'm kind of glad he has had a little adversity. I think that's good for him. I guarantee he'll respond." #clemson pic.twitter.com/que1wyjkt1

Saturday, the Tigers took on the Louisville Cardinals in what was expected to be a typical ACC road contest that Clemson should have had no problem winning. They may still do that but, so far, Lawrence has made some major unforced errors that are calling into question just what is wrong with the sophomore.

Lawrence’s first pick of the day, which came as Clemson was attempting to score early, seemed to be thrown directly to the safety at the goal line.

The second one came as the first quarter was coming to a close. Again, it’s a shot at the endzone, and although it looks like Clemson’s receiver falls down, the ball was basically thrown into double-coverage and was about as dangerous a pass as you can throw.

With that, Lawrence now has eight interceptions, the most of any quarterback in the ACC.

It should be noted that, at least in terms of the regular season, Clemson may not need Lawrence to be in top shape. The ACC is a quagmire and if the rest of the team can hold their own while Trevor figures it out, they’ll be fine (unless someone else gives them a game like UNC). But if the Tigers want to be competitive in the College Football Playoff and defend their title, they’re going to need more out of their star QB.

To his credit, Lawrence did put together a touchdown drive in the second quarter, giving Clemson a 10-0 lead.

It’s now 10-3 Clemson with a few minutes left in the second half. If Louisville sticks around and makes this game, expect Lawrence’s interceptions to loom large over the discussion all week long.