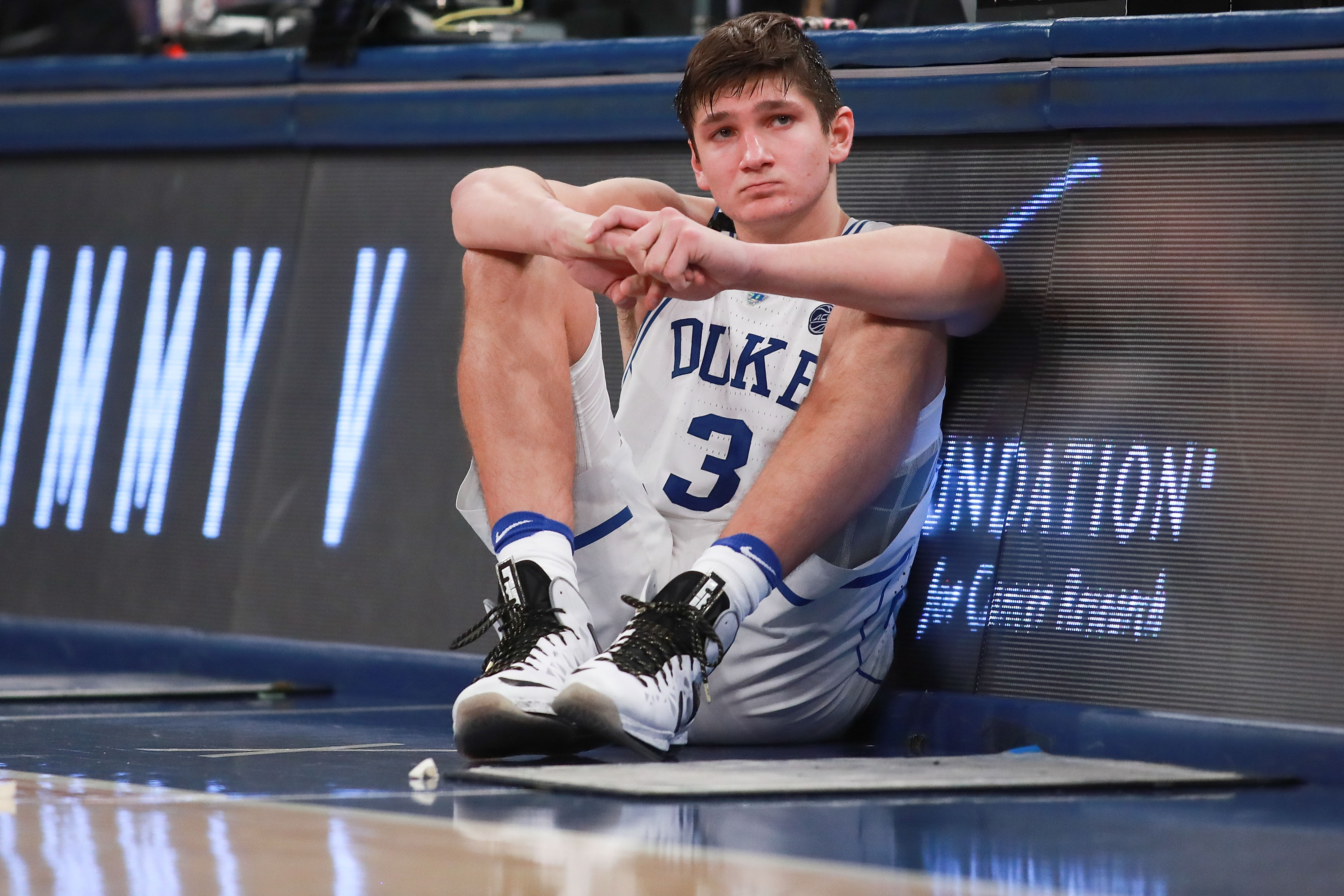 Grayson Allen has a problem: He trips opponents.

The Duke guard has been caught tripping opponents twice before, both last season. The first came against Louisville:

And then shortly after, near the very end of a game Duke was handily winning over Florida State:

Those are intentional acts, and dangerous acts at that. (Allen’s “who, me?” attitude in the aftermath of every incident only adds to the situation.) Despite the repeat offense, though, the ACC declined to suspend him, though they did issue a reprimand. At the time, Coach K didn’t seem too concerned, and essentially said that the only reason anyone cared about Allen’s behavior was due to the intense spotlight on the Duke program:

“We were proactive with that,” he said. “I called the ACC the morning after the game and told them that I had talked to (FSU coach) Leonard Hamilton. After I saw the thing, I brought Grayson in that night and talked to him. I told the ACC, this is what we’ve done, you tell us what to do. In his case, look, if anything was called, it would be a flagrant-1. And so, all this suspension thing and that, look – I would not suspend any player for what would be a flagrant-1. What he got was the stiffest reprimand a player has gotten in our conference this year. There have been other guys who have hit people and whatever, and no reprimand. I’m not knocking our conference. I’m just saying I thought they took action. And then you have to move on. The world doesn’t move on because it’s Duke. So we have to live with that. I thought we handled it the way we should. And we need to move on.”

That wasn’t good enough then. Notice he made no mention of Allen’s repeat offense. No mention of any internal discipline. No mention, really, of any sort of contrition. Instead, Coach K seemingly looks to deflect the blame outward.
In the build-up to this season, Allen went on a bit of a redemption tour. Here’s an excerpt from a lengthy piece by ESPN’s Dana O’Neil on Allen’s tripping incidents:

Now, with a new college basketball season around the corner, the Allens are waiting with trepidation to learn the statute of limitations on 2016 basketball crimes. When does last year’s viral video disappear?

Of course, she knows better. Sherry knows neither she nor anyone in her family gets to call a moratorium on the Grayson Allen tripping conversation. Her son now knows that, too. He understands he cannot undo what has already been done. He also knows some opinions of him will never change.

“I know there’s never completely a blank slate,” Grayson said. “That’s going to be replayed and not forgotten about. But for me, every opportunity I get to step on the court is an opportunity to play the game again and play the game the right way.”

That piece was published on October 25th. Allen didn’t even make it two months before once again tripping an opponent, this time in a non-conference game against Elon Wednesday.

Reading his lips there, he’s not remorseful. He’s in complete disagreement with the call. (He also once again reacts with the “who, me?” upturned palms.) Surely, of course, Duke head coach Mike Krzyzewski, renowned and revered and worshiped by fans and media alike for his commitment to doing things “the right way”, would see that discipline was in order.

Once again, no mention of his prior offenses. Once again, no real admission of anything, beyond his assumption that Grayson Allen deserves some sort of commendation merely for visiting with and apologizing to the offended party. Here’s something worth commending: all the other players in the sport who don’t trip opponents.

It looks as though any suspension of Allen at this point will have to come from the conference, and there are plenty of calls for action out there. Even from some of the most traditionally Duke-friendly places:

A suspension is a MUST by the @theACC Duke beats Elon Phoenix 72-61, but all eyes on Grayson Allen’s trip https://t.co/RwrtusT8Ue

Not to clutch any pearls, but what if Steven Santa Ana had landed awkwardly and sprained an ankle, or tore up a knee, or been injured at all? Sending an opponent to the floor via a trip isn’t that different from a shove.

But as with the other two identical incidents, Coach K seems to be content to let it slide. He didn’t even bench Allen for the remainder of the game. Krzyzewski seems to be daring the ACC to suspend Allen. It’s ridiculous behavior for a coach with Krzyzewski’s stature, and it’s just as arrogant as when he admonished Oregon’s Dillon Brooks after Duke’s NCAA Tournament loss last season, and then lied about it to the press.

Grayson Allen has cultivated his own reputation, and he’s living up to it. That’s on him, and he’ll have to suffer the consequences.

But Coach K has carefully crafted his own image for decades. He’s been given a few high-profile chances in 2016 to prove that he really is all that he’s made out to be.

And he’s come up short every time.