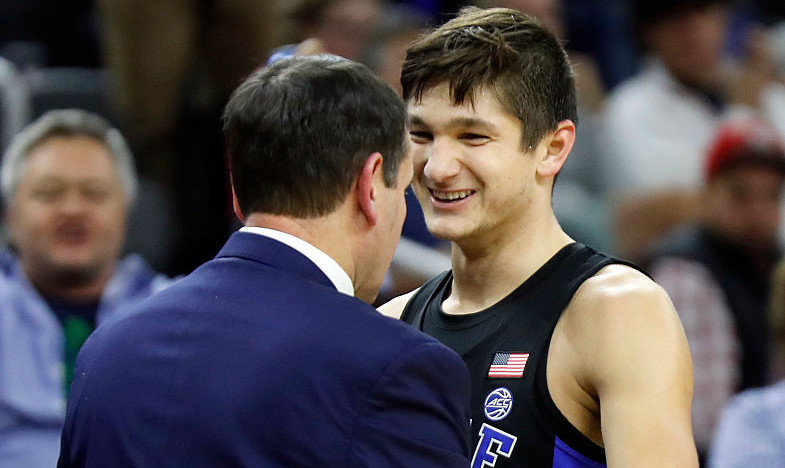 Duke star Grayson Allen returned from an indefinite suspension after just one game when he was inserted into the starting lineup on Wednesday night in a game against Georgia Tech. The quick return from suspension took many off guard and led to many criticisms hurled Duke’s way.

But according to Duke head coach Mike Krzyzewski, what ended up being a one-game suspension was sufficient in serving its purpose for Allen, who had been caught tripping opponents intentionally on multiple occasions.

“You don’t need to teach out in the public all the time.”

To be fair, that is absolutely correct. It was never likely Allen was going to be suspended for a very long time for his tripping of opponents, but ending what was labeled an indefinite suspension after one game (which just so happened to result in a loss) looked sort of odd. Regardless of the timing and how much of a coincidence it may have actually been, the responsibility is now on Allen to prove the message was received and the lesson was learned.

For his part, Allen has at least admitted his responsibility for the suspension.

“I talked to Coach many, many times when I came back after break,” Allen said. “We had a lot of conversations and meetings, and I went through a lot of stuff after practice. He ultimately felt I was ready to come back, and I felt good coming back, so I accept all the discipline that came way. I know it was my fault.”

Allen gave himself a timeout from the outside world in a sense to close him off from the hoopla surrounding his actions and suspension. That step back from the spotlight must have been what he needed to recharge himself and address what he needed to do to convince his coach to give him a second chance. Coach K is hoping to move on from this story and get his team focused on what lies ahead.

Of course, not only is he telling Allen and his team to move on, but he’s telling us all it is time to move on, and who are we to question the almighty Coach K?

“What he did was wrong. He was punished for it,” Krzyzewski told Bilas. “I think it’s time to move on, and I think the new role he has will be a good one for him. Hopefully he keeps getting seven assists and one turnover. I like where that might be going.”

Maybe Allen has cleaned up his act. We’ll see. The biggest question is this – what will happen in the event Allen does trip up his opponent intentionally again?