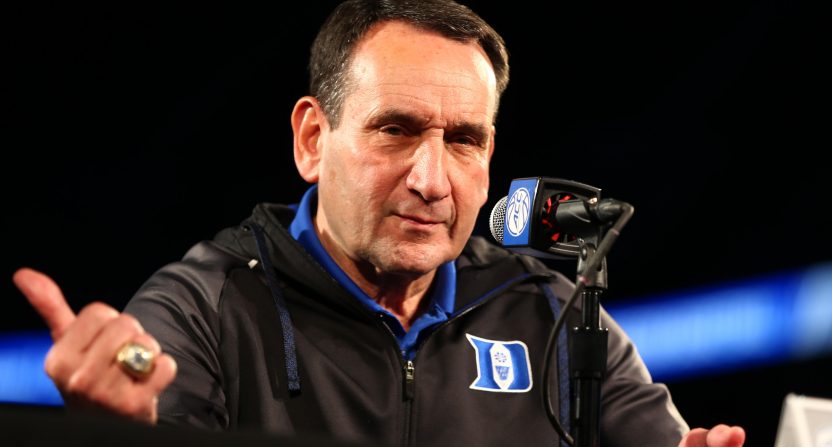 We’re going to miss Mike Krzyzewski when he’s gone. The college basketball kingpins are slowly fading into the distance. There aren’t many left and when Krzyzewski retires after this season, the sport will lose the greatest one since John Woodson.

He doesn’t need a gold watch or a rocking chair. Another national championship trophy would be appropriate. It seems fitting that in his final season, Coach K could finish his storied career with another NCAA title run. Duke (7-0) might win it all in a transition year as Krzyzewski will hand the baton to coach-in-waiting Jon Scheyer. The Blue Devils have already beaten then-No. 10 Kentucky and then-No. 1 Gonzaga.

College basketball is better when Duke matters. The Blue Devils are the sport’s most recognizable brand with Krzyzewski as the most recognizable face. His jet-black haircut has remained virtually unchanged. His nasal voice is distinct. He is the look and sound of Duke basketball.

People tune in when the Blue Devils are on television. Whether it’s to root for them or against them. A season without Duke being in contention just isn’t as fun. Last year was a rarity: an NCAA Tournament excluding the Blue Devils. They stumbled to a 13-11 record, snapping a streak of 24 consecutive March Madness appearances. That was weird.

Now all seems right. Krzyzewski has his usual star-studded roster. Duke is rolling. Makes you wonder why the 74-year-old is so eager to call it quits. He’s not even the oldest coach in the Atlantic Coast Conference. Jim Boeheim, 77, is still chugging along at Syracuse with no plans for retirement. Why should Krzyzewski make plans for unlimited golf course time with Roy Williams?

Perhaps he’s wary of the rapidly changing landscape. College athletes no longer face transfer restrictions. They can now benefit from name, image, and likeness opportunities. It’s a brave new world that will continue to evolve.

Krzyzewski, who began his head coaching career in 1975 and began at Duke in 1980, has survived decades by adapting. That’s how you win five NCAA titles — a feat arguably more impressive than Wooden’s 10. Wooden coached at a time when the NCAA Tournament field was half the size that it is today (a 32-team field in his final title year of 1975). Plus, it was easier to keep teams together for multiple title runs.

There are no more three- or four-year plans. Coaches are building year-to-year. With players leaving for the NBA or transferring, rosters turn over at a rapid pace. A title contender can be assembled quickly. But championship hopes can also disintegrate just as fast.

Coaching is more stressful than it has ever been. Fans and boosters have little patience. No excuses, no results.

Following last season’s disappointment, with a 13-11 record (9-9 in ACC play) and withdrawing from the ACC Tournament due to COVID-19, Duke has rebounded thanks to freshmen power forward Paolo Banchero, guard Trevor Keels, and junior forward Wendell Moore Jr.

This isn’t a star-studded team like the 2018-19 Blue Devils who featured Zion Williamson, R.J. Barrett, and Cam Reddish. But this squad has room for growth and might get the Blue Devils back to the Final Four for the first time since winning it all in 2015.

Beating Kentucky, 79-71, in the season-opener at the Champions Classic in New York City was impressive. But what the Blue Devils did against Gonzaga at the Continental Tire Challenge in Las Vegas made us all pay attention a little closer. Banchero, the possible No. 1 overall pick in the 2022 NBA draft, was bothered by cramps. He scored all but one of his 21 points in the first half. But Moore surged to get 16 of his 20 points after the break.

At a showcase event, Duke showed everyone that they are legit.

“We planned this well over a year ago,” Krzyzewski told reporters afterward. “We thought it might be a showcase game, and it was. But having this type of crowd was amazing. Obviously, we feel great about the win. We think we beat an outstanding basketball team.”

As good as Duke has been, the Blue Devils entered this week ranked No. 6 by the Pomeroy Ratings. They will play their first road game Tuesday night at Ohio State and will start conference play on Dec. 22 at home against Virginia Tech.

Duke is the overwhelming ACC favorite, but hasn’t won the league since 2010 and hasn’t captured it outright since 2006. And when it comes to the NCAA Tournament, they have underachieved in recent years, especially the Zion Williamson squad that was upset by Michigan in 2019.

However, this year is different. It’s the final season for Coach K. His players will feel the pressure to send him into retirement as a champion.

“They can’t play for me. They’ve got to play for us,” Krzyzewski said, via the North State Journal‘s Shawn Krest. “We’re not going to be good unless we own it. Like you can’t do it for somebody. You’ve got to do it for you, for your group. That’s the mentality that we’ve had, and we’ll continue to have.”