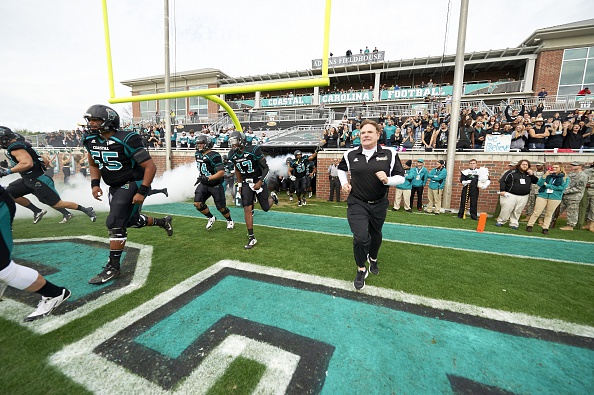 When the 2017 college football season kicks off, the Football Bowl Subdivision (FBS) will welcome two additional teams to get to a whopping 130 total. UAB will come back from the dead after a two-year hiatus. But the other new face, Coastal Carolina, is foreign to this, or virtually any, level of football.

The Chanticleers began play in 2003, and won the Big South (Football Championship Subdivision) title by year two. CCU was in the FCS playoffs by 2006, and got as far as the quarterfinals in both 2013 and 2014. They’ve been ranked every season since current head coach Joe Moglia took over in 2012. In 2015, the Chanticleers entire athletic department received an invite to the Sun Belt Conference.

Coastal Carolina’s not the first program to compile a rapid rise from nothing to the FBS level. Or even the fastest. USF took just four years from inception to I-A independent. UT-San Antonio played one year of FCS ball before jumping into a transitional season, then WAC membership in 2012. Old Dominion, Charlotte and Georgia State all took their own short trips from formation to FBS as well.

The fact that Coastal did things differently, however, may be their biggest advantage. Taking the time to build community and student support, a tradition of success, resources to compete and (most importantly) hiring Moglia are all factors many of those other schools had to work out on the fly. Not the case for CCU in year 15 for the program.

After years of success at Brooks Stadium, only last year did the school look to cash in and apply for state funds to expand seating to accommodate more than 20,000 fans. The $32 million project was approved, barely. But the venue will likely be packed for the foreseeable future.

For three straight seasons now, the Chanticleers have recruited top-140 classes according to the 247Sports composite rankings — topping out at 124th this year. They’ve also grabbed FBS and JUCO transfers on both sides of the ball. There are more three-star players on this roster than several of the teams you’ll see around the bottom of the Sun Belt and Conference USA (and probably UMass too).

Those are obviously key to success in both the long and short terms, but both fail to exist without geography and solid coaching.

Being located in South Carolina (near Myrtle Beach) is one way to gain a quick first step. South Carolina was one of the top 25 recruiting states in 2017, and being that close to talent helps mitigate drop off when moving up a level. It was significantly easier for Appalachian State, Charlotte, Georgia Southern, Georgia State, Old Dominion, South Alabama, Texas State and UTSA to move up than it was for UMass and Western Kentucky. That was because of each school’s respective access to in-state talent. The list of former schools has it. The latter two don’t. WKU’s rebounded by hiring well. UMass is in independent purgatory.

Moglia, on the other hand, is a little less obvious of an advantage. A former financial sector CEO-turned-football coach shouldn’t be able to pull off what he has. But as a result of his experience, he’s run the program differently, and that’s helped sell everyone (players, students, media, fans) on Coastal. His teams and his coaching staff are always fresh and prepared for that week’s game (he stresses equal practice time for reserves and reasonable hours for assistants). He has quick methods of evaluation that harp on efficiency.

And that very well could be true — or if it wasn’t, how could you doubt him? He’s 51-15 as a head coach with the Chanticleers. But his next challenge is clearly much bigger than the one he faced each year in the Big South, where (future FBS member) Liberty and Charleston Southern were the biggest hurdles to jump.

The Sun Belt’s four best teams — Appalachian State, Arkansas State, Georgia Southern and Troy — are all on this year’s schedule. So is SEC West member Arkansas. Since Moglia was named head coach, CCU has played just one game against FBS opponent. That one, against South Carolina, resulted in a 70-10 defeat in 2013.

So despite this step up in competition, it does seem like Coastal is prepared. And maybe, even better prepared than some of its predecessors. The Chanticleers join a regional league in the Sun Belt (even more so once Idaho and New Mexico State leave after this year), with natural rivals and an opportunity to appeal to recruits around the Southeast every weekend. They’ll stand out with a visually arresting field, an interesting coach, an appealing campus location, and a history of both recent and sustained success.

No, they’re not in an absolute hotbed for talent like Georgia or Texas (or even North Carolina or Virginia). But they don’t have to be.

Coastal Carolina’s played the long game (relatively speaking) here toward making it to the FBS level. And even if it takes a couple years to hit their stride, it would seem they’re bound to succeed.