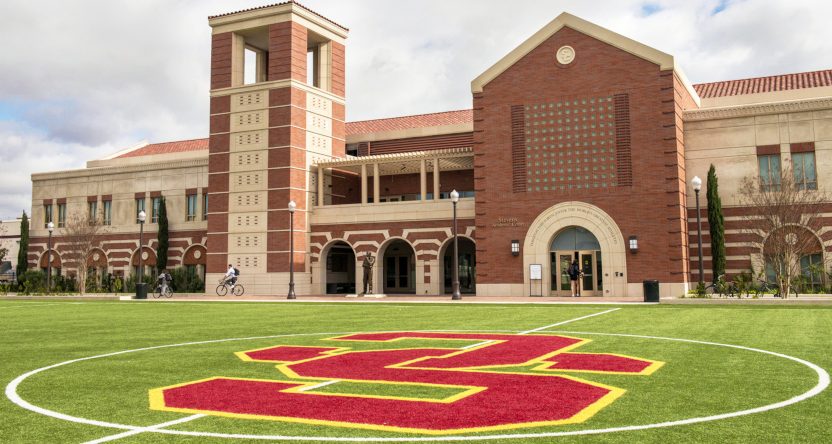 Much of the focus on the wide-ranging college admissions scandal that led to over 50 arrests Tuesday has centered on the involvement of famous actresses Felicity Huffman and Lori Loughlin, but there are massive sports implications here as well. The plan to get many of these students in involved pretending that they were recruits for particular sports teams, and that involved alleged bribes to coaches at many schools and even a senior associate athletic director at USC (their athletics building, the John McKay Center, is pictured above). Sports Illustrated has a rundown of most of the coaches involved:

Wake Forest volleyball coach William “Bill” Ferguson was indicted in the scheme on charges of conspiracy to commit racketeering. Wake Forest announced Tuesday that the University has placed Ferguson on “administrative leave” while they investigate the allegations against him.

Seems that Stanford is not messing around. No administrative leave for the sailing head coach. (Can’t believe I just typed that.) pic.twitter.com/pN8is5UrlA

That indictment also includes Donna Heinel, the senior associate athletic director at USC who prosecutors allege took in over $1.3 million in bribes into various USC accounts. In exchange for those bribes, Heinel “helped facilitate the admission of more than two dozen students as recruited athletes, even though many of those students had fabricated athletic credentials and some did not even play the sports they were purportedly being recruited to play.” Like the prospective crew athlete who’d never actually competed in crew, and thus had to use some trickery with photos and regatta lists:

The story prosectors told about a student recruited to USC’s crew team — without any previous crew experience — is wild.

This might be the first time “falsified list of regattas” has appeared in a DoJ indictment. pic.twitter.com/nPsm0ZCv5B

Or the student who was recruited for lacrosse, despite the school not having a lacrosse team:

The scheme, which was allegedly running from 2011 to present day, per court documents, involved Georgetown University, Stanford University, UCLA, the University of San Diego, USC, University of Texas, Wake Forest, and Yale.

One student was allegedly posed as a USC lacrosse recruit despite the lack of a lacrosse team in the Trojans’ athletic programs. Another prospective student was “made a long snapper,” despite weighing just 145 pounds. Other students athletic histories were similarly falsely described for the purposes of admission.

Meanwhile, long-time Yale women’s soccer coach Rudy Meredith (who’s been there for 24 years) is in another indictment alleging he received over a million in bribes for one “recruit” who didn’t even play soccer:

This could wind up having a big impact on the college sports world. Beyond the immediate coaches involved, this looks real bad for USC’s athletic department in particular, but also for some of the other schools. And it may also put a bigger spotlight on just how much colleges are willing to overlook when it comes to the grades of athletic prospects, even in less prominent sports. There’s a whole lot going on in this scandal, and some of its reverberations may be felt for years to come.