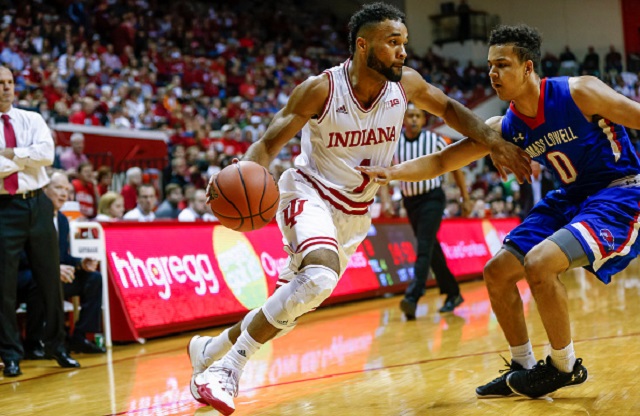 Just one week into the college basketball season, fans have been treated to a handful of sensational finishes. For instance, in arguably one of the most historic venues in sports — Madison Square Garden — Kansas guard Frank Mason sunk his teeth into the hearts of the Duke faithful. With 1.9 seconds left, the senior drained a pull-up jumper from the left elbow, putting the Jayhawks on top 77-75.

But during the past week, one team and one player each displayed similar prowess, while another team and player both suffered a setback. Each week, The Comeback will look at the rising and falling fortunes of a particular team and individual athlete. This is our College Basketball Stock Watch.

The Bears were picked to finished fifth in the Big 12 Preseason Poll, behind the likes of Kansas, West Virginia, Texas and Iowa State. However, head coach Scott Drew’s bunch won its first two games, including a commanding 66-49 victory over No. 4 Oregon. Naismith Award contender Dillon Brooks was out due to a foot injury, but Baylor proved it can hammer a talented roster, comprised with guards Dillon Ennis and Tyler Dorsey.

Over its first two contests, the unit showed its much-improved zone defense, yielding only 55 points per game. A campaign ago, the Bears ranked No. 151 in the nation in defensive efficiency (1.01 opponents’ points per possession). Seven-footer Jo Lual-Acuil Jr. stands right in the middle of the refinement.

The junior has accumulated 10 points, 11.5 rebounds and 5.5 blocks per contest. On Tuesday afternoon, Acuil Jr. exhibited his skillset to a national audience with a monstrous block of the Ducks’ Kavell Bigby-Williams. If he and guard Manu Lecomte, who’s posting 15.5 points and 8.5 assists per game, continue their success, Baylor should jump into the AP Top 25 Poll soon.

Following surgery on his right knee last January, the Hoosiers couldn’t determine how the junior guard would perform in his first game back against Kansas. Nevertheless, Blackmon Jr. excelled, manufacturing 26 points and hitting 4-of-8 from deep in Indiana’s 103-99 upset win in overtime. Five days later, he kept up his scorching start by tacking 23 points and five triples onto Massachusetts Lowell.

On Monday, Blackmon was named Big Ten co-player of the week alongside Illinois forward Malcolm Hill.

Throughout the offseason, sophomore forward O.G. Anunoby was picked as the candidate to explode in Bloomington, Ind. He’s undoubtedly extremely athletic, but Blackmon Jr. notched 15.7 points per game as a freshman, as well as 15.8 points per contest prior to the injury in the 2015-16 campaign.

With forward Thomas Bryant in the mix, the 6-foot-4, 200-pounder may not lead Indiana in scoring for the remainder of the campaign. Yet, his shooting stroke can clearly carry the Hoosiers. Moreover, it’ll help replace ex-IU guard Yogi Ferrell’s production.

Placed No. 18 in the first AP Top 25 Poll of the season, UConn laid a dud in their first two contests. In the season opener, the Huskies lost to aforementioned-UMass Lowell 67-58, which was obviously no match for another elite team in the country. Subsequently, Northeastern, who was projected to finish fifth in the Colonial Athletic Association, provided the nation with another upset, defeating them 64-61.

As a team, head coach Kevin Ollie should blame a part of his group’s struggles on their poor offensive performances. In two games, the UConn has shot 37.5 from the field and 27.5 from behind the arc, too. Besides sophomore guard Terry Larrier’s 18 points per game, the rest of his teammates have failed to find a rhythm. On top of that, opponents are out-rebounding the Huskies by an average of plus-6.5.

After losing three double-figure scorers in guards Daniel Hamilton, Sterling Gibbs and forward Shonn Miller, UConn must quickly overcome their struggles on offense. With Oklahoma State, Syracuse and Ohio State left on the non-conference slate, Ollie’s crew needs beat at least two of those programs to regain some respect.

The 6-foot-5, 205-pounder averaged 14.8 points as a freshman, and many expected him to enter the ranks of the premier players in the country. Instead, Trier didn’t suit up for either of the Wildcats’ first two contests. Furthermore, he wasn’t even present for Pac-12 Media Day on Oct. 21.

According to a few sources, the guard may not be eligible to step on the court this season. Unfortunately, head coach Sean Miller won’t comment on the issue, leading to extra speculation that he’ll bolt for the NBA draft once the campaign concludes.

Even though Arizona fended off then-No. 12 Michigan State in its opener, the Wildcats’ depth can’t handle a prolonged absence via Trier. Junior guard Kadeem Allen was already forced to sit out versus the Cal State Bakersfield Roadrunners with a knee injury. Albeit two games,  the Wildcats sit No. 144 in DI in offensive efficiency, harvesting 1.02 points per possession.

Likewise, basketball enthusiasts are hungry to watch one of the game’s top prospects.