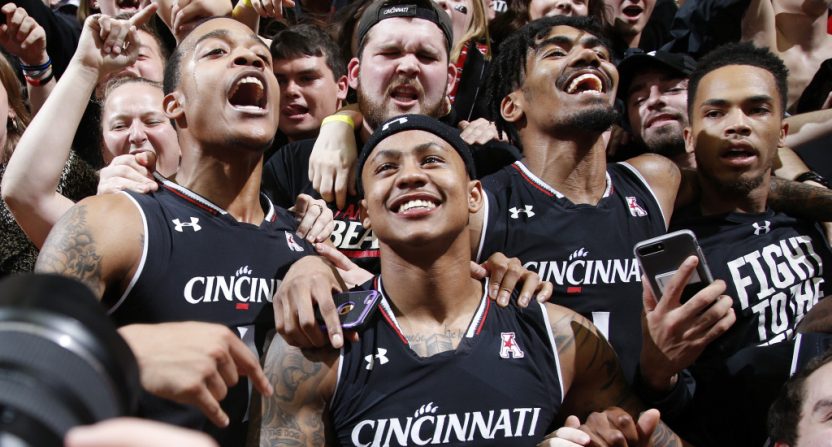 Unlike last week, there were no major upsets in the college basketball universe. Yet a possible Final Four matchup provided plenty of excitement in Lawrence, Kansas on Wednesday, where the No. 2-ranked Bears (20-2, 7-2 Big 12) squared off against the No. 3 Jayhawks (20-2, 8-1).

Surprisingly, Baylor had never won a contest in Allen Fieldhouse before the two schools tipped off, and that streak continued in a 73-68 defeat. Coach Bill Self and the Jayhawks received a gift with under a minute left, as Baylor guard Manu Lecomte should’ve been awarded an and-one off a jumper from the top of the arc. Unfortunately, the referees missed a clear-cut foul to keep a two-point deficit intact.

Great call-out by @JarrettTSutton on this. Everyone will talk about Jackson's dunk, but watch Lucas on this play: pic.twitter.com/6SZFqTV7Ov

Moreover, Josh Jackson pounded the Bears with a 23-point, 10-rebound effort, notching his second consecutive double-double. His fabulous play might end up ceasing for the time being, though, as he and fellow guard Lagerald Vic were named as persons of interest in a vandalism incident on Wednesday. Recently, forward Carlton Bragg was handed an indefinite suspension for violating team rules, so the program appears to be in a state of turmoil.

Without more information, though, Jackson and the Jayhawks won’t be added to The Comeback’s College Basketball Stock Watch. Instead, another team and a player jump into the spotlight while two others begin to slide.

How about Troy Caupain for Cincinnati! His decisive jumper to beat Tulsa is much better with Titanic music! (@GoBearcatsMBB @GoBEARCATS) pic.twitter.com/KkvQ2jRadQ

When a team boasts the longest winning streak in the nation, it deserves some attention. The Bearcats (20-2, 9-0 American Athletic Conference) have won 13 straight and rallied from an 11-point, second-half deficit in their latest game against Tulsa. With 4.4 seconds to go, Troy Caupain sealed the comeback victory with a game-winning pull-up jumper. The 6-4, 210-pound guard ranks third on the team in scoring with 10.9 points per contest.

Lacking a dominant scorer, coach Mick Cronin’s bunch relies on its defensive intensity, placing seventh in the country in defensive efficiency (.88 points per possession). That foundation has allowed Cincinnati to sit within the top 25 of the aforementioned category for the past seven seasons. As a result, the Bearcats are yielding just 61.5 points per game (No. 10 in Division I). His match-up 2-3 zone, which he learned from his days with Rick Pitino in Louisville, gives opponents plenty of fits.

Cincinnati is averaging 79.0 PPG, the most that any team under Mick Cronin has averaged since he took over the Bearcats in 2006. New Dawn.

Offensively, guards Jacob Evans (14.1 ppg) and Kyle Washington (13.1 ppg) lead the way. Although the 6-foot-6, 210-pound Evans shoots just 39.7 percent on two-point jumpers, his effective field goal percentage remains at such a high clip (57 percent) because of his knack for the three-ball (38.5 percent) and ability to finish around the basket (75 percent). Expect the sophomore to continue to aid Cincinnati’s undefeated surge through the AAC.

After scoring a career-high 32 points in an overtime win at Rutgers on Saturday, Happ began to jump onto the radar of college basketball junkies. But the 6-foot-10, 232-pound forward has generated stout numbers throughout the Badgers’ conference slate, emerging as the only player to lead his team in points (17.1), rebounds (8.1), assists (3.1), steals (2.8) and blocks (1.5) per game in Big Ten play.

Additionally, Happ (14.5 ppg) is such a effective scorer because of his prominent handles for a big. Against the Scarlet Knights (:54), the sophomore went coast-to-coast for an easy layup. Many other players with his size would instead hand the ball off to the point guard and then attempt to find space on the block. Plus, along with forward Nigel Hayes (3.1 apg), Happ can even play the facilitator role from the high-post, providing No. 10 Wisconsin with two excellent passers from that spot.

Ethan Happ just scored 32 in a game where he was double and triple teamed the entire time and none of his teammates made outside shots.

On top of that, the Illinois native displays an extremely efficient touch near the rim (80.8 percent). Despite Purdue forward Caleb Swangian (18.8 ppg, 12.9 rpg) posting a substantial stat-line as well, Happ seems to have grasped control of the Big Ten Player of the Year award.

Northwestern (No. 25 in AP Poll, unranked in coaches’ poll)

Winners of six of their last seven games, the Wildcats haven’t faced much adversity in conference play. Nevertheless, within a 48-hour window, Northwestern (18-5, 7-3 Big Ten) encountered plenty of distress. On Tuesday, guard Scottie Lindsey, who leads the team in scoring (15.4 ppg), missed Wednesday’s tilt versus No. 20 Purdue due to an illness. Subsequently, his squad was annihilated by the Boilermakers in a 80-59 loss.

In the defeat, coach Matt Painter’s core shot an impressive 52.2 percent from the perimeter, along with a 48.8 percent clip overall. Given Lindsey’s defensive prowess, the Wildcats severely missed his presence against Vance Edwards and Dakota Mathias, who combined to hit seven threes. On the opposite end of the floor, Northwestern struggled just as much, amassing a mere 35 percent clip from the field, while shooting just 14.3 percent around the perimeter.

Northwestern's Scottie Lindsey made 71 field goals during all of 15-16. Already has 113 this year. Could be Big Ten's most improved player.

On Thursday, coach Chris Collins stated the 6-foot-5, 210-pound guard’s return date was unclear. Considering Northwestern is 7-0 when Lindsey scores at least 19 points, his absence will be felt, especially with Wisconsin and Maryland looming on the docket. A chance to grab a top eight seed in the NCAA Tournament is still obtainable, but teammates such as Vic Law (13.5 ppg) and Bryant McIntosh (13.2 ppg) must find a way to produce without him.

Following nine straight double-digit scoring outputs, Vasturia’s recent shooting woes hurt the No. 20 Irish (17-6, 6-4 ACC) during their last two losses (Georgia Tech, Duke). In those games, he combined to hit only 2-of-16 from the field, including one three-pointer.

In his senior campaign, the 6-foot-6, 212-pound guard’s shooting stroke has been fairly consistent from the perimeter as a whole, compiling a 41 percent clip. Additionally, Notre Dame relies on much of its offensive output from downtown, ranking No. 16 in the country in that category (39.9 percent). In fact, six of coach Mike Brey’s core personnel has racked up at least 38.1 percent of their 3-point shots. Hence, he can’t afford to see one of his most skilled shooters go through a mini-slump.

With a duel against No. 12 North Carolina set for Saturday, the Irish need Vasturia, who sits third on the team in scoring (14.1 ppg) to regain his form in a hurry in order to halt their three-game skid. Also, he’d be wise to do so for his own NBA draft stock, which remains low at this point.