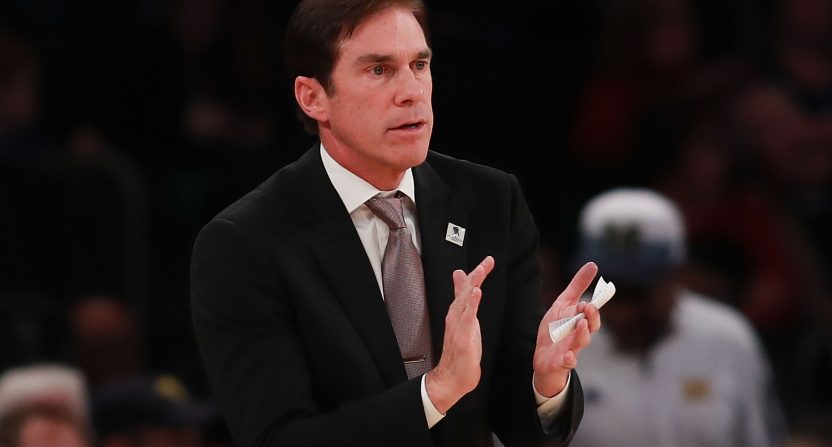 In a wild week of college hoops, Allen Fieldhouse was the scene for another thrilling finish. Except this outcome was deemed to be nearly impossible and for good reason.

With 2:43 left in the second half, Kansas trailed West Virginia, 64-51, appearing on the verge of losing consecutive games at home for the first time since 1989. Instead, coach Bill Self’s squad flipped the script and guard Frank Mason capped off the incredible comeback with two free throws with seven seconds to go, sending the contest into overtime. There, the Mountaineers’ hopes of stealing the Big 12 title from the Jayhawks for the first time in 13 seasons were quickly halted, thanks to two clutch threes via guard Devonte’ Graham.

Luckily for coach Bob Huggins, a different team, along with another player, suffered a worse stretch over the past seven days. On the contrary, another pairing found themselves on the upswing. It’s time for the The Comeback’s College Basketball Stock Watch.

Two weeks ago, Cincinnati looked to be the most fascinating team out of the American Athletic Conference. However, Southern Methodist (23-4, 13-1 AAC) hopped over its conference rival after a 60-51 win over the Bearcats on Sunday, ending their 15-game winning streak. In the victory, the Mustangs stymied coach Mick Cronin’s offense, holding the group to a 34.4 percent clip from the field.

Coach Tim Jankovich possesses one of the more underrated units on that side of the floor, ranking third in the country in scoring defense (58.6 points per game). Guards Shake Milton and Sterling Brown lead the effort, averaging at least 1.3 steals per game apiece. Plus, SMU places at No. 19 in adjusted defensive efficiency on KenPom (.93 points per possession).

Offensively, 6-foot-6, 230-pound Semi Ojeleye, who transferred from Duke following the 2014-15 season, paces the lineup with 18.2 points per contest. The forward also boasts a 17-percent improvement beyond the three-point arc from a season ago. Given his impact, expect the Mustangs to represent one of the elite mid-majors in the NCAA tournament.

Last time Angel Delgado faced St. John’s, he went for 21-and-20. Let’s throw it back to Jan. 22. pic.twitter.com/tSnpbTrCWn

While the Pirates (16-9, 6-7 Big East) were left for dead two weeks ago, they’ve bounced back by winning three of their last four games. One of the most impressive victories came against the No. 20/22 Creighton Bluejays in a six-point win on Wednesday and Delgado was at the forefront of their success, notching a 17-point, 17-rebound effort.

The 6-10, 240-pound forward constitutes a double-double threat each contest, tallying one in 18 of the last 19 games. His best showing was a 21-point, 20-rebound performance in a seven-point win over St. John’s on January 22. Moreover, that run nearly matches highly-touted Purdue forward Caleb Swangian’s double-double run of 19 in 20 contests, proving the Dominican Republic native deserves more praise.

Angel Delgado just came over and celebrated with some young fans about 5 feet in front of me. Guy gets it. #shbb

Additionally, Delgado places first in the country in rebounds per game (13.2). His dominance on offensive glass can’t be overlooked either, as he owns a stout 68.8 putback percentage on 54 attempts. Although he wasn’t named a finalist for the Kareem Abdul-Jabbar Award, he should now be easily considered as a second-round NBA draft selection.

Despite competing in one of the tougher conferences in college basketball, the Cavaliers (18-7, 8-5 ACC), losers of four of their last six games, haven’t done themselves any favors down the stretch. In fact, two of their latest defeats (at Syracuse, at Virginia Tech) came against opponents, who are fighting for a spot in the Big Dance. Even though coach Tony Bennett’s squad is a lock to make the NCAA Tournament, their inability to knock off inferior competition is concerning.

On Wednesday, Virginia’s slide continued in a 65-55 loss versus No. 12/14 Duke, yielding 21 of forward Jaylon Tatum’s 28 points in the second half. The 6-8, 205-pound freshmen phenom racked up five of his six triples in the final frame, burning the Cavaliers’ patented, pack-line defense. Furthermore, they allowed a head-scratching 1.11 points per possession to the Blue Devils. Coach Krzyzewski’s stars seem to be finally exhibiting their highest potential, but Bennett-led teams rarely get exposed to that extent.

On top of that, Virginia has given up an average of .99 points per possession over the last three games. Due to the fact that there’s a clear lack of scoring beyond guard London Perrantes, the team needs to rebound defensively against the well-rounded No. 10/9 North Carolina Tar Heels on Saturday.

Following six losses in their last seven affairs, the Hoosiers (15-12, 5-9 Big Ten) have quickly dropped out of the NCAA Tournament picture. Despite Bryant’s production (13.1 ppg) staying fairly consistent over that span, his last two showings played a major factor in their respective defeats (vs. Michigan, at Minnesota).

In those match-ups, the Rochester, New York native averaged a mere eight points, as well as notching a 27 percent clip overall. Against the Golden Gophers, the 6-10, 255-pound forward strung together his worst performance of the season, shooting just 3-of-14 from the field. Considering guard Robert Johnson (13.2 ppg) didn’t even break into the scoring department, the Hoosiers couldn’t afford a woeful performance from one of their go-to options.

After returning to school for his sophomore season, Bryant previously found himself in the first-round range of some mock drafts. However, his shooting touch (53.3 percent) must return to form versus the Iowa Hawkeyes on Tuesday in order to retain that positioning.