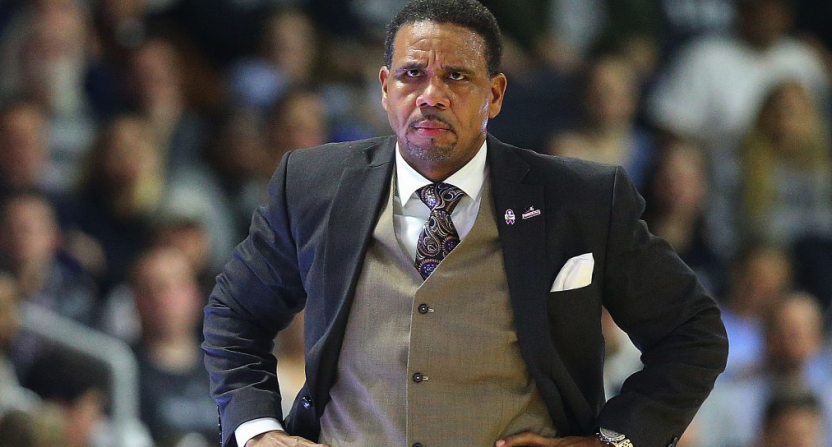 College basketball fanatics should start referring to Dillon Brooks as a synonym for game-winner. While Kansas’ Frank Mason III essentially locked up the Naismith Player of the Year Award after his 23-point, eight-assist performance in a win over Baylor on Saturday, the Oregon guard is making one final push for the honor.

On Wednesday, Brooks drilled a triple right before the final horn, delivering the Ducks (25-4, 14-2 Pac-12) a last-second victory over Cal (18-9, 9-12). On the flip side, the Bears’ NCAA Tournament resume took a hit with the loss. In fact, coach Cuonzo Martin’s group was up by as many as 16 points in the second half.

Even though Brooks and his opposition could each warrant a spot in this week’s College Basketball Stock Watch, two other duos heading in opposite directions were more deserving.  We’re only few weeks away from the beginning of March Madness, so it’s time for the stretch run.

Oregon's Dillon Brooks from deep to beat Cal on the road pic.twitter.com/tREIPkeCZS

Providence (unranked in either poll)

Just over two weeks ago, the Friars (17-11, 7-8 Big East) appeared to be headed for the National Invitation Tournament (NIT) come mid-March. But following their thrilling 68-66 win in Omaha, Nebraska on Wednesday, coach Ed Cooley’s unit put itself firmly on the bubble of the NCAA Tournament. Guard Kyron Cartwright provided the heroics, knocking down a game-winning three-pointer with two seconds left against No. 23 Creighton (22-6, 9-6).

Moreover, Providence has won three straight games, including victories over No. 22 Butler, who just handed Villanova’s seniors their first-ever loss at home, and Xavier. After Kris Dunn and Ben Bentil’s departure for the NBA, Cooley was expected to endure a rebuild this season. Nevertheless, the aforementioned Cartwright and forward Rodney Bullock have filled in well, especially of late. During the win streak, the 5-foot-11, 185-point guard is posting 14.7 points and 7.3 assists per game, and Bullock has contributed 12.7 points and 9.7 rebounds per contest.

If the Friars can win out (vs. Marquette, vs. DePaul, at St. John’s), they should find in a spot within the field of 68.

Remember when doubt surrounded Trier’s chances to step on the floor this season? Well, his off-court issues are now a distant memory, and the 6-5, 205-pound sophomore is exhibiting the offensive prowess that vindicated his name in the preseason conversation for the Naismith Award. Over the last two contests (vs. USC, vs. Washington), the guard is averaging 23 points on 61.9 percent shooting.

Plus, he notched a career-high 25 points in a 13-point win against USC on Thursday. Considering the Seattle native has only played in 10 games this season, expect him to continue to improve prior to the Big Dance.

Furthermore, since the Wildcats now contain two legitimate shot generators in Trier and freshman phenom Lauri Markkanen, they’re among the favorites to earn a ticket to the Final Four, which would constitute their first trip under coach Sean Miller. Without Trier, those chances take a serious hit.

Baylor led Kansas 65-59 with 3:34 left in the second half, but coach Scott Drew’s bunch failed to score the rest of the way. How? His counterpart Bill Self enacted a double-team on Johnathan Motley (16.9 ppg), Baylor’s most prolific scorer. Following that decision, Drew’s offense struggled mightily to regain its offensive rhythm and Kansas took advantage on the other end.

ICYMI, No. 3 Kansas escaped with a narrow win over No. 4 Baylor thanks to a late 8-0 run. #RockChalk #kubball pic.twitter.com/psu8UYchOW

Additionally, on the final possession, Self kept his magic act up, plotting the perfect double-team on guard Manu Lecomte (22 seconds). Subsequently, the junior barely got off a clean look.

Although the Bears bounced back with a 60-54 victory against Oklahoma on Tuesday, the team’s back-to-back defeats prior to it shouldn’t be ignored. Over the last three games, Baylor has amassed a mere 1.02 points per possession. That total isn’t sustainable if Drew wants to avoid another first-round upset in the NCAA Tournament.

Despite the fact that the Wildcats (26-3, 13-3 Big East) are locked into position for another deep run in March, one of their stars has struggled a bit lately. In the aforementioned loss to Butler, Jenkins shot a mere 1-of-8 from the field, as his one made bucket came from deep. While the 6-6, 235-pound senior weaved together an impressive performance in Saturday’s win against Seton Hall with 22 points on 8-of-10 shooting, there’s no denying that he has regressed in his final collegiate season.

As a junior, the Maryland native rung a 45.9 percent clip from the field. Now, he sits at 39.5 percent. If Jenkins returned to Villanova in attempt to win another title, he’ll need to regain his form from the 2016 Big Dance. Nearly a year ago, he was unstoppable (18.7 ppg), amassing 55.2 percent clip overall, as well as connecting on 41.7 percent of his three-point attempts.

One of Jenkins’ deadliest weapons is his pump-fake, and he usually reverts to this tactic to get to the free-throw line when his shot doesn’t drop. Against the Bulldogs, the forward attempted six free throws, along with another eight in a 2-of-8 shooting display at DePaul on Feb. 13. Nevertheless, his draft stock will also plummet if his jumper isn’t revived.