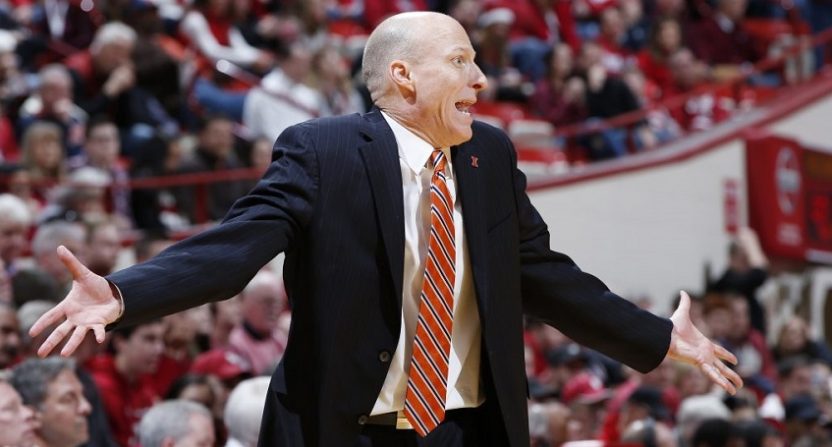 Apparently, touchdown passes now occur in college basketball too. That’s essentially what Northwestern accomplished in its thrilling 67-65 victory over Michigan, likely sending the Wildcats on their first trip to the NCAA Tournament.

With 1.7 seconds to go, forward Nathan Taphorn delivered nearly a full-court pass to Derek Pardon, who converted the bucket at the buzzer. Considering Taphorn executed an impeccable dime to allow for the manageable jumper, the sequence should go down as the greatest play in program history. Moreover, Pardon missed some crucial free throws down the stretch, so his game-winner was well-timed.

Despite picking up an enormous win, Northwestern won’t enter the College Basketball Stock Watch this week due to its loss against Indiana on Saturday, blowing a seven-point lead with less than two minutes left. However, another team from the state of Illinois finds its way into the mix, along with a trio of other participants. We’re less than a week and a half away from Selection Sunday, so brace yourself for the subsequent madness.

Illinois (unranked in either poll)

Following wins in five of their last six contests, the Illini (18-12, 8-9 Big Ten) have suddenly entered the conversation for a bid into March Madness. The streak was highlighted with a 73-70 victory against Michigan State on Wednesday, in which senior guard Malcolm Hill racked up a game-high 22 points to carry Illinois in his final home game.

Suddenly, coach John Groce’s bunch boasts a competent resume, notching five victories versus the RPI Top 50. Its two wins over the aforementioned Wildcats, who could possibly receive a top-eight seed in the Big Dance, assists the team tremendously. Additionally, the Illini haven’t lost to a program outside of the RPI Top 100. The only head-scratching defeat came in Champaign against Winthrop in late November, but even the Eagles rank first in the Big South Conference.

Moreover, the Illini are neck-and-neck in defensive efficiency with elite programs in the nation, yielding  just .88 points per possession over their last three games. The aforementioned Hill and fellow guard Kipper Nichols are aiding that effort with tremendous on-ball defense. If the unit picks up a win against Rutgers on Saturday, as well as one in the conference tournament, it should lock up a ticket for March Madness.

The West Palm Beach, Florida native is extremely efficient from either the low- or high-post, as he’s shooting 62.9 percent from the field, placing No. 21 in the nation. His combination of strength and size also grants him space to consistently square up above the opposition. That factor has helped lead to 10 20-point, 10-rebound performances this season, the most in his conference.

Within DraftExpress‘ latest mock draft, the sophomore is projected to be selected at No. 16 overall. However, expect his stock to keep gaining traction if Wake Forest earns a spot in the Big Dance. After the win over the aforementioned Cardinals, Collins and his co-workers appear to have positioned themselves well for the tourney. But a victory against Virginia Tech on Saturday could go a long way toward sealing that up.

Xavier (unranked in either poll)

In mid-February, the Musketeers (18-12, 8-9 Big East) seemed as if they’d waltz into the NCAA Tournament. Nevertheless, a six-game losing skid should have coach Chris Mack’s group fairly concerned for its chances come Selection Sunday. In the most recent defeat, Xavier (95) squandered the most points an opponent has ever produced at the Cintas Center in an 11-point loss to Marquette.

Diving into their woes, the Musketeers are allowing an abysmal 1.23 points per possession in their last three games. Versus the Golden Eagles, coach Steve Wojciechowski’s crew exposed Xavier’s concerns to its peak, shooting 61.1 percent from the field. Many of their issues revolve around the absence of guard Edmond Sumner (15.1 ppg), who tore his ACL against St. John’s in late January. Without him, the team lacks an impactful presence on both sides of the floor.

Unexpectedly, the program faces a must-win game against DePaul (9-21, 2-15), sitting at No. 176 in KenPom‘s rankings, on Saturday. A loss to the struggling Blue Demons would put them squarely on the bubble with the Big East Tournament looming.

Luke Kennard has had a breakout sophomore season! @LukeKennard5 pic.twitter.com/bzs5mbXAT2

While the Blue Devils possess the roster to make a deep run in the Big Dance, Kennard’s shooting touch must improve down the stretch. In his last two games, the 6-2, 202-pound guard has amassed a mere 33.3 percent clip from the field. Overall, his field goal clip sits at a rock-solid 50.2 percent. Duke collected a win over Florida State on Monday, even with his dismantled shot. But on Saturday, coach Mike Krzyzewski’s group failed to overcome it in a 55-50 loss to No. 25 Miami.

In the contest with the Hurricanes, Kennard went just six-of-20 from the field, hitting only two threes in the process. Besides Kennard (45.4 percent), along with forward Jaylon Tatum (35.2 percent) to an extent, no one in Duke’s rotation has exhibited the ability to knock down threes at a reliable rate. Given the fact that the team attempts triples on just under 40 percent of their shots, Kryzewski can’t afford another cold night from the sophomore, especially with a match-up versus the high-powered North Carolina Tar Heels (84.4 ppg) set for Saturday.

Plus, his rise above Grayson Allen as the team’s No. 1 scoring option (19.8 ppg) provided him with a jump to the first-round of many mock drafts. He’ll need to regain his form for that to stick.