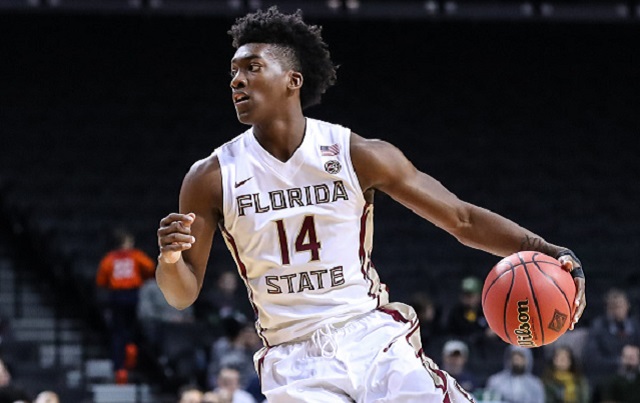 This past week in college basketball provided yet another stimulating game and exciting finish. This time around, it occurred between Seton Hall and No. 16/15 South Carolina on Monday evening in the holiest arena of the basketball universe: Madison Square Garden.

Then, despite Gamecocks’ guard P.J. Dozier’s missing a jumper ticks later, the sophomore received one final heave due to guard Myles Powell going hitting 1-of-2 from the free-throw line. For those who thoroughly enjoy watching March Madness-like moments in the non-conference portion of the schedule, the attempt nearly delivered an improbable sequence.

PJ Dozier just missed a 85 footer at the buzzer by about an inch. If that.

Even with a resume-building 67-64 victory, though, Seton Hall (8-2) fell just short on cracking in The Comeback’s College Basketball Stock Watch. Instead, a different team, as well as a player, find themselves on the upswing, and another pair slide down the rankings.

Following an 83-78 win against then-ranked No. 21 Florida on Sunday, the Seminoles barged into each of the prominent polls for the first time all season. Sophomore guard Dwayne Bacon was an instrumental in their surge, as he notched a season-high 24 points on 9-of-18 shooting in the victory. They also overcame freshman Jonathan Isaac‘s rusty return from a hip injury, hitting just 1-of-4 from the field.

Albeit an impressive win, Florida State’s offensive prowess was still severely underlooked prior to it. Coach Leonard Hamilton’s unit places No. 5 in the nation in field goal percentage (51.8), No. 7 in points per contest (89.6), ahead of both Kansas and Indiana, No. 10 in scoring margin (+20.8), and No. 12 in offensiveness efficiency (1.16 points per possession).

Additionally, the aforementioned 6-foot-7 Bacon, who averages 17.3 points per contest, has produced an abundance of consistency with double-figures in every matchup thus far. His jumper appears much-improved, too, with a 50.4 percent clip from the field, as well as shooting 37.8 percent beyond the perimeter. The 6-foot-10 Isaac is no slouch, either, accumulating 14.7 points and 7.1 rebounds per game. Overall, their overwhelming size advantage will continue to cause numerous mismatches.

Entering the season, guard Dillon Brooks was considered the Ducks’ (9-2) key to repeating another deep run in the NCAA tournament. Yet after Boucher’s 23-point, 19-rebound, five-block performance in a 14-point win versus Montana on Tuesday, he proved his effect could be just as vital.

During Boucher’s long expedition to Oregon, the 6-foot-10, 200-pounder scored 44 points in the Hang Time tournament in 2012 against one of the top AAU programs around. That showing triggered the attention of a prep-school team, with whom he began to flourish. Now, the senior is doing so at the collegiate level, becoming the sixth Pac-12 player since 2010 to own a player efficiency rating (PER) over 25 and a box plus/minus (BPM), which assesses the quality and contribution to a team, over 20.

In total, he’s amassing 14.1 points, 7.8 rebounds and 3.2 blocks per contest, along with shooting 58.8 percent from the field. Although his numbers aren’t overly superior to last season’s, he’ll continue to provide a clear-cut advantage around the rim nonetheless.

Picked to finish first in the Mountain West Conference prior to the season, the Aztecs have endured an awfully slow start. Even with a 73-41 victory over Alabama State on Monday, head coach Steve Fisher’s group still flopped in an 11-point defeat to an up-and-down Arizona State program on Saturday.

Evidently, San Diego State’s struggles revert back to its inconsistent offense. The Aztecs possess a 41.4 percent clip from the field, good for No. 262 in the country. Against the Sun Devils, they shot a mere 36.8 percent overall. On top of that, guard Jeremy Hemsley, who averages a team-high 17.1 points per game on 48.4 percent shooting, exited with a foot injury and failed to play in their latest affair.

While the program has never resembled a run-and-gun style of play under Fisher, placing No. 200 in Division I in possessions per contest (71.9), its woes versus poor defensive teams reveal plenty of concerns. For instance, Arizona State is yielding 82.3 points per game (No. 312 in the nation). Hence, besides the aforementioned Hemsley and fellow guard Trey Kell (14.1 ppg), others need to step up.

Prior to the Flames’ (5-5) affair against DePaul on Wednesday, the reigning Horizon League Freshman of the Year represented one of the more unknown commodities across college basketball. However, in the first half, Dixson tore his ACL, which will cost him the remainder of the season.

Through 10 games, Dixson’s 20.3 points per contest ranked No. 46 in DI. In three of those contests, he scored at least 30 points. Prior to the injury, the conference arguably held three of the most underrated scorers (Alec Peters, Cameron Morse, Dixson) in college basketball.

Furthermore, his shooting percentage spiked up nearly 11 percent (47.7) from a campaign ago. Plus, the sophomore was attempting a stout 8.4 free throws per contest (No. 12 in DI). Nevertheless, players must alter their styles of play as a result of this injury. For the 6-foot-7 forward, who relied primarily on his quickness, especially in traffic, it could be a rugged road to generating a significant impact once again.