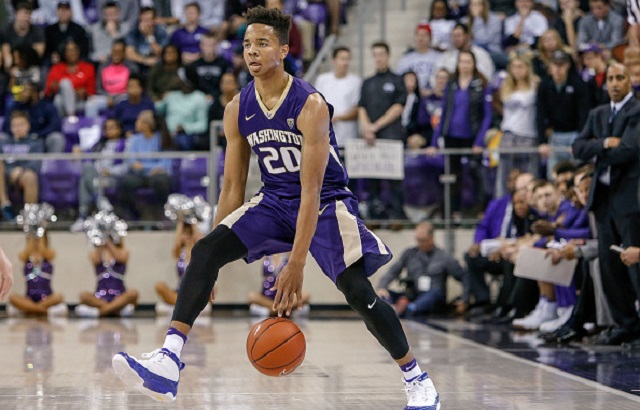 In another thrilling week of college basketball, numerous top 25-ranked teams nearly sagged down to the level of defeat. Among their upset-minded opponents, a pair of them seem to be solidifying an at-large bid into the Big Dance come March.

For starters, Virginia Tech, who has missed out on March Madness since its last appearance in 2007, came close to knocking off No. 15-ranked Notre Dame in a 76-71 loss on Saturday. Led by ex-Marquette head coach Buzz Williams, the Hokies (14-4, 3-3), already own a victory against No. 18 Duke, too. Then, there’s No. 24-ranked South Carolina, who defeated No. 19 Florida 57-53 on Wednesday, thanks to recently reinstated Sindarius Thornwell’s 20-point effort.

However, neither of these schools will find themselves in The Comeback’s College Basketball Stock Watch. Instead, a different program, along with a player, make a significant jump upwards while another duo embark on a hard collision with the ground.

Illinois State (unranked in either poll)

If you’re staring at the screen and thinking this selection stemmed from a typo, don’t fret. Although the Redbirds have endured a 17-year NCAA tournament drought, head coach Dan Muller currently possesses a unit capable of snapping that skid. Its talent was on full-display in Saturday’s 76-62 victory over Wichita State (16-4, 6-1 MVC), who placed first in the Missouri Valley Conference in five of the past six seasons.

In the win, ISU (15-4, 7-0) exhibited its defensive prowess, holding the Shockers to a 34.9 percent clip from the field. Surprisingly, Muller’s squad ranks fourth in Division I in the aforementioned category (37 percent). Additionally, the Redbirds sit No. 16 in the country in defensive efficiency (.85 points per possession). Even in a mid-major conference, their commitment to that end of the floor can’t be ignored.

Senior guard Paris Lee is one of the primary defensive enforcers, collecting 2.2 steals per contest. On Wednesday, he notched single-game high six steals in a 69-49 win over Bradley. The 6-foot-1, 185-pounder also ranks third on the team in scoring (13.1 ppg), behind forwards Deontae Hawkins (14.8 ppg) and MiKyle McIntosh (13.9 ppg). Expect the balanced bunch to continue to soar through the remainder of the conference slate.

Despite many already anticipating that the freshmen sensation will go No. 1 overall in the NBA Draft, the Huskies guard is still discovering ways to cultivate fans. Per usual, generating a heap of points usually does the trick.

Over the previous two games, Fultz averaged 35.5 points per contest, including a season-high 37 points in a double overtime victory against Colorado. More impressively, none of the 6-foot-4, 194-pounder’s made field goals came from behind the three-point line. Instead, he consistently attacked the lane to create both for himself and others, even with the Huskies (9-9, 2-4 Pac-12) trailing by 15 points in the second half. In total, the guard amassed eight assists.

On top of that, Washington has seemingly built a reputation as one of the worst defensive teams in the country, yielding 78.5 points per contest (No. 284 in the nation). Hence, Fultz normally needs to carry the load, which translates to his 314 field goal attempts (No. 14 in DI). Within that number, a mere 14.5 percent of his two-point makes have been assisted, exhibiting the Maryland native’s ability to truly produce on his own at a high clip (48.9 percent overall).

Just like Ben Simmons last season, though, college basketball junkies will most likely watch another star miss out on the Big Dance due to a weak supporting cast.

Entering their contest with Oklahoma on Wednesday evening, the Mountaineers (15-4, 4-2 Big 12) stood at No. 1 within KenPom.com’s rankings. Nevertheless, they struggled to slow down the Sooners’ youthful offense in a 89-87 overtime defeat.

Throughout the season, West Virginia’s full-court press has induced its opponents into 23.6 turnovers per game (No. 1 in the country). Yet the Sooners only supplied 12 of them, looking unfazed by head coach Bob Huggins’ patented tactic. Plus, Oklahoma somehow found its way back into the game after facing a 15-point deficit with under nine minutes to go. Given the Mountaineers’ reliance on the aforementioned strategy, they can’t afford to loosen up at any moment.

Earlier in the week, the group almost let the subpar Longhorns (7-10, 1-4) add onto its misery in a tightly contested 74-72 win. In the matchup, Texas racked up 19 turnovers yet still hung around without leading-scorer Tevin Mack (14.8 ppg), who sat out because of a suspension.

On the bright side, thanks in large part to guard Jevon Carter (11.8 ppg), the Mountaineers are tied for sixth in the nation in offensive efficiency (1.16 points per possession). But if they can’t sustain their turnover-oriented success, another short-stint in March Madness could be on the horizon.

Arguably the top point guard in DI, Watson Jr. will be forced to sit out the remainder of his final collegiate season via a torn ACL, which he suffered in a five-point win over Xavier on Monday. Previously, the senior was excelling in head coach Greg McDermott’s run-and-gun system, ranking No. 1 in the country in assists per game (8.5).

Moreover, Creighton possesses the nation’s second-best effective field goal percentage (60.2), which puts added value into threes. Watson Jr. weaved himself into that category quite well, shooting 50.8 percent from the field and 46.9 percent behind the arc. Considering the Philadelphia native’s three-point clip was drooping more than 17 percent lower a campaign ago, his commitment to pushing the Bluejays into the class of the elites was evident. Currently, they’re tied with the Mountaineers for seventh in the AP Top 25, as well as sitting eighth in the coaches’ poll.

“He (Watson Jr.) really is the engine that makes us go,” McDermott said in an interview with The Comeback in December. “Without him, we’re not the same team.”

In order to make a run in the NCAA tournament, Creighton (18-1, 5-1 Big East) must have another playmaker emerge. Guard Khyri Thomas, who’s averaging the second-most assists (2.6) on the team, could help fill the void. Nonetheless, the unfortunate injury may have cost Watson Jr. a shot at playing in the NBA.