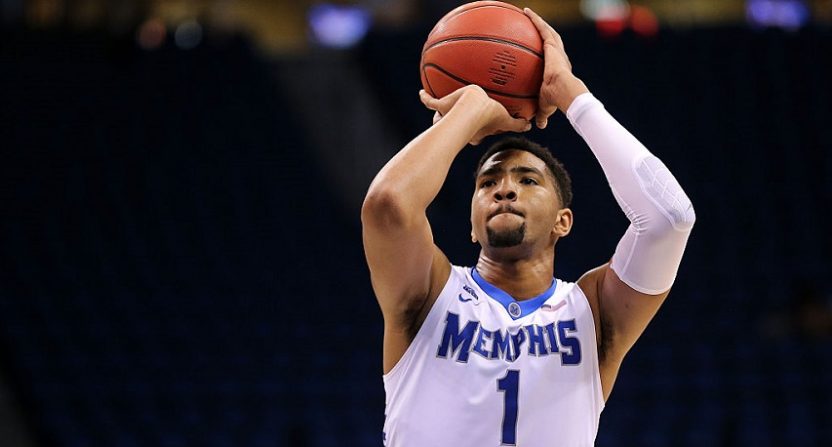 Schools and coaches treat college basketball as a business. Why should anyone balk when the players do the same?

It’s that time of year again. The sport’s own version of free agency has begun. ‘Tis the season to be transferring. As of Tuesday night, verbalcommits.com lisdted 434 transfers from the 351 Division I programs. Last year, over 700 left one school for another. This year, it wouldn’t be surprising to see a similar high number when all the data comes in.

Pity poor Memphis. The Tigers have arguably been the hardest hit with an alarming six (!?!) defections since its season ended. Tubby Smith has lost key players Dedric and K.J. Lawson from his roster. According to the Memphis Commercial Appeal, K.J. Lawson sent out this warm and friendly goodbye on his Twitter account: “Two middle fingers as I make my exit.” That tweet has since been deleted.

Memphis AD Tom Bowen says the transfers have “not surprised us” even though Tubby Smith said he was “surprised” by the Lawsons transferring. https://t.co/KS49oO7Tld

Memphis is not the only school hurting. Look at Rice, which lost its coach when Mike Rhoades took the VCU job. Now all of a sudden, instead of being a dark horse contender for Conference USA in 2017-18, the Owls are losing four players. Star guard Marcus Evans might be the best player on the market. He will reportedly choose between VCU, Miami and Arizona. Rice grad transfer Egor Koulechov, who was once at Arizona State, will play for his third different school.

Seemingly all across the nation, someone is losing somebody.

According to the NCAA in a comprehensive study released last November, 40 percent of all college basketball players who enter Division I directly out of high school transfer by the end of their sophomore year. About 90 percent of those who transfer are leaving for athletic reasons.

Some transfer to get more playing time, and often go to a less prestigious school. Some – usually graduate transfers who are immediately eligible and don’t have to sit out a year – “transfer up,” going to bigger programs.

“Across the country, more than 700 Division I men’s basketball student-athletes transferred last year. That record number of transfers is expected to be eclipsed again this year, as this trend continues to grow. However, Coach Smith and I are extremely optimistic about the future of our program.”

It was a measured/Pollyanna-ish response by Bowen, but what did you expect him to say? It’s his job to convey confidence in the basketball program. Even in the face of a crippling talent drain.

Of course, there is always another side to this equation. But first, let’s flash back to last fall when Kansas coach Bill Self had this to say about the transfer “epidemic” in college basketball.

OK. Let’s return to the present.

Self is losing a former 5-star recruit in 6-foot-10 forward Carlton Bragg. Don’t feel sorry for him. Self has been one of the big poachers in the transfer market. Guess where the aforementioned Lawson brothers are going? Yep, you guessed it: Kansas. The Jayhawks have brought in four transfers over the past year. The Lawson brothers will join Sam Cunliffe (Arizona State) and Malik Newman (Mississippi State).

KU is Transfer U.

So Self rails against player movement while simultaneously reaping the benefits of player movement? That’s college basketball coaching hypocrisy 101. Coaches preach loyalty and sacrifice ad nauseam, but often don’t hold themselves accountable. They make millions of dollars profiting off the unpaid labor in “amateur.” When those players perform well, the coach is rewarded with a raise, a better job or both.

They leave to do what’s in their best interests. Why shouldn’t players do the same?

The system is rigged against them. Coaches hold most of the power. Better to leave on your own terms. Sometimes they are forced out. Look at what allegedly happened at Northwestern.

The Wildcats were a warm, fuzzy story this March after finally reaching the NCAA Tournament. You may not have heard about ex-Wildcat Johnnie Vassar, who is suing the university after he said coach Chris Collins ran him off. Vassar is still at the school, but is no longer with the basketball team.

Coaches wield too much control over players. They can revoke their scholarships or prevent them from transferring to the school of their choice. Why do people get upset when players start exercising some power of their own? The number of transfers in recent years has steadily increased as more and more players use their freedom of choice.

Some have argued that too much player movement is adversely affecting the sport.

Sports Illustrated’s Pete Thamel wrote that the culture transfer is “killing Cinderella” in the NCAA Tournament. He cited a Sports Illustrated study of transfer data reveals that since 2012, the amount of players who have transferred up to higher-rated leagues from the low- and mid-levels of college basketball has more than tripled.

Thamel argued that mid-major players are now leaving to transfer up to larger programs. He quoted Sonny Vaccaro, a longtime sneaker company executive, who said: “Small colleges are becoming the minor leagues for the big schools.”

Essentially, mid-majors no longer have the depth necessary to make a run in the NCAA Tournament. The 2016 and 2017 NCAA tournaments didn’t have a true mid-major make the Sweet 16. The one mid-major to crash the Sweet 16 was Wichita State in 2015. (Of course, the Shockers are now moving out of the Missouri Valley Conference into the American Athletic conference).

That’s funny. The transfer epidemic and a lack of Cinderellas didn’t affect viewership. The first weekend of the NCAA Tournament drew its highest ratings in 24 years.

The bottom line is that coaches need to do a better job of identifying players who are a good fit for their programs. Players need to do their homework on coaches and what schools best suit their needs.

If irreconcilable differences lead to a split, no one should take it personally. It’s the cost of doing business. And never forget college basketball is a very big business indeed.