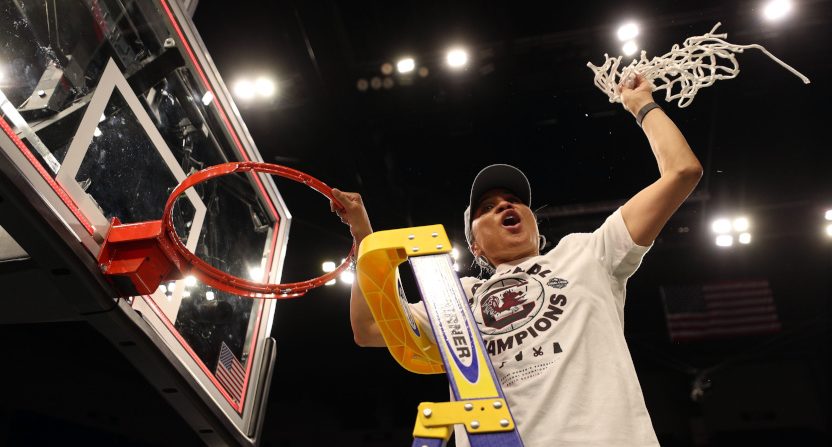 We’ve seen an incredible run from Dawn Staley with the South Carolina Gamecocks‘ women’s basketball team since she took that head coaching job in 2008. The latest element there is a 64-49 victory over the Connecticut Huskies in Sunday night’s national championship game, giving Staley and the Gamecocks their second championship overall and their first since 2017 (and also handing famed UConn coach Geno Auriemma his only loss ever in a national championship game, reducing him to 11-1 in those games).

In the wake of that victory, the college basketball world had a lot of praise for Staley. There was also a lot of praise for leading scorer Destanni Henderson (who had a career-high 26 points and also shone on defense), for national player of the year (and tournament MVP) Aliyah Boston (who had 11 points and 16 rebounds in this game, following up a dominant 23-point, 18-rebound showing against Louisville in the semifinals), and for the Gamecocks as a whole:

UConn was undefeated in National Championships but tonight, they had a date with Destanni and the South Carolina Gamecocks.

Destanni Henderson held Paige Bueckers to just 14 points as she shot 6-13 from the field.

impossible to have a cooler career end than Destanni Henderson hitting a career high in scoring in the final game of her senior season, which happened to be the national championship game, which she won

In October, South Carolina signed Dawn Staley to a 7-year, $22.4 million contract extension — one of the highest-paid coaches in women's basketball.

Tonight, the Gamecocks' investment in Staley pays off… again 🏆pic.twitter.com/GcUQs1caqn

I wrote this the other night after South Carolina beat Louisville, but after that balletic spin move from Aliyah Boston to put South Carolina up 22-8, sheesh, you've just gotta say… there's no one like Boston.https://t.co/1CP8teqkYM

She's the first player to average 15 PPG and 15 RPG in the tournament for a national champion. pic.twitter.com/exDpo1oyhO

This continues a remarkable run for Staley and the Gamecocks. They finished this year 35-2 and 15-1 in conference, giving them sole ownership of first place in the SEC for the fourth time in Staley’s tenure (they also tied for first in 2014-15). The Gamecocks are now 366-105 under Staley (a .777 winning percentage), with two NCAA titles and two further Final Four appearances. And this may be far from their last title, considering what Staley seems to be building in Columbia.