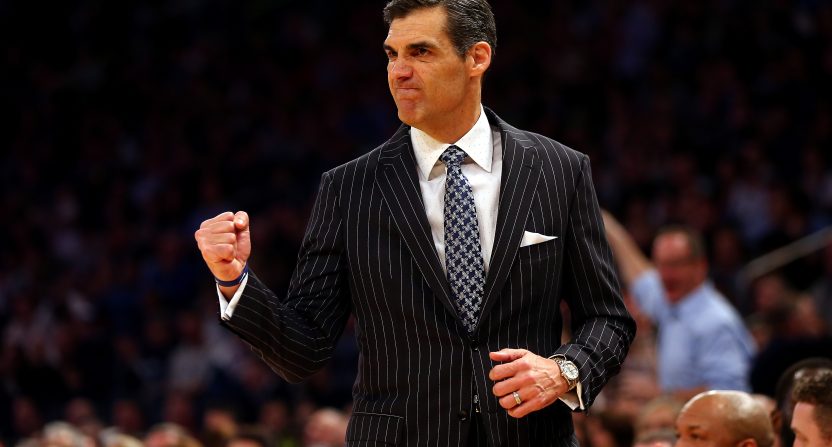 The men’s college basketball world got some unexpected news Wednesday night, with Villanova Wildcats coach Jay Wright suddenly retiring and with reports that Fordham Rams’ coach Kyle Neptune has been picked to succeed him. Here’s some of how that played out, with Shams Charania of Stadium and The Athletic starting the ball rolling that Wright (seen above in 2017) was seriously considering retiring, and with Jeff Goodman of Stadium quickly confirming Wright was retiring and naming Neptune (a Villanova video coordinator for the 2008-09 and 2009-10 seasons, and a Wildcats’ assistant coach from 2013-2021) as Wright’s likely successor:

Just in: Villanova’s Jay Wright — one of college basketball’s iconic coaches and a Naismith Basketball Hall of Famer — is seriously contemplating retiring this offseason, sources tell @TheAthletic @Stadium. Wright, 60, is meeting with his family and making final decision soon.

Jay Wright is likely retiring as head coach of Villanova soon, sources said, and that means a succession plan is in order for the university. https://t.co/o3fJHrUMEy

CBS’ Matt Norlander later had the news of Wright’s goodbye text to the program, which named Neptune as his successor:

And this is now in: Jay Wright just informed Villanova’s entire program that he is indeed retiring, a source tells @CBSSports. He also announced that Kyle Neptune is the next coach of Villanova men’s basketball.

Wright, 60, has been a NCAA men’s basketball head coach since 1994. He started by leading the Hofstra Flying Dutchmen to a 122–85 overall record from 1994 to 2001, then posted a 520–197 mark with Villanova from the 2001-02 season until now. With the Wildcats, he won national titles in both 2016 and 2018, and he led them to the Final Four four times, including this year. And it’s notable that while Wright certainly is young enough that another coaching job might be a possibility for him, ESPN’s Adrian Wojnarowski reported that while there’s NBA interest in Wright, he looks to be actually retiring (and would likely not consider the NBA down the road, either):

There's been significant NBA interest in Jay Wright through the years, but sources tell ESPN that his intention is to retire from coaching — not only Villanova. Those who've talked to Wright don't believe the NBA holds appeal to him — not now, or in future.

Norlander added to that:

It would be genuinely surprising to ever see Jay Wright even consider going into the NBA at this stage of his life, a source said. They added, "He got his taste with the Olympics and said he could never, ever coach those guys for 82 games."

And Wright’s retirement led to a lot of Twitter reaction:

Seriously, if I ever made eight figures in salary and have accomplished everything I could possibly accomplish in my industry like Jay Wright has, you would never see me again. Good for him.

Jay Wright won multiple titles, built Nova into a consistent national power, retired at near peak favorability, and left himself plenty of time to either enjoy retirement or have somebody (college or pro) make him a godfather offer to convince him to coach. Pretty tough to top.

nobody has ever been closer to the "cool guy walking away from an explosion" thing that happens in movies than Jay Wright saying "bang" and quietly walking away while his team won the national championship on a buzzer-beater pic.twitter.com/hVvaEEvdSR

If you told me this morning either:

2) We'd be invaded today by aliens from Neptune

I would have taken the aliens

In the span of 13 months, Roy Williams, Mike Krzyzewski and Jay Wright have all retired.

A total changing-of-the-guard moment in the sport of college basketball.

That’s certainly a remarkable career, and one of the best in college basketball. And it will be worth watching what Wright does from here. Broadcasters including ESPN and CBS/Turner will quite likely be very interested in him, and it’s also possible he might return to the coaching world down the road (but, as Neubeck notes above, it would likely take an incredible offer to bring him back). For the moment, though, he’s moving on, and Neptune will be taking over at Villanova after just one season at Fordham (where he took the previously 2-12 Rams to a 16-16 record). And that announcement of Neptune as Wright’s successor has drawn some notable reactions in its own right:

That program was finally looking on the way up. Was soooooo impressed when I saw them play in the A10 Tournament.

Oh man. Just when things were looking up for Fordham. https://t.co/5u9uIo0w3d

Fordham stumbles backward into a good basketball hire for the first time in like 40 years and it’s all for nothing after one year. Can’t make it up 😂 #fubb #fu

We’ll see who Fordham tabs to replace Neptune, and we’ll see how Neptune does at Villanova.