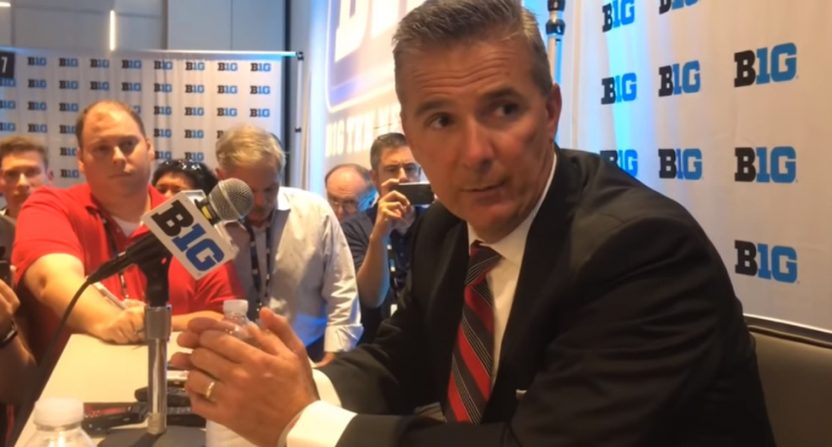 As we approach the beginning of the 2018 college football season, once again there are coaches in the spotlight for the wrong reasons.

Two out of seven coaches in the Big Ten East have been placed on administrative leave by their schools under totally separate circumstances. Ohio State’s Urban Meyer (seen above at Big Ten Media Days) has been sidelined while his school tries to discern whether or not he acted appropriately, or even at all, in handling the domestic abuse allegations against wide receiver coach Zach Smith. At Maryland, head coach D.J. Durkin is also on leave while the program deals with the fallout of disturbing allegations of player abuse in the wake of the death of lineman Jordan McNair. Already, strength coach Rick Court is no longer with the school and more changes could be pending.

If these stories seem all too sad and familiar, it’s because we seemingly can only go so many weeks and months between major scandals rocking the college coaching ranks. It’s like its own Mad Libs, where the variables are the coach, the school, and what the scandal happens to be about.

A coach who lies and/or tries to cover up something so it doesn’t embarrass their program?

A coach who enables bad behavior?

A coach who takes things too far in mentally, verbally or physically abusing players?

One year it’s Urban Meyer and D.J. Durkin in the spotlight. In past times, it was Joe Paterno or Mike Rice. Or Art Briles or Dave Bliss. Or Woody Hayes or Bobby Knight. The list goes on and on and on. Specifically within college football and men’s college basketball, it seems there are plenty of names and scandals that fall along similar lines that aren’t as deeply etched into the collective memory of sports fans.

For example, in 2016 Morehead State basketball coach Sean Woods resigned after multiple players alleged abusive behavior towards them during a game. The incident even resulted in a battery charge against Woods, which was later diverted. Earlier this year, Woods was named the head coach at Southern University.

In 2010, Jim Leavitt was fired as South Florida football head coach after it was discovered that he not only struck a player during a game, but also interfered in the school’s investigation. Leavitt is currently the defensive coordinator at the University of Oregon. The player he struck, Joel Miller, didn’t find it as easy to move on with his own life as Leavitt did.

Those are just two examples of many of college coaches who have stepped over the line and grossly abused their power by physically harming their own athletes. Sorry, “student-athletes.” We have to remember that these young people aren’t even getting paid for the abuse that they receive.

In 2016 the Drake Group published a paper looking at the continued problem surrounding what they called, “Athletic Governance Organization and Institutional Responsibilities Related to Professional Coaching Conduct.” The report two years later rings hauntingly true and covers more sports than just football and basketball. There is a lack of institutional control within college athletics. But it’s not with regard to the NCAA rulebook. It’s with regards to the coaches and the power structures that enable them.

The Drake Group examined the rules of athletic governance organizations related to coaching misconduct and found them non-existent except with regard to recruiting and extra benefits limitations. The obligations of coaches as professionals are neither documented nor policed by any professional or licensing organization for coaching. Higher education institution codes of conduct applicable to faculty and staff were also examined and found to be too generic and insufficient to address the elevated risks that exist in athletic programs. Further, the importance of winning  athletics contests, the multimillion dollar investment in high profile coaches, the relative isolation of athletics practices and locker rooms, which, by nature, are secretive and hidden from public view, and institutions’ practice of allowing coaches to resign without exposure to protect the institution’s brand, create significant conflict-of-interest concerns about the investigation and adjudication of misconduct. Lastly, the extraordinary power of a coach in athletic settings, with control over access to skill- instructional time, the granting and renewal of athletics financial aid, and decisions related to playing time creates a student/coach power differential that is far greater than the differential between student and professor, potentially leading to “quid pro quo” situations. All of these considerations argue for ensuring that athletes are protected from abuse.

The Drake Group believes that most coaches act responsibly and in the best interests of their players. Even when using now-unacceptable pedagogy, most coaches do so without malicious intent. However, adequate evidence shows that the coaching profession is without clear and consistent standards and that absent such guidelines, too many coaches, albeit a minority, are crossing the line that separates good practice from harm to athletes. Because professional coaching organizations enforce no national coaching standards, national collegiate athletic governance associations must step into this void. School and college administrators need to know these standards in order to exercise proper supervision and address the serious instances of coaching misconduct increasingly reported in the media. Clear and consistent standards coupled with the assignment of education and enforcement responsibilities are needed to protect college athletes.

One of the recommendations of the group was a college coaching code of ethics. Unfortunately, what has been revealed this month has been the reality of a much different code – a code that protects the coaching profession above anything or anyone else.

Why else would Urban Meyer say at Big Ten media day, “I know nothing about it” in regards to the allegations against Zach Smith? Why would he completely contradict everything he said a week earlier in his Twitter statement after being placed on administrative leave?

Meyer went on to say in his prepared Twitter statement that he didn’t mean to say “anything inaccurate or misleading” at his press conference, but it’s impossible to know whether that’s really the case or not, because we don’t know which Urban Meyer was telling the truth. All we know is that Meyer clearly felt the need to protect Zach Smith, the grandson of Meyer’s coaching mentor Earle Bruce, or himself from something.

A comment that may be even more telling about the systemic issues within the coaching ranks came from a coach not even presently involved in scandal – South Carolina’s Will Muschamp. He used to coach with Durkin at Florida and came to his fellow coach’s defense. Instead of expressing any kind of sympathy for the players alleging abuse, Muschamp bashed ESPN’s use of anonymous sources, calling the whistleblowers “gutless.” Muschamp also called out potential disgruntled players and a “lack of journalistic integrity.”

Only two days later, when asked about the backlash to his wildly insensitive comments, did Muschamp offer his “thoughts and prayers” to the McNair family.

#Gamecocks @CoachWMuschamp delivered a fiery response to a question about an @espn story, which portrays the Maryland football program under DJ Durkin in a bad light. Durkin used to work w/ coach. "There’s no credibility in anonymous sources. I think that's gutless." @wis10 pic.twitter.com/ny60Xb8jIO

When the first thought of a football coach is to circle the wagons and vehemently protect their own, and when that coach has to be given a second chance to spare a single thought for a player who died, it is a troubling insight into a broken system.

A system where athletes all too easily are treated without any care for their personhood, and where even coaches who are known abusers get a lifeline. A system where coaches have 100 percent of the power and players dare not speak up or speak out for fear of losing their spot, their scholarship, or who knows what else.

The current NCAA model certainly leads itself to this power imbalance where unpaid student-athletes are forced to take instructions from highly-paid coaches even if it’s against their own well-being. Yes, there are coaches who do the right thing and take proper care of their players. Perhaps it’s not fair to paint the entire profession with this broad brushstroke. However, the alarming sheer number of scandals across college athletics means that some proactive measures must be put into place.

It is up to the NCAA or conference administrators to put checks and balances in place to make sure bad actors aren’t given free reign when they are fail in caring for the well-being of student-athletes. Something must be done before the next strength and conditioning coach goes too far in pushing student-athletes past their limits. Or before the next head coach puts his hands on an athlete in a violent manner in the locker room. Something simply must be done now because it’s already too late.