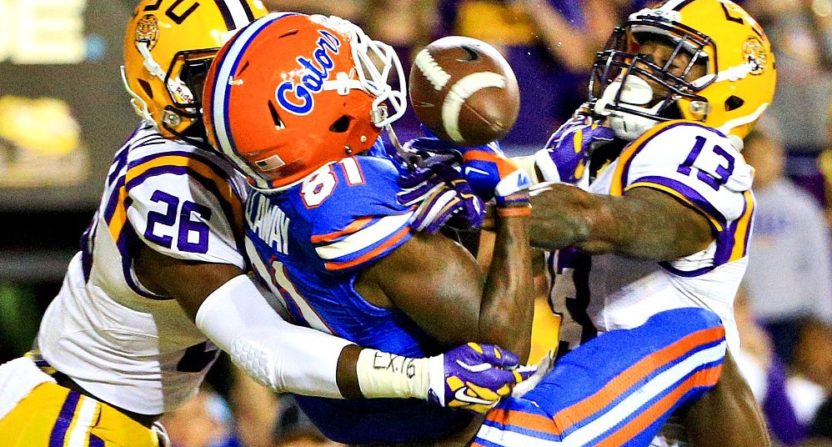 Our season is turning around after struggles during the first two weeks on the college football schedule. But for the past three weeks, our picks against the spread have done well.

Last week’s strong 5-1 showing brings us to 17-14 ATS on the season. Here’s who we like for Week 7 in college football.

That line is begging you to take Florida. Ask yourself. What does Florida do well? The Gators defense has been mediocre. The Gators offense has been mediocre. They needed touchdowns in the final minute to edge not-so-great Tennessee and Kentucky teams. Vanderbilt was a one-score game until Florida pulled away late. Two pick-sixes made the Michigan scoreline more flattering than it should have been. LSU moved the ball against Troy. They beat themselves with four turnovers, going 0-9 on third down, and a missed field goal. Derrius Guice is back this week. LSU has nothing to lose, still has a solid pass defense, and Florida won’t be able to overpower them.

Let’s look at the schedules. Florida State has played Alabama, a ranked N.C. State team and what was a 4-0 Wake Forest on the road. Miami has played Bethune, Toledo, and Duke. There’s a good chance we’re overvaluing Miami and undervaluing Florida State. The Seminoles have won seven in a row. There are some strong gambling trends in this series: trust the underdog, take the under, and expect the game to come down to a field goal. FSU’s defense should hold up. Getting points at home is too good to pass up.

Instant historicism is a scourge. But folks are touting this team as Nick Saban’s best. Alabama has outscored SEC opponents 125-3 and Power 5 opponents 149-10. The Crimson Tide are better at both things Texas A&M does well: running the ball and stopping the run. The Aggies can’t do much else. Alabama can. For all the 12th Man talk, Texas A&M has been worse at home in the SEC under Sumlin. The Aggies are 14-23 ATS at home under him, 1-4 ATS as a home underdog. Nick Saban is 24-13 ATS as a road favorite since 2008. What does Texas A&M do to keep this game close? Alabama. Big.

This is not last year’s Colorado team. The Buffaloes lost a lot on defense, not to mention coordinator Jim Leavitt. They are 0-2 in Pac-12 play. Rich Rodriguez may have something rumbling under the radar at Arizona. The Wildcats lost 30-24 to a ranked Utah team. That was despite five turnovers, missing two field goals, and having another drive stall out on downs at the Utah 25. Washington did some serious damage on the ground against Colorado. Arizona should do the same.

San Diego State has been running out of gas for a couple of weeks now. The Aztecs offense converted only 4/25 third downs against Air Force and Northern Illinois. SDSU beat Northern Illinois 34-28 last week. They needed a kick return TD, a pick six, and being set up for a short touchdown drive on the Husky 33-yard-line to do it. UNLV has an explosive offense. They have 14 plays of 30-plus yards through four games. Freshman QB Armani Rogers is averaging 11-plus yards/pass in every game not against Ohio State. UNLV is a strong candidate for a backdoor cover if not more.

You don’t just walk into Rentschler Field. Memphis is heading on the road for a short weeknight game. The Tigers’ defense is not good. Memphis’ last two games were a neck-and-neck game with Southern Illinois and getting blown out by UCF. You have preconceptions about Randy Edsall and UConn. They aren’t quite accurate. The Huskies quietly have a proficient passing game. Bryant Shirreffs ranks fourth nationally in passer rating and third in yards/att (11.0). Shootout. Take the points.

Both teams face a tough task playing a short week Thursday night game. Louisville is doing it on the road. The Wolfpack have a strong defensive front. Louisville, without much of an offensive line or conventional run game, struggles against those sorts of fronts. The Cardinals will be one-dimensional, hoping for Lamar Jackson to be Superman. He won’t be able to every drive. The Wolfpack have only turned the ball over twice through five games. Louisville has done so 10 times.