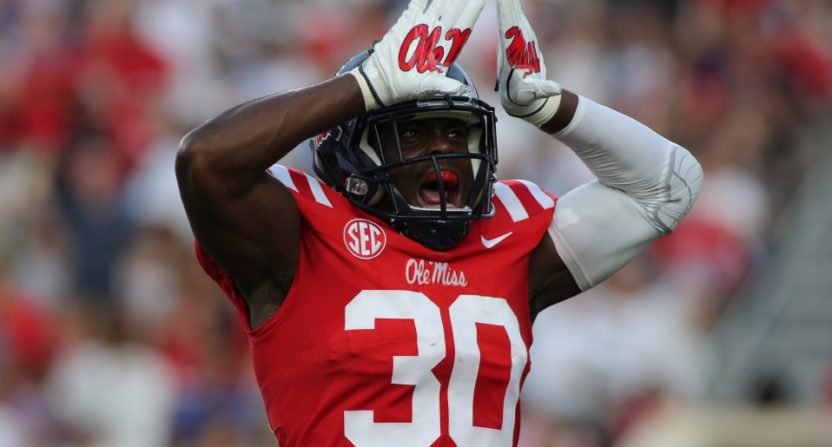 Here’s who we like on the Week 8 college football schedule.

Trust the trap games list here. LSU just played two hard, emotional games with Florida and Auburn. The Tigers still have not had a bye week. What precisely about the past two weeks suggests that LSU should be a road favorite over a halfway decent conference opponent with an offense? Ole Miss had to fly cross-country to play at Cal. They opened conference play with back-to-back road trips to Alabama and Auburn. The Rebels will be confident after dropping 57 on Vanderbilt last weekend, and they have nothing to lose.

Excuse us while we climb to the top of the nearest hillside and scream “LETDOWN” to the point of delirium. Syracuse upset Clemson last week on a weeknight. That was the sort of upset they needed to make a bowl game. Bravo. Miami’s defensive front should be able to handle a not very efficient Orange offense. The Hurricanes have been both efficient and explosive on offense this season. Let’s not get carried away with a Syracuse team that has not had a 50 percent win expectancy performance per S&P+ against a school that does not have “Central” in front of it.

This is a quasi-trap game on the road for West Virginia. They had an emotional comeback win over Texas Tech last week. A home game against Oklahoma State next week. We shouldn’t get too carried away with the Mountaineers. Their three other wins this season came against Kansas, Delaware State, and East Carolina. Baylor’s offense ranks sixth in the S&P+ explosive plays metric. West Virginia’s defense ranks 122nd at allowing explosive plays. This game sounds like a shootout. Take the points.

These next two statements do not contradict each other. Kentucky is 5-1. Kentucky is not that great of a football team relying on one-score, sometimes lucky wins. Dan Mullen’s Bulldogs looked horrible playing two Top 15 teams on the road. They have beaten the heck out of everyone else. Mississippi State should be able to find some balance against Kentucky’s pass defense. The Wildcats can’t run the ball. A big cowbell-aided win for the Bulldogs.

Michigan State does not have a good offense. The Spartans aren’t very efficient. They don’t finish off drives. The have particular trouble running the ball. That’s why the Spartans have been winning games, but not closing them out. Indiana does not have a standout defense, but it has a sufficient one when not playing Ohio State or Penn State for four quarters. Indiana also has 6-foot-4 Simmie Cobbs who is one of the nation’s toughest wide receivers to cover. We saw Indiana come back against Michigan last week in the fourth quarter. Monitor the back door.

Georgia Tech has a sandwich game here. They are coming off a tough loss at Miami. They have a road trip to Clemson the following week. The Yellow Jackets’ best running back KirVonte Benson is an injury concern. Wake Forest has had a bye week to prepare for the option. They are off to a solid 4-2 start with a strong defense. That’s a lot of points in what should be a closer game.

Purdue has been alright. It’s been a phenomenal upgrade. That does not mean the Boilermakers have been phenomenal. This will be the first time they have been a road favorite since 2012. The last time they covered as a road favorite was in 2009. Rutgers has been competitive against teams that were not Ohio State. They are fresh off their first Power 5 win in two years, which came by double digits on the road. Purdue should win this. But, that’s way too many points.