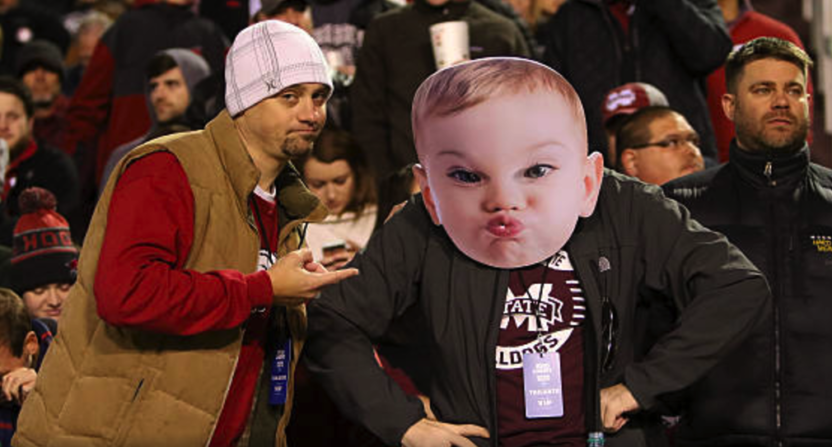 The SEC, collectively, had a rough season in 2016. Alabama did not win the national title. There was a chasm between the Crimson Tide and the rest of the conference. An underwhelming Florida team reached the title game. The Sugar Bowl representative went 8-4.

That was all before a turbulent offseason. It has become so bad that folks believe the ACC has supplanted the SEC as the nation’s best football conference.

Angst will abound in the SEC this season. Multiple programs enter 2017 with coaches on the hot seat. Here are the SEC programs ranked from highest to lowest for fan misery.

14. Ole Miss:
The Rebels have fallen. Ole Miss beat Bama twice and won 10 games en route to the Sugar Bowl in 2015. It was their first AP Top 10 finish since the John Vaught era. Then came last season. Ole Miss blew huge leads against both FSU and Bama. They lost five of seven to close the season, notably a 35-point Egg Bowl debacle (to a four-win Mississippi State) at home. Could there be a worse on-field debacle?

The school forced out Hugh Freeze for not-so-godly extracurricular activities. The NCAA is looming with a hammer. Is there any reason to leave the tailgate?

13. Tennessee:
It’s the offseason. There has been ample time for Tennessee fans to embrace the Butch Jones stabilization project has been a great achievement talking point. But get serious. Tennessee hasn’t finished in the AP Top 10 since 2001. The purportedly elite program has finished in the Top 20 once since 2005. The Vols entered 2016 with veterans, talent, and all the hype. They went 8-4, coughing away a Sugar Bowl trip against Vanderbilt. There’s a new athletic director. It may take just one bad loss (at Florida?) to re-ignite the gasoline-soaked tinder under Butch Jones’ seat.

12. Missouri:
Missouri gets one more season touting their two SEC East division titles since joining the conference. After next year, the narrative could well be “have missed a bowl game four times in six seasons” since joining. Missouri will need an overperforming coach to compete consistently in the SEC. Early returns on Barry Odom suggest he’s no Gary Pinkel. Factor in what’s going on at the rest of the school and it’s just a rough time to be a Mizzou fan. Rumors that the team may try contesting games on both sides of the ball this year are unconfirmed.

11. Arkansas:
Where are the wins, Bert? Bielema has gotten Arkansas rolling on paper (huge in SRS circles). He’s made sound assistant coach hires. Everything has been working for him, except the win-loss column. The Razorbacks have not finished better than 7-5 during a regular season in Bielema’s four seasons. His best team was probably the 2014 team that went 2-6 in a brutal SEC West that year. Arkansas isn’t the best SEC job. But, it’s still one where Houston Nutt and Bobby Petrino produced 10-win seasons.

10. Georgia:
Kirby Smart brought in a sick recruiting class. That provides some talking ammunition during the long offseason. Still, Georgia fans have to sell themselves on a five-loss season with almost-losses to Nicholls State and a dreadful Missouri, after 9-3 ousted Mark Richt, being an indicator of great things to come. Maybe that works for them. Getting back to Richt’s level would then feel like improvement. Let’s revisit if they start slowly and succumb to App. State and/or Notre Dame.

9. Vanderbilt:
James Franklin raised expectations, producing the first ranked seasons in the modern era. Derek Mason has struggled to meet those expectations. The Tennessee win was huge, as it got Vandy to a bowl game. All told, a season where Vanderbilt beat Georgia, Ole Miss, and Tennessee was not a failure. It’s hard to get too down after a year like that, when you root for Vanderbilt, or too up because you root for Vanderbilt.

8. South Carolina:
Steve Spurrier left, which stinks. South Carolina replaced him with Will Muschamp, who flamed out in the same division with far more resources at Florida. Coach Boom was on the hot seat from day one. But the Gamecocks stumbled to six wins last season. They have an improving roster and a good young quarterback. Maybe they upset somebody big this season. Things aren’t where they were, but there are tangible reasons to think they are looking up.

7. Kentucky:
It’s Kentucky. Football season is the long cocktail hour while you’re waiting for the feast during basketball season. The Wildcats have excised every last bit of the Joker Phillips era. They snapped a six-year bowl drought last season. They upset Louisville. Kentucky may even make another bowl game this year. What more would Kentucky fans expect?

6. Auburn:
Auburn is its own unique situation. The burner is always on low. Gus Malzahn’s rough patch is not that far back in the rear view mirror. But right now, they are the sleeper team in the SEC (for what that’s worth) and have a favored breakout Heisman contender at QB in transfer Jarrett Stidham. Expectations like that will get fans excited and amplify the blowback if the Tigers do not meet those expectations.

5. Texas A&M:
Yes, Kevin Sumlin is on the hot seat. He had the misfortune to stumble into a situation with Johnny Manziel and an NFL offensive line that inflated expectations after year one. The repetitive late-season collapses are no fun. But joining the SEC has raised the program’s stature dramatically. They are playing in important games people are watching. That will still happen with someone else being ferried about in the swag copter.

The Aggies have been more relevant than Texas this decade. Is it so bad being a Texas A&M fan? No, it isn’t. Check back in when Herman goes 11-1 and gets Texas to the playoff.

4. Florida:
Florida isn’t “Florida” yet under McElwain. But the Gators have the most stable program in the SEC East, coming off consecutive trips to Atlanta. One could see McElwain entering 2018 on the hot seat if Florida, say, loses to Michigan and FSU, ends up with a Ron Zook-esque 7-8 wins, and doesn’t take a step forward on offense. But we’re not at that point yet.

3. LSU:
August is the ideal time to be an LSU fan. Amnesia sets in. Opinionists pore over recruiting and returning starters. LSU probably has a Heisman candidate running back. Hey, this is the year! This August is ideal since we’re in a lull between the “should LSU keep Les Miles” debate and the “should LSU keep Ed Orgeron” debate after he scuffles a bit against a tough schedule and loses to Bama again.

2. Mississippi State:
Mississippi State is the second happiest? Yes. Dan Mullen is maxing out what you can do in Starkville. He’s taken the Bulldogs to seven-straight bowl games (previous record: three). He had Mississippi State ranked No. 1 nationally at one point. Unless a massive program swoops in to make him at or near the highest-paid coach in the nation (Notre Dame?), he’s staying.

Just as important, rival Ole Miss may be a disaster for the immediate future and, as we mentioned, Mississippi State just beat them by 35 in Oxford, with their completely unheralded QB outperforming Ole Miss’ touted five-star. Even Stingray switched out his mustache for a robust beard. Hail State.

1. Alabama:
Alabama will win the national title or be a few plays away from doing so every season. Need we go on? The only unfortunate things Alabama fans have to deal with are A.J. McCarron’s bad restaurant concepts and racist puns.