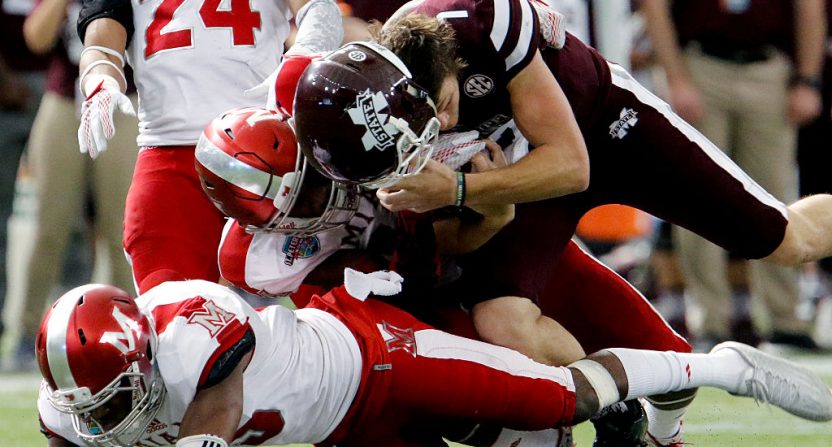 With the number of targeting ejections doubling over the last three years, college football may be changing its rules to make the penalty less common. A new rule proposal would require officials to confirm the penalty on replay in order to eject a player, whereas currently if the penalty is called on the field and there’s not enough evidence to confirm or overrule the call, the player still leaves the game.

Should this rule change pass — we’ll find out in early March — it’s a bit iffy. While an ejection is a large consequence for an individual and a team to pay, the rule is still dealing with player safety. There’s no way to know if it would raise the number of concussions in college football, but there’s certainly no reason to think it would decrease that number either.

“We still want to the official to throw the flag there,” Halpin said. “But if replay says there’s a little bit of contact on the shoulder and it’s more because the player adjusted and it wasn’t a dangerous attempt by the player delivering the contact, then maybe that player deserves to stay in the game. It’s a reasonable thing to go with.”

“There are certainly some [plays] that are deserving,” Berry said. “But there are also some where the receiver is up in the air and the defensive player doesn’t launch, but he’s also changing his vertical plane. Where do you gauge hitting that person? That’s a tough thing to do instantaneously. Athletically, I don’t even know if they’re capable of doing that at the college level. Even the NFL guys can’t pull that off, either.”

Even when replay can neither confirm nor overrule a targeting call, the new rule would still mean a 15-yard penalty even with no ejection. So it’s not like the NCAA is trying to let its players get away totally free with potentially questionable hits.

But before worrying so much about ejections, the NCAA might want to spend more time fixing the concussion issue.