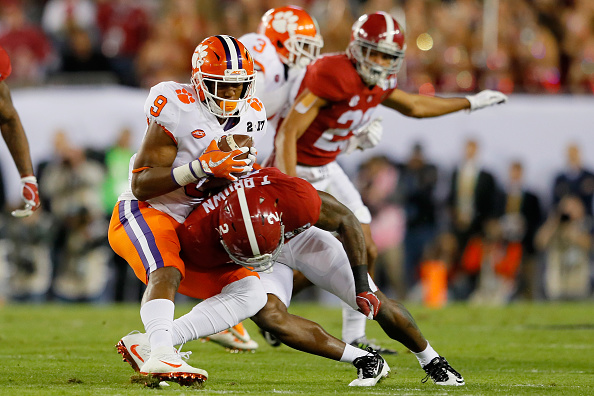 The College Football Playoff Committee announced the four teams that would play for the sport’s national championship this week and this time, it counted. At-large Alabama was their No. 4 seed, thus sending Big Ten champ Ohio State to a consolation bowl.

It was the committee’s most controversial decision since the last time there was a decision to make in 2014 when the committee passed on the TCU/Baylor choice and took Ohio State.

This controversy does not stem from injustice. Alabama, however much on accrued reputation from seasons past, passed most people’s eye test ahead of Ohio State. Or perhaps the Tide passed a reputation test. It’s not clear how many were watching Bama because they weren’t playing anyone.

Sunday’s decision was controversial because it contradicted everything the committee had done before. In past seasons, the committee placed a heavy weight on quality wins and conference championships. Ohio State had both. Alabama had none. Instead of rewarding tough schedules, the committee reverted to the argument that it would’ve made far more sense to schedule Tulsa rather than Oklahoma. Had Ohio State done that, the Buckeyes would have been in the field.

Buckeyes fans may feel doubly aggrieved because the most similar team to 2017 Alabama in the playoff era was 2015 Ohio State. That team was among the four best on ability. It had the pedigree of winning the playoff the season before. That team’s loss, by three points to a Top 10 MSU squad, was less damning than Alabama’s. Its best win, by 29 on the road at a Top 10 Michigan team, was better than anything Alabama put forth this season. The committee ranked that Ohio State team seventh because it didn’t win its division.

The committee’s bold departure from precedent surprised many who did not feel the committee had it in them. But the choice also made little business sense. This is a crucial year for the playoff to rebound with big ratings for ESPN. That would have been more probable with Ohio State in the field.

Not having Ohio State leaves the playoff without a significant ratings brand. Alabama is important. But there’s no casual SEC fanbase. They watch, come what may. They were already on board with Georgia in the field. Alabama does not add anything ratings-wise.

Ohio State brings casual fans from the Northeast and Midwest with it. Four of the top seven audiences for Playoff/BCS title games came when Ohio State was playing. Two of the other three involved Texas. One could extrapolate Michigan and Notre Dame would also have that type of impact, but that’s it. It’s no exaggeration to say the difference between Alabama and Ohio State in the field could be a few million viewers.

This field avoided one unpopular pitfall: rematches. Auburn having played both Clemson and Alabama during the regular season could have been a major issue. An Iron Bowl rematch would have seen the ratings crater. From a rematch perspective, Clemson-Alabama in an opening round is better than Clemson-Ohio State. Most importantly, it guarantees those schools won’t meet in the final for a third straight season. The first two meetings did not rate well.

But this field has another potential flaw. It is about as regional as college football could have produced. Interregional conflict is a more attractive selling point. Georgia and Alabama are SEC teams. Clemson, located in an SEC state, is about as close as one can come to being an SEC team without being in the conference. Oklahoma is not in the “South,” per se. But it borders three SEC states. Wherever one views it, OU does not bring another region along with it.

There’s little reason for the Midwest, Northeast, or West Coast to get invested in this tournament. That may not diminish the enjoyment of SEC fans any. But it should hurt the ratings and ESPN’s bottom line. Note that the Auburn-Oregon BCS title game in 2010 drew a bigger audience than either Alabama-Clemson game.

This will be the fourth iteration of the College Football Playoff. First-year ratings were great. The next two years were dreadful. ESPN invested hundreds of millions per year in this event. The network spent entire seasons relentlessly promoting it. Ratings for the final in year two or three were no better than a BCS title game.

No structural reasons will impede this year’s games rating well. The semifinals are on New Year’s Day instead of New Year’s Eve. The bowls involved are the Rose and the Sugar. College football is not enduring any political campaign against it. If the playoff games don’t rate better this postseason, it will be a sign that the event, as currently constituted, just isn’t that popular.

Rejecting Ohio State cost ESPN a needed ratings boost. Choosing Alabama negated any claim to precedent and credibility that the committee process had. The Big Ten, one of the principal organizers of the event, will be livid. This choice wounded the four-team format. The only question whether the wound is in the foot or somewhere more severe.