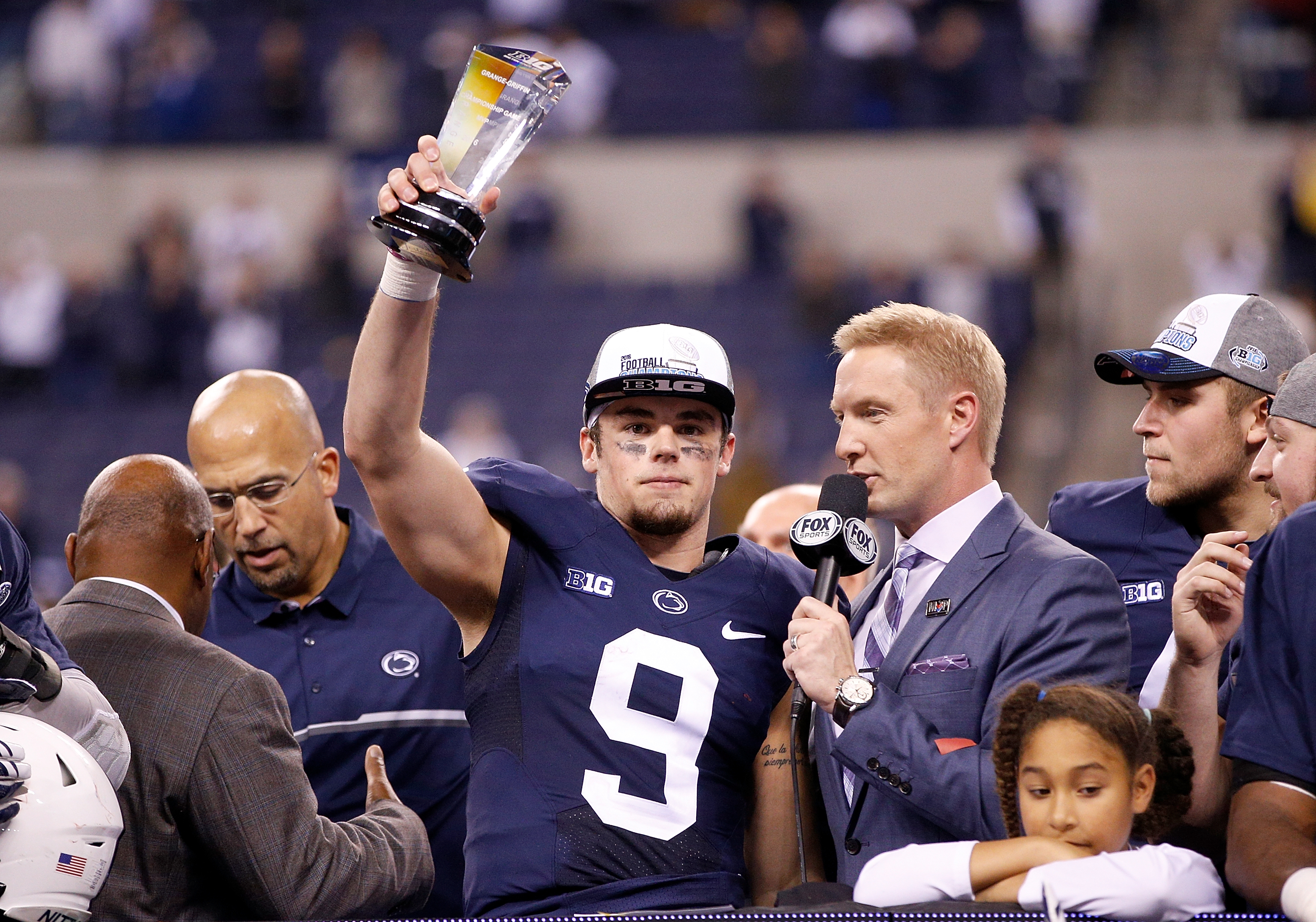 The College Football Playoff Committee was already faced with an impossible task this year: plug five teams into four slots. But in the three years the committee has been in existence, they haven’t done themselves any favors in making their job easier.

We all welcomed the advent of the College Football Playoff and the doubling in size of the national championship competition from two teams to four. And most of us would agree that the current system is leaps and bounds better than the old BCS and it’s fantastic to have complicated, secretive computer rankings replaced with real live functioning human beings.

However, the new system is not perfect either. In fact, it’s not even close. And much of it has to do with the actions of the committee itself.

There’s nothing fundamentally wrong with having a panel of very smart people selecting the top four teams in the nation who earn a right to play for a national championship. What has gone wrong is that the College Football Playoff selection committee hasn’t even listened to their own criteria for picking the four teams who advance. And what’s more, they’ve gone back and forth on valuing things like conference championship games and non-conference strength of schedule to the point that nobody knows what exactly you have to do to be considered for the playoff.

Spare a thought for the Big 12, who has been sitting on the sidelines for two of the first three seasons of the College Football Playoff. Commissioner Bob Bowlsby wasn’t necessarily arguing for Oklahoma to make the final four this year, but he is at a loss for what the conference should do moving forward to ensure its teams are in the best position to get in the Playoff and win. He had this to say via ESPN after the committee left out Big Ten champion Penn State in favor of at-large selection Ohio State and Pac 12 champion Washington.

“Obviously I acknowledge the difficulty of the task, but I’m not sure what I advise my members right now, because we’ve been telling them that nonconference schedules matter, and one of the four has an exceedingly weak nonconference schedule,” he said, referring to No. 4 Washington, which notched wins over Rutgers, Idaho and FCS Portland State. “And we’ve been telling them the 13th data point matters, and we added a conference championship game because of that. We’ve always heard that conference championships matter and division championships matter, and now it’s confusing.”

It was just a couple years ago during the first year of the playoff that the Big 12 was left out with both Baylor and TCU on the outside looking in because the conference didn’t have a championship game and couldn’t decide who its “one true champion” should be. Ohio State played and beat Wisconsin in the Big Ten Championship Game and vaulted into the Playoff ahead of TCU and Baylor in 2014. This is what Bowlsby said after the committee’s decision that year:

“It’s clear that we were penalized for not having a postseason championship game, and it would have been nice to have been told that ahead of time,” Bowlsby said. “We made the impression that we had a different model, but it wasn’t one that was going to penalize us. I think it’s clear that it did, and I think it was even said that it did. That will cause us to go back to the drawing board a little bit and talk about whether or not we need to think about a different model.”

Now in 2016, Penn State’s victory in their conference championship game over No. 6 Wisconsin seems to have been totally meaningless and Ohio State was basically rewarded for not having to risk defeat being able to watch at home.

It’s confusing because the committee doesn’t follow their own selection criteria. Here it is, via the official College Football Playoff website. 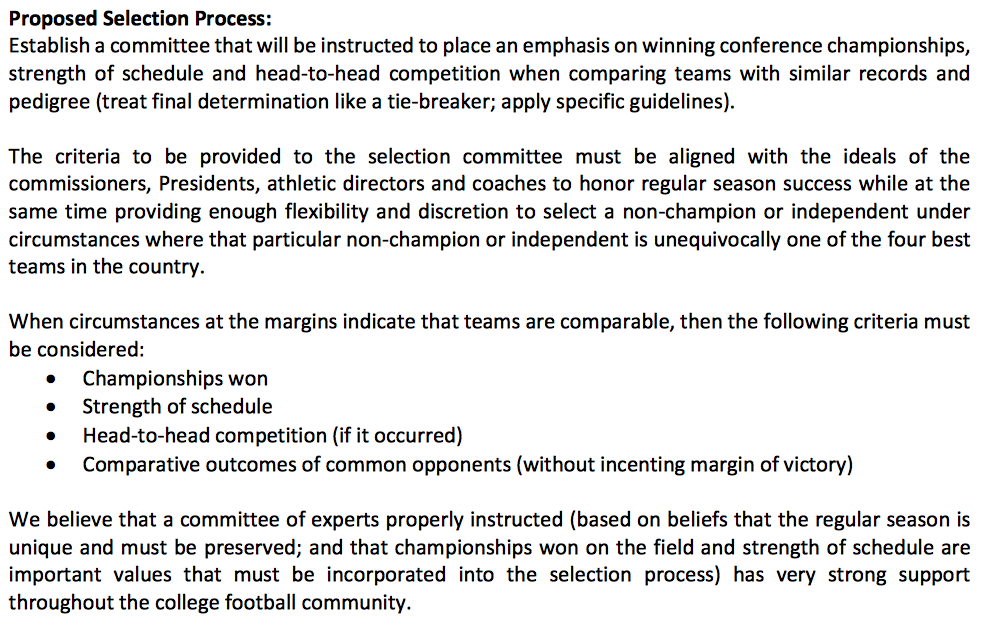 Unless, of course, the committee doesn’t think Penn State and Ohio State are really “comparable” and the Buckeyes surpass all of the listed criteria because the teams don’t have a “similar record and pedigree.” Those are the words you may not pay as much attention to in the opening paragraph. Given Ohio State’s No. 3 ranking in the final committee decision, that’s probably the case.

But what about Penn State’s argument against the No. 4 team, Washington? Clearly there was some debate there, the committee has admitted as much. Both of those teams have a conference championship and the Nittany Lions have the edge on the committee’s second listed criteria of “strength of schedule.” The committee said in the post-selection debrief that it was indeed a factor, but not enough to lift Penn State over Washington.

“Had Washington had a stronger strength of schedule, I don’t think the conversation and discussion would have been as difficult,” Hocutt said. “We looked at key statistical categories, which translate to performance on the field each week — statistical values that we see value in. Washington has the advantage. We talked about performance and what the coaches [on the committee] say over the course of 13 games, and Washington seemed to have the advantage.”

Do you see on the list of published criteria an item called “key statistical categories”? No, but you do see strength of schedule. And Penn State has a very decisive edge there, especially in the non-conference realm. This year, Washington scheduled Rutgers, Idaho, and Portland State. Penn State scheduled Kent State, Pittsburgh (one of their two losses), and Temple.

Had Penn State scheduled a laughable out-of-conference slate like Washington did, they just might be in the playoff today with one loss instead of two. So what’s the message that the committee is sending? At least in this debate, it was clearly beneficial for Washington to take the easy way out in their scheduling and take their chances in winning the Pac-12 versus playing a tough non-conference schedule.

Again, even in its short history, this is not what the committee has historically held up. Back in 2014, then-chair Jeff Long hinted at its importance when he said this about the non-conference schedule question:

“We as a committee are not charged with sending messages to coaches and ADs about scheduling, but I think it’s likely that they will see the factors that we take into account and will take a message from that,” Long said on Nov. 11.

That was the year during which Baylor was left out in favor of eventual national champion Ohio State and played SMU, Northwestern State, and Buffalo in their non-conference schedule.

None of this is to say that the committee necessarily got it “wrong” by picking Alabama, Clemson, Ohio State, and Washington. This is a subjective process, after all. But it is to say that the committee is sending incredibly powerful mixed signals to college football programs and fans around America as to what criteria they are using exactly to select teams for the playoff. The signals they’re sending are that they are making it up as they go along, just like when both Baylor and Ohio State leapfrogged TCU in the final week of the rankings in 2014 after being ranked behind them for six consecutive weeks.

If conference titles really aren’t as important as win-loss record and quality wins, then so be it. If it’s mysterious things like “game control” and “statistical values” instead of strength of schedule, then so be it. Any of those criteria are valid and reasonable to use in making this judgment call.

But if that is indeed the case, then the committee needs to give voice to what is really going on here instead of holding up criteria they selectively follow. If it’s all about picking the “four best teams,” then just erase the “selection protocol” paragraphs and chisel those words into stone.

Because until there is any mechanism for teams automatically qualifying for the Playoff (like an eight-team field with all the Power Five champions getting an auto bid and three at-large bids), this is the best we’ve got. And it would help us all if the committee would be more consistent in letting us all know what exactly is going on.